The U.S. stock market has been home to plenty of particularly overpriced companies over the last several months, and in turn, finding cheap stocks with promising growth potential hasn't been an easy task. The best game plan often involves filling your portfolio with a variety of stocks from different sectors while leveraging a combination of investment strategies. While growth and dividend stocks may be at the top of your buy list, value stocks can also be excellent additions to strengthen and expand your portfolio.

When I refer to value stocks, I'm talking about companies that are affordably priced in the context of their past revenue and prospects for future growth. Let's take a look at three value stocks that could help your portfolio succeed in all states of the stock market. 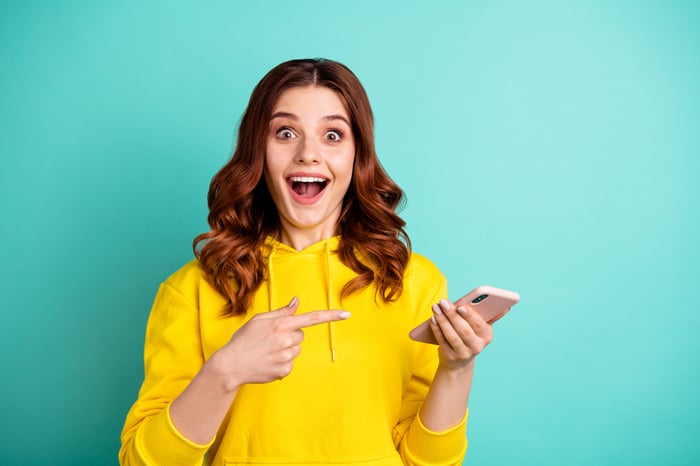 Shares of Gilead Sciences (NASDAQ:GILD) have fluctuated considerably this year. But as of Nov. 9, the stock is down about 8.25% from January and trading at approximately $60 per share.

That loss seems strange in the context that investors were abuzz over Gilead Sciences late last month when the company's antiviral, remdesivir (also known as Veklury), became the first COVID-19 treatment to be approved by the U.S. Food and Drug Administration (FDA). Currently, remdesivir is approved for adults and children at least 12 years of age who have been hospitalized with the novel coronavirus. Remdesivir is expected to be a blockbuster drug for Gilead, due in large part to the considerable price tag for each treatment course, which ranges from $2,340 to $3,210.

When the company released its third quarter results for the three-month period ending Sep. 30, it reported that remdesivir had amassed product sales of $873 million during that window. Factoring in sales of remdesivir during the third quarter, Gilead's total revenue for the period ($6.6 billion) was up 17% year over year. This is a considerable improvement from Gilead's second quarter revenues, which were actually down 10% compared to the second quarter in 2019.

Besides the impact of remdesivir sales, there were a few other key catalysts that propelled the company's stellar third quarter results and will be notable factors for continued growth. Gilead reported third quarter product sales in its HIV and cell therapy businesses up 8% and 25% year over year. Notable third quarter revenue drivers for Gilead included HIV drugs Atripla, Biktarvy, Descovy, and Truvada, which achieved product sales of $113 million, $1.9 billion, $508 million, and $509 million respectively.

The company's current pipeline encompasses 42 clinical stage programs, including HIV and oncological cell therapy drugs. It's also important to mention that Gilead's $21 billion acquisition of biotechnology company Immunomedics, which closed last month, brought the newly launched "first-in-class" cancer drug Trodelvy into its stable of products. Trodelvy was given accelerated approval by the FDA in April for treatment of adult patients with metastatic triple-negative breast cancer, and amassed revenues of $20 million during during the second quarter -- its first few months on the market. The drug is currently being studied for new indications and should provide another vital source of future revenue growth for Gilead.

Gilead Sciences has $26 billion in cash and cash equivalents on its balance sheet compared to its outstanding long-term liabilities of $34 billion. Investors in search of dividend income will be pleased with the company's 4.6% yield -- considerably above the 2% yield paid out by the average stock on the S&P 500.

While certain sectors of the stock market have struggled tremendously due to the impact of COVID-19, many consumer goods companies have seen new success from to demand for their staple products during the pandemic. General Mills (NYSE:GIS) is one such stock.

The company reported its financial results for fiscal year 2020 on July 1. During the fiscal year, the last few months of which were at the height of the pandemic, the company reported a 5% increase in its net sales compared to fiscal 2019. Its operating profits were also up 17% year over year, while cash from operations increased by 31% from fiscal 2019. Management noted that its net sales were positively affected by "elevated at-home food demand" during the final quarter of fiscal 2020 as a result of the COVID-19 pandemic. General Mills also grew its gross margin for fiscal 2020 by a notable 70 basis points, capturing 35% of its net sales for the year.

The company's financial situation was even brighter during the first fiscal quarter of 2021, which ended on Aug. 30. Net sales were up 9% year over year, while General Mills boosted its gross margin by 170 basis points, which captured 36% of its total net sales for the quarter. The company's operating profits during the quarter also rose 29% compared to the same stretch in fiscal 2020. Sales in the company's North America, Europe and Australia, and Asia and Latin America segments were up 14%, 8%, and 6% year over year, respectively.

General Mills is up 11% year to date at approximately $60. If you're in search of a dividend-paying stock, the company also boasts a robust payout that yields a healthy 3.4%. 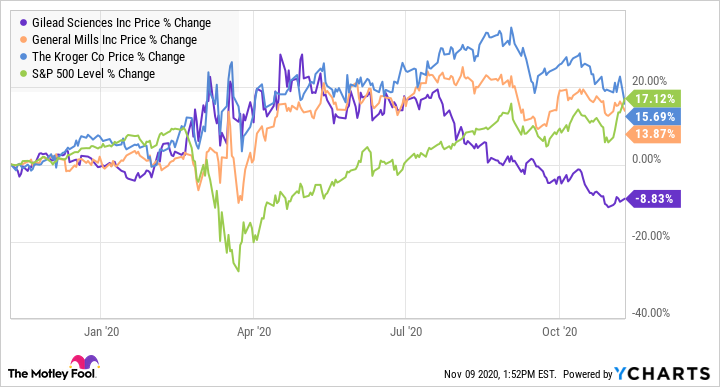 Another popular consumer goods stock, Kroger (NYSE:KR) has had an unbelievably good year. The 137-year-old company is the cheapest on this list and trades at just around $30 per share and at only 10 times earnings.

During the second quarter of this year, which ended on Aug. 15., Kroger reported an astonishing year-over increase in digital sales of 127%. The company's total sales for the quarter were up 14% year over year at $31 billion. Although management is remaining cautious regarding its full-year guidance, they expect to grow the company's identical sales by more than 13% and for its adjusted earnings per share (EPS) to increase by as much as 50%. The company's balance sheet is looking good -- its total assets ($47.5 billion) far outweigh its total current liabilities ($14.5 billion). Kroger is also in a great position cash-wise, with $372 million in cash on its balance sheet at the close of the second quarter.

Although Kroger's dividend isn't one to write home about (2.2%), analysts are confident about the company's continued growth prospects. They project that the company will grow its earnings by 8% every year for the next five years alone. With market uncertainty still abound, if you're looking to recession-proof your portfolio for the long haul, this reliable stock certainly makes the cut.