Walmart (NYSE:WMT) said today that it is teaming up with Cruise, the autonomous-vehicle company controlled by General Motors (NYSE:GM), in its latest experiment with self-driving delivery vehicles.

Walmart said that it has agreed to a pilot program with Cruise, to start early next year, in which Cruise's self-driving vehicles will make contact-free deliveries to Walmart customers from local stores in Scottsdale, Arizona. 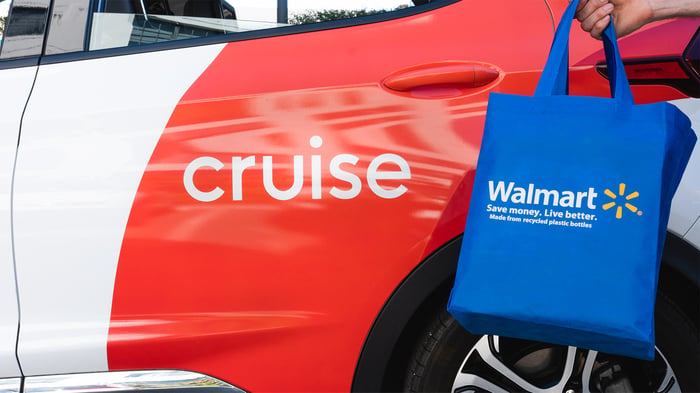 Some Walmart customers in Arizona will soon be able to receive deliveries from Cruise's automated taxis. Image source: Walmart.

In a blog post, Walmart senior vice president Tom Ward said that Cruise's use of electric vehicles was part of the attraction for the retail giant.

"What's unique about Cruise is they're the only self-driving car company to operate an entire fleet of all-electric vehicles powered with 100% renewable energy, which supports our road to zero emissions by 2040," Ward wrote.

The pilot builds on Walmart's Express Delivery local-delivery program, launched in April, and could be expanded later next year if all goes well. Express Delivery is currently offered at roughly 2,800 U.S. Walmart stores, the company said.

For Walmart, which has held similar tests with other self-driving companies, the move is a way to further hedge against online rival Amazon (NASDAQ:AMZN), which recently purchased self-driving vehicle start-up Zoox.

For Cruise, the Walmart deal represents a potential opportunity to diversify beyond automated ridesharing taxis, its primary focus. The company, which is controlled by GM and counts Honda (NYSE: HMC) among its investors, is working to complete development of a self-driving taxi based on GM's electric Chevrolet Bolt.