Please ensure Javascript is enabled for purposes of website accessibility
Log In Help Join The Motley Fool
Free Article Join Over 1 Million Premium Members And Get More In-Depth Stock Guidance and Research
By Jim Halley - Nov 17, 2020 at 7:39AM

These two companies are battling for market share of continuous glucose monitoring devices for diabetes, with each coming out with new models soon.

Medical device makers Abbott Laboratories (ABT -1.00%) and DexCom (DXCM -6.87%) are hoping small products can have a big effect for patients and investors alike; both companies have new, sleeker continuous glucose monitoring devices (CGMs) in the works. Diabetes is one of the most prevalent diseases in the world, with 700 million people expected to be living with it by 2045, according to the International Diabetes Federation.

There are 34 million diabetics in the United States, with 1.5 million people newly diagnosed each year. Many diabetics are turning to CGMs -- which provide real-time monitoring, rather than requiring a finger prick -- to ensure their blood sugar is at a healthy level. Companies that sell CGMs can expect both growth and competition in the space; the compound annual growth rate is expected to be roughly 22% through 2027, according to one study. 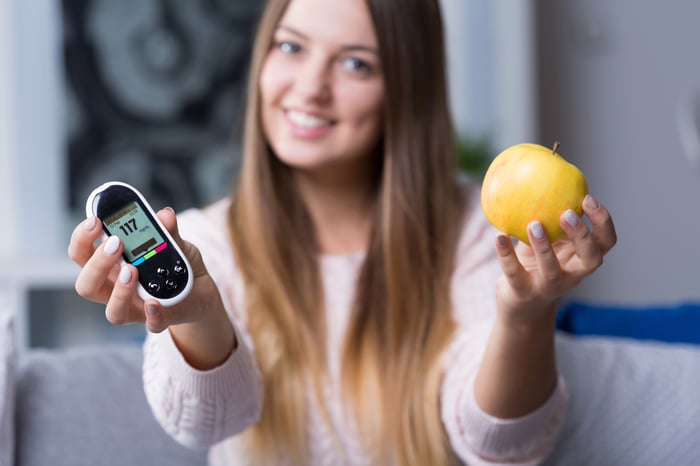 There are several explanations for the stock's recent decline. For one, it's facing increased competitive pressure in the CGM space from Abbott, which recently launched its Freestyle Libre 3 device in Europe and will do so in the U.S. soon.

DexCom's current GCM model, the G6, uses sensors that must be replaced every 10 days, with a cost that can run to $3,828 per year before insurance. Abbott's Freestyle Libre 2 and Libre 3 have sensors that are designed to be changed every 14 days, so the annual cost for the sensors is typically $2,398. However, DexCom said it expects to launch its G7 GCM device early next year; this one is also designed to be worn for two weeks, making its sensors less expensive. It will also be very small, about the size of a nickel (Abbott's Libre 3 is said to be the size of two stacked pennies).

Another factor that may be weighing on DexCom stock is analyst concern about healthcare reform -- specifically, the worry that President-elect Joe Biden's administration will target the high costs of CGM devices. The most likely reason for the stock's fall, however, is that its earnings, as good as they have been, don't justify the stock's price. Its price-to-earnings (P/E) ratio is sky-high compared with industry competitors Abbott and Medtronic.

However, that P/E of 140 is misleading by itself, because it doesn't take into account DexCom's anticipated growth. If you look at its forward price-to-earnings-to-growth ratio of 0.633, the company's share price is actually not out of line, although it's still higher than Abbott's. 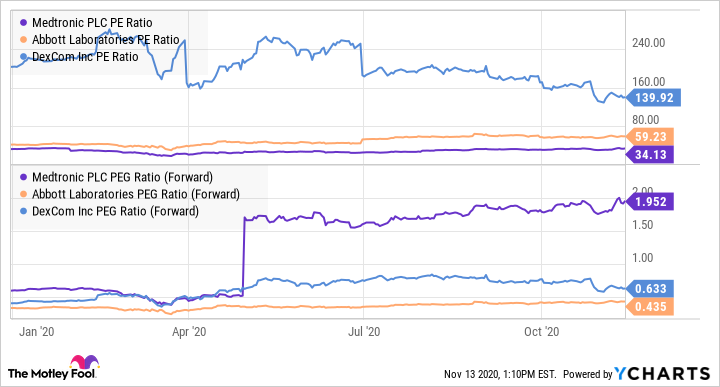 The case for Abbott Laboratories

Abbott's market cap is six times larger than DexCom's, and the former company is more diverse. It has four divisions: nutrition, diagnostics, established pharmaceuticals, and medical devices. CGMs are just part of the company's medical device sales. The company said its diabetes care offerings brought in $843 million in the third quarter, a little bit more than 9.4% of its $8.9 billion in overall sales.

All that size will likely limit stratospheric growth, however. That $8.9 billion was a 9.6% better than the year before; Abbott's net earnings of $2.3 billion, meanwhile, were down 11.7% year over year. The company's most effective division in the quarter was diagnostics, which it said saw 38.2% growth year over year, primarily because of a boost from its COVID-19 diagnostic tests.

During the quarter, Abbott launched FreeStyle Libre 2 in the United States and obtained Europe's CE Mark approval for the FreeStyle Libre 3. One big advantage in Abbott stock is it comes with one of the industry's most consistent dividends. A Dividend Aristocrat, the company has raised its dividend every year for the past 48 years. This year, it increased its quarterly payout to $0.36 per share; at current prices, that works out to a yield of about 1.3% and a sustainable payout ratio of 44.4% (trailing 12 months).

Abbott's diversity and greater size give it an edge

While it may not see the rapid growth that could yet come for DexCom, Abbott's other healthcare divisions divisions give it strength to weather financial storms. Also, comparing the two stocks, it's easy to make the case that its stock is better priced. On top of that, the company's dividend, though not overly generous, is consistent, safe, and gives investors another reason to hold onto the stock for the long run.

However, DexCom is more of a growth stock, and if its new G7 launch is successful, its stock has a lot more short-term upside than Abbott's. Which one is better for you may depend on how risk-averse you are.