You might have thought that SmileDirectClub (NASDAQ:SDC) would be running circles around its top rival, Align Technology, thanks to the COVID-19 pandemic. That hasn't been the case, though, so far this year. Align's shares have soared nearly 64% with a big gain in October following the company's announcement of strong Q3 results. SmileDirectClub stock, meanwhile, is up only 13% year to date.

But SmileDirectClub had its turn to report third-quarter results after the market closed on Monday. Did the oral-care company give investors plenty to smile about? Here are the highlights from SmileDirectClub's Q3 update. 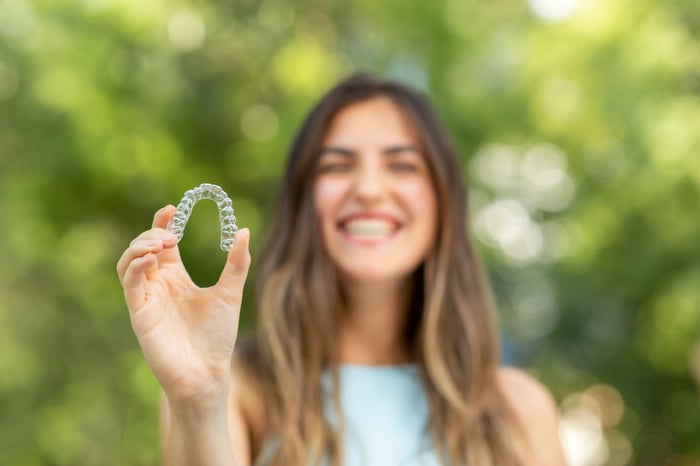 SmileDirectClub reported revenue in the third quarter of $169 million. This was result was lower than the company's revenue of $180.2 million in the prior-year period. However, it easily topped the Wall Street consensus revenue estimate of $146.2 million.

SmileDirectClub clearly isn't immune to the negative headwinds from the COVID-19 pandemic. However, it also appears that the company is rebounding solidly.

Its average aligner gross sales price (ASP) is holding up quite well. SmileDirectClub reported an ASP of $1,794 in the third quarter of 2020, up from $1,788 in the prior-year period.

SmileDirectClub CEO David Katzman said that his company's performance in the third quarter "was continued validation of the strength of our business model and the power of the competitive moats around our platform." He added that the performance "also demonstrated our continued focus on controlled growth with profitability."

There are several factors that could work to SmileDirectClub's advantage and propel the healthcare stock to greater heights. In particular, the increased acceptance of telehealth (especially teledentistry) should be a strong tailwind. The continued uptick in the adoption of clear aligners should also help SmileDirectClub.

The company didn't provide detailed financial guidance. However, it continues to shoot for annualized revenue growth of between 20% and 30%. If the favorable industry dynamics continue, achieving that goal should be attainable for SmileDirectClub.