Those who bought (and held) the Canadian shares of pot producer Canopy Growth (TSX:WEED) (NASDAQ:CGC) in early 2014 have seen their stock's value increase by a cumulative 1,490% as of Nov. 12. However, first investors in Canopy Growth's U.S. listing were not so lucky; the stock is down more than 16% from its U.S. debut on May 24, 2018.

What happened in those four years? Much of the discrepancy in price is because investors overestimated Canopy's potential in the run-up before the legalization of marijuana in Canada back in October 2018. The stock collapsed in 2019, but investors are once again interested in the company, partly because voters in five states cast their ballots to legalize marijuana this month, adding $2.5 billion of market potential to a green wave sweeping across the U.S.

Can Canopy Growth reward marijuana investors and become a millionaire-maker stock through its U.S. expansion efforts? Let's find out. 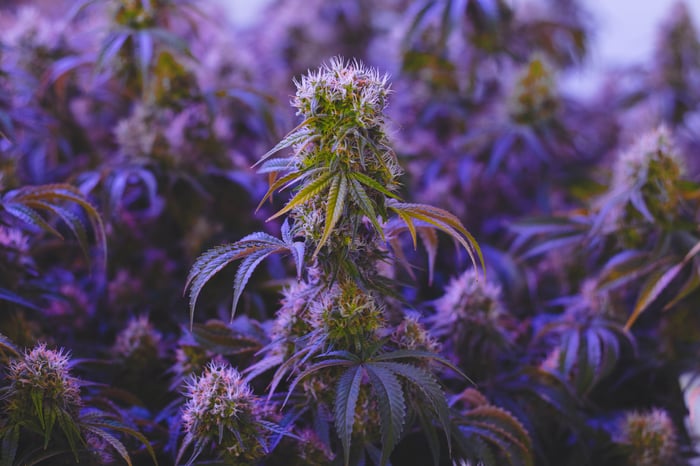 During its second quarter of 2021, which ended Sept. 30, Canopy's revenue increased by 77% year over year to $135.3 million Canadian. Its fastest-growing segment was recreational cannabis, which saw a stunning revenue increase of 178% over last year, to CA$60.9 million. In addition, the company has shipped more than 2 million cans of cannabidiol (CBD) drinks since launch, and it now holds more than half of the cannabis-infused beverage market in Canada.

Canopy's margins expanded along with sales. Compared with the second quarter of 2020, the company's gross margin increased by 14 percentage points to 19%. And while its free cash flow figure was a loss, that loss improved by 57%, to CA$190.4 million per quarter. Canopy Growth is well funded for its operations in the near future, with over CA$1.7 billion in cash and investments on its balance sheet.

What is the opportunity ahead?

Despite its success, Canopy Growth only owns (either entirely or through partnerships) 49 stores across Canada, controlling a 15.5% market share of a CA$2.2 billion market. In the U.S., however, the company can tackle a sector opportunity estimated to grow to $130 billion by 2024.

By 2021, Canopy Growth expects to expand direct-store delivery to all legal U.S. weed markets. The company is also planning to launch its brand of CBD gummies, vapes, beverages, oils, and softgels to thousands of retail stores across the U.S., and its products will be sold in more pharmacies, gas stations, convenience stores, and supermarkets throughout next year.

Unfortunately, similar to what happened around the time of marijuana legalization in Canada, Canopy Growth's U.S. expansion efforts are mostly priced in. Right now, the stock's price-to-sales valuation is a staggering 24, which is a lot considering the company has accumulated a net loss of over CA$4.463 billion since its inception.

Since Canopy has to make hefty capital expenditures (up to CA$245 million this year), it's unlikely that U.S. expansion will completely solve its profitability issue. As a result, I would recommend marijuana investors look at domestic U.S. pot companies, which are trading at much cheaper valuations despite having high revenue growth rates. I believe the opportunity to make a great deal of money on Canopy Growth stock is now long gone.