Stock for the fintech company StoneCo (NASDAQ:STNE) generally flies under the radar for many U.S. investors for one reason -- it operates only in Brazil. Although Warren Buffett's Berkshire Hathaway invested in the IPO in late 2018, it is not exactly a household name in North America.

However, since that IPO, StoneCo has clearly turned into an emerging fintech stock. Given its massive growth, StoneCo will likely drive solid investor returns, not only by changing the culture of finance in Brazil, but possibly in the rest of Latin America as well.

U.S. investors should pay attention to StoneCo because it fulfills a need that many U.S. investors tend to take for granted. Brazil, like most countries in Latin America, is primarily a cash-based society. According to a report by McKinsey, a large percentage of the population does not hold a bank account, credit card, or debit card. This presents a challenge in a retailing world moving heavily toward e-commerce platforms that cannot accept cash. 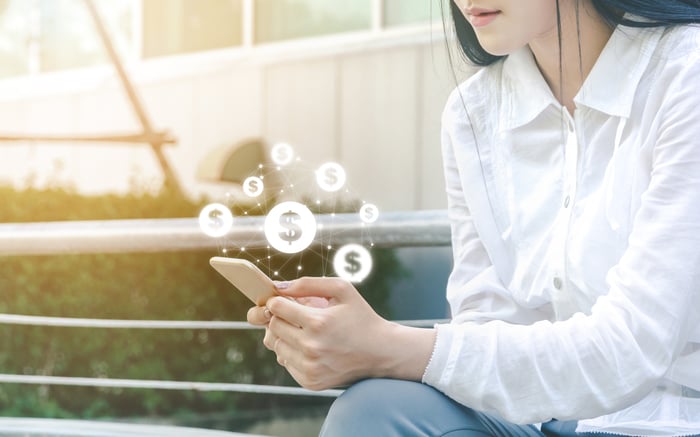 Although fintech companies such as PayPal or Visa may offer their services in Brazil, they operate from a developed world perspective, making them less well-equipped to deal with consumers outside of the traditional financial system.

This gives StoneCo a competitive advantage over those U.S.-based peers. It also means that StoneCo's most direct competitor is not a fintech company. Instead, it is the Argentina-based e-commerce giant MercadoLibre (NASDAQ:MELI). MercadoLibre recognized the challenge that e-commerce faced in a cash-based society. The company responded by developing MercadoPago to address this issue. It has since offered those payment services to companies across Latin America.

The financial case for StoneCo

Despite the competition, one can see why Buffett and his team took such an interest in StoneCo stock. Despite some slowing due to COVID-19, revenue increased by 39% from year-ago levels in the third quarter (ending Sept. 30), while total payment volume rose by 114% over the same period. This helped to take net income higher by 30% during the quarter. Adjusted free cash flow also surged by more than 600%.

Moreover, once COVID-19 passes, growth should accelerate as business activity returns to levels seen before the pandemic. In fiscal 2021, analysts forecast that earnings should increase by around 82%.

Such predictions sometimes prove optimistic. Nonetheless, the company has shown it can grow even under adverse market conditions. Hence, investors should expect the growth to continue even if the contagion lingers for longer than expected.

Additionally, investors may still have time to buy StoneCo stock, as the bull market has just begun. Although it launched its IPO in 2018, the stock traded in a range. This changed as it recovered from the March lows. Now, it has risen by around 50% year to date. Its current price of approximately $65 per share is close to StoneCo's all-time highs. 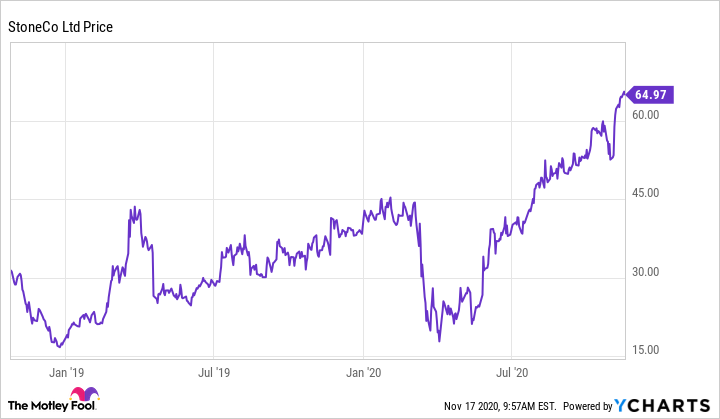 This has also taken the forward price-to-earnings (P/E) ratio to approximately 68. Still, at a market cap of $20 billion, it is a fraction of the size of MercadoLibre, PayPal, or Square. Thanks to the massive revenue and profit growth, the stock is also probably not as expensive as it might appear.

Where StoneCo goes from here

StoneCo's growth potential remains enormous. StoneCo has expressed a goal of becoming a one-stop-shop for fintech, much like Square in parts of the developed world.

As mentioned in the most recent earnings call, StoneCo intends to build three "highly synergistic" platforms. These consist of a financial platform for small and medium-sized businesses, a fintech-as-a-service platform, and a "full commerce platform" which will serve businesses of all sizes.

Customers should also remember that this growth has occurred in one country only. As mentioned before, other Latin American countries have a similar financial culture. Since Brazil accounts for about one-third of the population of Latin America, it is far from reaching its potential, even in its home region.

Indeed, StoneCo would face MercadoPago as a direct competitor. However, market research firm Valuates forecasts that the global fintech market will grow at a compound annual growth rate of 24% through 2025. Once more investors catch on to this value proposition, it may not stay under the radar for much longer.