Investors were treated to some welcome surprises when Hershey (NYSE:HSY) announced its latest operating results. The sweets and snack giant achieved a sharp rebound in the core U.S market during the fiscal third quarter and notched higher profit margins overall.

In a conference call with Wall Street analysts, CEO Michele Buck and her team projected further gains in both areas as Hershey looks to close out fiscal 2020. Let's look at a few highlights from that discussion. 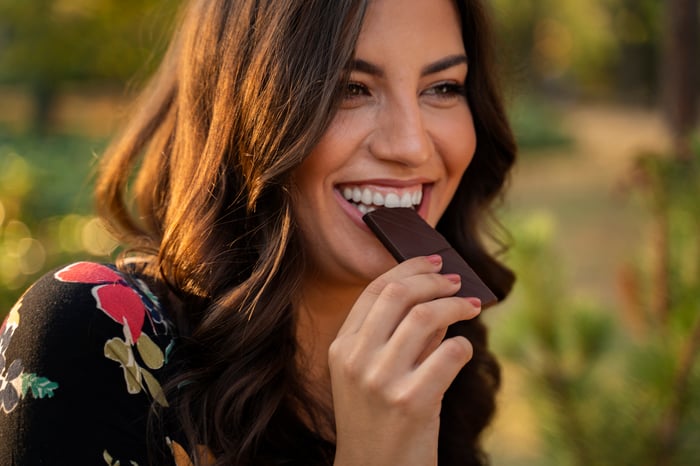 "We view pricing as an important part of our growth algorithm, but we are very focused and would like to drive to greater balance between price and volume," Buck said.

Hershey's organic sales growth jumped back into positive territory, just as management had predicted back in late July. Revenue rose 4% after falling in each of the last two quarters. Market share gains helped in the U.S. niche, where sales of baking products continued to soar while segments like mints and gums returned to growth.

Hershey got most of its boost from higher prices, though, as volume increased by less than 1%. Executives said they're aiming for a better balance between the volume and pricing metrics over the next few quarters. "You can count on seeing volume being a more important part of the algorithm next year," Buck predicted.

"We had pulled back on some spend in areas where we just thought given the pandemic, it didn't make sense," Buck said.

One major factor behind Hershey's surging profitability was reduced advertising and marketing expenses. That metric fell 4.6%, which helped operating profit jump 33%. Adjusted operating margin improved by 2.2 percentage points to 24.5% of sales, in fact.

Executives shouldn't expect to see more gains of that magnitude ahead, given that Hershey is restarting much of its advertising program as consumers return to more-normal shopping routines. Yet the company is still aiming for another year of overall margin increases in 2020.

Hershey didn't spend any cash on stock repurchases this past quarter and instead allowed its cash balances to balloon to over $1.2 billion, compared with $493 million at the start of 2020. Executives said investors shouldn't read anything into that posture except that their staying slightly more cautious given the volatile consumer spending environment.

Hershey isn't telegraphing another large acquisition on the level of the Pirate Brands franchises, even though management says it is looking at several potentially attractive smaller purchases that might occur over the next year or so.

In the meantime, Hershey is putting its growing cash resources to work through growth initiatives like advertising and improving the supply chain. If the company can pair those wins with higher profitability, then investors could see significant earnings growth in 2021 and beyond.

That positive outlook assumes that markets like the U.S. and large parts of Europe quickly emerge from their coronavirus-induced recessions, but it's grounded in data that's showing growing momentum for global business.