Market leaders sometimes rest on their laurels and miss the next wave of innovation in their industries. The idea was captured in Clayton Christensen's book, The Innovator's Dilemma, and was applied to many companies that stuck to profitable lines of business and addressable markets, even though the industry was adopting a technology that ultimately became cheaper and better.

Although the "cheaper" part of that scenario doesn't apply yet, gene editing could be getting ready to decimate the profits of Gilead Sciences (NASDAQ:GILD) and its most profitable drugs. A small private biotech has data showing that its use of CRISPR-Cas9 gene editing could potentially eliminate the need for patients -- and those at risk -- to take HIV drugs for the rest of their lives. If the clinical trials succeed, Gilead's shareholders could be in big trouble. In fact, they might be in big trouble anyway. 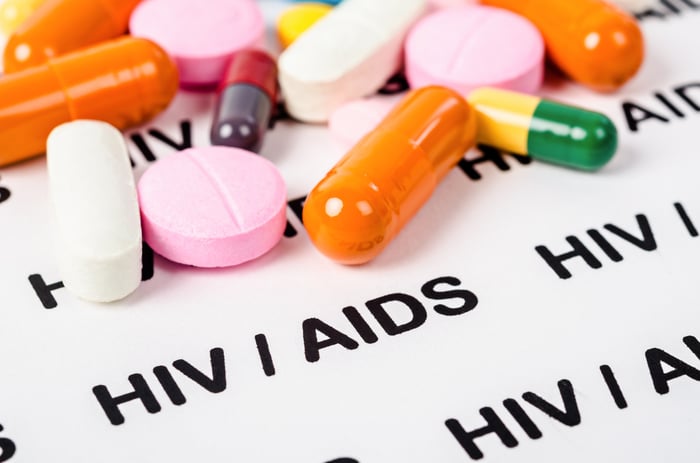 Gilead's Truvada was approved by the U.S. Food and Drug Administration (FDA) in 2004 to treat patients with HIV. Although the drug was the fourth approved daily antiviral drug for the company since 2000, Truvada is notable because it became the source of a 2012 FDA approval for preventing HIV among high-risk patients. The pre-exposure prophylaxis, or PrEP, was shown to be 97% effective at preventing the disease and became the standard for addressing the epidemic in the U.S. and other parts of the world.

In May 2019, the company announced it would donate 2.4 million bottles of the drug to the Centers for Disease Control (CDC) in an attempt to prevent further spread of the virus and end the HIV epidemic in the U.S. It was a noble gesture, as 40,000 people per year are diagnosed with the disease. In reality, Gilead can afford to offer free doses to hundreds of thousands of people because Truvada has been extremely lucrative for the company.

The drug costs between $1,600 and $2,000 per month, and that adds up. According to annual reports, Gilead had earned $38.6 billion from Truvada between 2004 and 2019. Like most markets, Gilead's excess profits have attracted competition. Truvada won't lose its patent protection until late 2021, but the company is already facing generic rivals from the likes of Teva Pharmaceuticals (NYSE:TEVA). The generic competitor may not be the company's biggest concern, though. Excision BioTherapeutics recently presented early results of its attempt to edit the genome of the simian immunodeficiency virus (SIV) -- the non-human primate version of HIV -- that gave scientists hope that a cure for HIV will one day be an edited genome away.

Excision licensed its gene-editing technology from Temple University, using CRISPR-Cas9 to cut out pieces of the HIV genome. HIV, like other viruses, can mutate around a single cut, but making multiple cuts prevents the virus from activating. This is different from antiretroviral drugs like Gilead's, which can hold back the virus and render it undetectable in the blood while it hides out in reservoirs such as special immune cells, only to emerge weeks after the drugs are no longer taken. With Excise's approach, a single infusion caused the CRISPR-edited version of the genome to reach every tissue in the body where HIV resides. In March, management said it was aiming to start a clinical trial for the treatment this year.

Excision BioTherapeutics also looks like it is preparing to go public. The company recently created a business advisory board and named an interim Chief Business Officer who was formerly head of Investor Relations at Regeneron (NASDAQ:REGN). A public company, Sangamo Therapeutics (NASDAQ:SGMO), is also targeting HIV reservoirs with zinc finger nuclease editing, a different approach to changing the genome than CRISPR. Sangamo has an ongoing phase 1/2 trial with 20 patients. All of this attention on curing HIV with a gene-based approach cannot be good for Gilead. Despite the longer-term threat of gene editing, it may be the government that takes the biggest chunk out of profitability in the short term.

Despite Gilead's praise in the spring for its donation of Truvada, the U.S. government is now suing the company over its profits from patents on the HIV medication. In a rare move, the government is claiming taxpayers, not the company, funded much of the research that led to the drug. By its evaluation, Gilead did little to advance the therapies other than donate doses for experiments. How the suit plays out now is anyone's guess, but it's interesting that politicians on both sides of the aisle were thrilled with the aggressive action. So, Gilead's problems may not disappear along with the current resident of the White House.

What could this mean for Gilead?

With Uncle Sam, generics, and gene-editing start-ups hunting its profits, it's no wonder Gilead's stock finds itself at prices it first reached seven years ago. The government's action may be intended to earn leverage on pricing negotiations, and gene editing is years away from offering an approved replacement, but the long-term outlook for Gilead is not great. Even though the company has made big and small acquisitions in cell therapy, they haven't paid off. Gilead has twice been forced to write down the value of Kite Pharma, which it purchased for $12 billion in 2017.

Gilead is looking more and more like the proverbial "cigar butt" that Warren Buffett joked about investing in early in his career -- the kind of company that is on its way out, but might have a few good puffs left in it before being extinguished.