Audio streaming giant Spotify (NYSE:SPOT), has drawn lots of criticism from investors because its expenses eat away at so much of its revenue. Since the majority of its cost of revenues is paid out in royalties to the major music labels, Spotify touts a measly 25% gross margins. However, the platform is changing, and so is Spotify's leverage in negotiations with the labels. Early on, Spotify needed users, and the labels owned the music. Now, the labels need distribution -- and Spotify owns the ears.

How much does it pay the labels?

While the specific contract terms are complicated and unspecified, record labels, music publishers, and the music rights owners receive a royalty from Spotify for letting Spotify stream their content. It has been estimated that 52% of the revenue generated from each stream gets distributed to the specific rights holders.

This favorable payout ratio likely reflects how much Spotify needed the labels' content in its early days. Without the music, Spotify would have had no way of attracting users. But now, from the outside looking in, Spotify's dependence on the labels' content is shrinking for two reasons: diversified revenue streams and continued user growth. 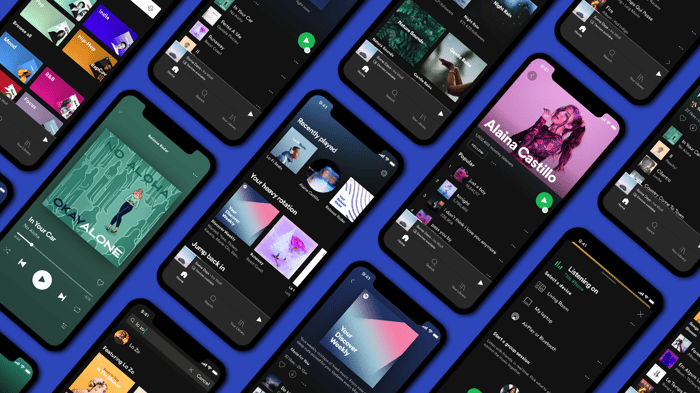 Subscription business models can make it difficult to determine why customers pay for a product. What does the customer actually want? Most subscription businesses find that answer in their users' data -- and for Spotify, that user data has been shifting away from music.

In Spotify's most recent quarter, 70.4 million users listened to podcasts -- more than doubling the 34.5 million podcast listeners from last year. As investors, we can reasonably assume that Spotify's recent investments in the podcast space are partially responsible for this 103% increase in podcast engagement.

Much like Netflix, Spotify started by distributing others' content, but as Spotify has grown, it has released its own original and exclusive podcasts. According to the company's most recent shareholder letter, The Michelle Obama Podcast became its top globla podcast in July and August -- a sign that Spotify originals are catching on with users. The Joe Rogan Experience also goes exclusive on Spotify at the end of this year, and judging by Rogan's 2019 figures of more than 190 million monthly downloads, which has likely grown since, he should bring a large audience with him.

Beyond exclusive content, Spotify is becoming a major podcast ad exchange as well -- this time, through acquisition. On Nov. 10, Spotify announced its acquisition of Megaphone, which distributes podcasts onto all the major platforms and connects podcasters with advertisers, who can insert their own ads into podcasts to better target their marketing. Podcasters have to pay to use Megaphone, creating recurring revenue for Spotify -- and recurring podcast revenue should help Spotify rely less on costly deals with major music labels to further expand its overall revenue.

Thanks to these investments in the podcasting space, and users' adoption of podcasts as a whole, Spotify's need for the labels' content looks like it will decrease over time. In turn, its growing overall audience should give Spotify greater leverage against the labels going into future negotiations, which should help expand its profit margins.

As Spotify continues to grow, it's sensible for an artist to stay on the platform, and irresponsible to leave. Most artists get the majority of their income from tours or live performances. To get the most out of those concerts, artists want their music available to as many fans as possible. More exposure to listeners means more potential fans who'll buy tickets to live events. Avoiding the more than 300 million possible fans on Spotify's platform would make income for the artists a little harder to come by.

Even though long-term margin expansion seems logical for Spotify, it hasn't happened yet. If Spotify is going to keep more of its revenue to itself, it'll need a massive user base that listens to more than just music. To see whether it can reach this goal, keep an eye on nominal monthly active user growth, and the percentage of active Spotify users listening to podcasts. While these metrics aren't perfect, they should give investors at least a few hints about true value of Spotify's platform.