The Marlin Firearms brand -- a famous line of lever-action rifles, bolt-action hunting rifles, and .22 rimfire semi-automatic long guns -- became the property of Sturm, Ruger & Company (NYSE:RGR) as the final step in an acquisition that began earlier this year. Marlin Firearms was previously owned by Remington Outdoor Company, which went bankrupt and was fully liquidated in September 2020.

Marlin's lever-action rifles became popular with the rising use of scopes in the last two decades of the 20th century, with their side ejection making scope mounting easier. The rifles' sturdiness also allowed chambering in heavier calibers than many competing lever-action long guns. When the company received bankruptcy court approval for the acquisition on Sept. 30, Ruger CEO Chris Killoy noted that Marlin's brand "aligns perfectly with ours," and that "the Marlin product portfolio will help us widen our already diverse product offerings." 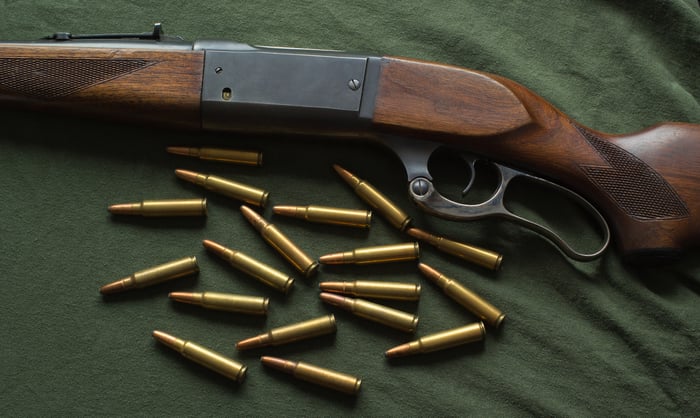 Marlin's quality suffered after its initial 2010 acquisition by Remington Outdoor; much original manufacturing information was lost when Remington declined to hire Marlin's experienced personnel for its facilities. Product manager John Fink noted Remington's workers "had never built lever-action rifles before, so there was a learning curve," as reported by Shot Business. Thousands of what many firearm enthusiasts consider to be subpar rifles were made between 2010 and 2014, damaging Marlin's reputation.

In Ruger's latest press release, CEO Killoy says the company looks "forward to reintroducing Marlin rifles in the latter half of 2021." If Ruger can produce quality Marlin lever-action rifles -- a task presumably made easier by the painstaking technical drawing, research, and development Remington carried out a decade ago -- it may add an additional revenue source to its current fast-paced sales.