A Dividend Aristocrat is a company that has increased its dividend every year for at least 25 years. As of the last count, there are only 66 companies that have achieved this exalted status. For investors, it signifies a company is consistent, stable, and one you can count on to deliver ever-increasing dividends. Ten companies on the list have the additional title of Dividend Kings, as they have increased their dividend payouts for at least 50 straight years.

Consistency is important to investors who count on dividend income, perhaps even more so during this period of market volatility. You will find that consistency in the Dividend Aristocrats, but there are other great dividend stocks that donʻt get the same attention because they have not yet reached that lofty plateau.

One such company is Evercore (NYSE:EVR), an investment bank that has not only produced great dividends but has generated strong returns through the pandemic. It is a stock that is well on its way to Dividend Aristocrat status. 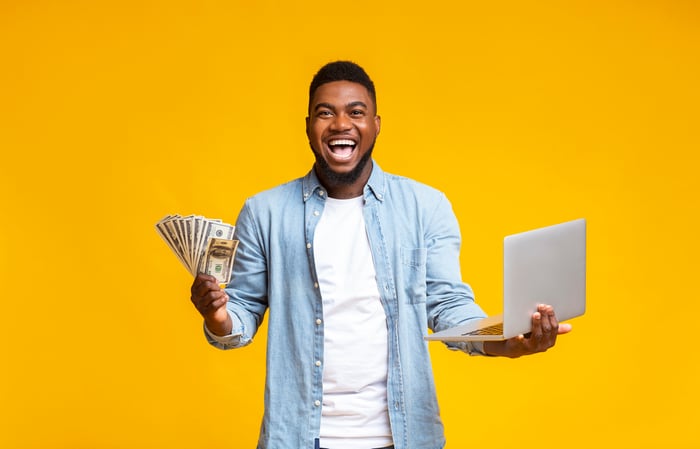 11 years of dividend increases and counting

Evercore has had 11 straight years of annual dividend increases, putting it close to halfway toward becoming a Dividend Aristocrat. In the third quarter, Evercore increased its dividend 5% to $0.61 per share, up from $0.58 last quarter. That adds up to an annual payout of $2.35 per share, which, if you owned 200 shares, would net you $470 in yearly income. Over the last five years, the dividend has increased by 117%.

Evercore is a New York City-based investment banking firm that has two primary sources of revenue: advisory fees for mergers and acquisitions, and underwriting fees to help companies raise capital. Advisory fee revenue was down 16% to $271 million due to an overall slowdown of mergers and acquisitions activity through the pandemic, but underwriting fees were up to a record $66 million, an increase of 278% year over year.

Underwriting has been up in general for investment banks as companies need to raise capital during the pandemic and recession. But Evercore stands out among its peers for its track record, named the top independent research franchise by Institutional Investor for seven straight years, including this year. And it ranked third among all firms. That customer behavior to shift out of risky assets during financial downturns, sometimes called a flight to quality, has been a major boost for Evercore, as clients seek a trusted source during these difficult times.

"In a year marked by a global pandemic and an economic downturn, we are seeing increased demand for both our macro and fundamental research by not only our institutional investor clients, but also our corporate clients," John Weinberg, Evercore's co-chairman and co-CEO, said.

Evercore is not only a good buy for its dividend. The company, trading at just 15 times earnings, should see solid earnings over the next few years as pent up M&A activity ramps up in 2021 and beyond. Wall Street analysts are bullish on the stock as Morgan Stanley, JPM Securities (a division of JPMorgan Chase), and UBS have all recently confirmed a buy rating for Evercore. Both Morgan Stanley and JPM raised the price target to $102 a share, up from its current $87, citing a continued recovery in the capital markets, according to financial news site The Fly.

It may be a good time to buy Evercore at this valuation, given its strong potential for growth in the coming years as we move out of the recession into a period of more M&A activity. Before you know it, they will be calling it a Dividend Aristocrat.