The craft beer industry is being crushed by the coronavirus pandemic. Already ailing from changing consumer preferences, small breweries are at a make-or-break point that could see the character of the entire industry altered.

As winter approaches and states impose new lockdown orders, the local brewery scene that spawned a revolution in adult beverages may be no more. 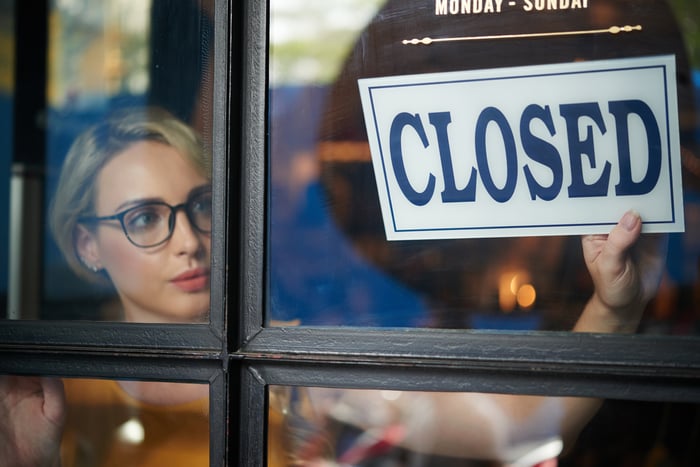 Although the COVID-19 outbreak won't bankrupt the major beer producers, even Anheuser-Busch InBev (NYSE:BUD) and Molson Coors (NYSE:TAP) are feeling the impact of lower sales. With bars and restaurants first closed, and now only allowed to operate at significantly reduced capacities, the craft-brewing industry is on the brink with thousands of breweries potentially about to go out of business.

Many craft brewers only survived the first round of lockdowns because their taprooms were able to utilize outdoor seating. Yet just as restaurants are facing a similar crisis, brewers will soon find that option closed off as winter sets in. States including New Mexico and Oregon have banned outdoor dining now, and L.A. County in California just joined them.

With curfews also being imposed because compliance with social distancing protocols may diminish as the night wears on, craft brewers are growing increasingly pessimistic about their ability to survive.

Losing the will to live

The craft beer industry's Brewers Association surveyed its members and found that where over 81% were very confident about their ability to still be in business by the end of 2020, but that assurance plunged to just under 54% when they were asked whether they would be around a year from now.

Overall, 22%, or more than one in five of all craft brewers, don't think they'll still be operating by the end of 2021. With around 8,300 breweries currently in operation, that means we could see the industry contract to pre-2017 levels.

While the industry has long debated if there were too many craft breweries flooding the market with beer, the trend toward local had mitigated some of the effects.

It's why Boston Beer (NYSE:SAM) still struggles to sell its flagship Samuel Adams beer. It has far outgrown its craft beer roots, yet is also not big enough to compete at the same level as the megabrewers.

Nowadays, Boston Beer is primarily a hard seltzer producer and its Truly brand is the country's second-largest, with about a 25% share. Yet as ever greater numbers of brewers and beverage makers redirect their production efforts away from beer and toward hard seltzer, it might not be long before we see the same outcome craft beer is facing.

The Brewers Association wants to help small brewers survive the pandemic by promoting Small Brewery Sunday on Nov. 29, the Sunday after Thanksgiving. Launched last year as a means of supporting local brewpubs in a market where drinkers were turning away from beer, this year's promotion is literally to help them survive.

The trade group notes two-thirds of the U.S. population lives within 10 miles of a local brewery and the industry contributes some $83 billion to the economy. But even after bouncing back from a disastrous second quarter brought on by the pandemic that saw sales plunge 43% from the year-ago figures, third-quarter sales remain 22% below last year's levels.

Bob Pease, the association's president and CEO, said the situation is dire. "It's crucial for beer lovers to support their local brewery, taproom, or brewpub throughout these next few critical months and beyond," he said in a statement.

Even before the pandemic the number of breweries closing their doors had increased over two and a half times in the past five years. That's going to accelerate now and it's quite possible the fallout from a second coronavirus shutdown will be worse than imagined.

The craft beer industry that had once been vibrant and growing is heading into a period of significant contraction, one where maybe even the primary beverage produced is not even beer anymore.

While COVID-19 can't be blamed for all the problems the industry faces, it exposed the fault lines. Craft beer might never be the same.