Jumia Technologies (NYSE:JMIA) is an internet retailer that is focused on several countries in Africa, including Nigeria, Egypt, and South Africa. After its April 2019 initial public offering at $14.50 a share, the bulls immediately drove its price up to $25 to close its first day of trading, and $40 not long after that.

The market was excited about Jumia in part based on the fantastic results that other internet retailers like Amazon (NASDAQ:AMZN), Sea Limited (NYSE:SE), and MercadoLibre (NASDAQ:MELI) have achieved. 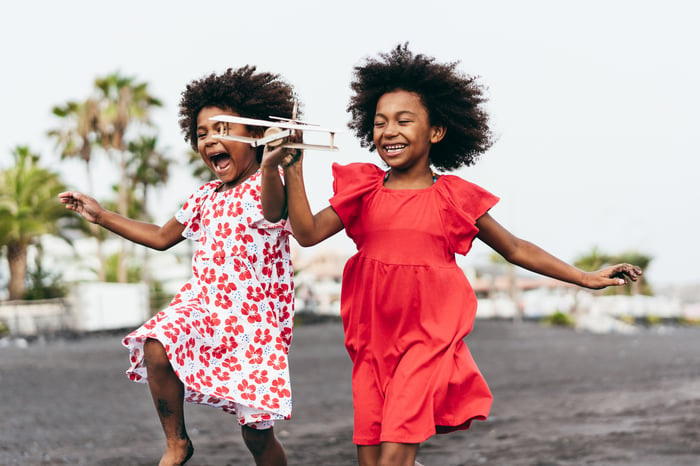 The euphoria was short-lived. In May 2019, short-seller Citron Research accused the company of being a fraud. The stock dropped almost 19% on the news.

According to Citron, Jumia overstated its revenue numbers by neglecting to inform investors how high a percentage of its sales had to be refunded because items were returned, canceled, or not delivered. Several months later, Bloomberg reported that 40% of Jumia's orders resulted in cancellations or returns.

The stock lost another 29% in September. By the end of the year, Jumia's share price was down to $6.

The story in 2020 has been radically different. If you bought Jumia shares at the start of January, your investment is up by about 351%. Bottom-fishers have made out like bandits. 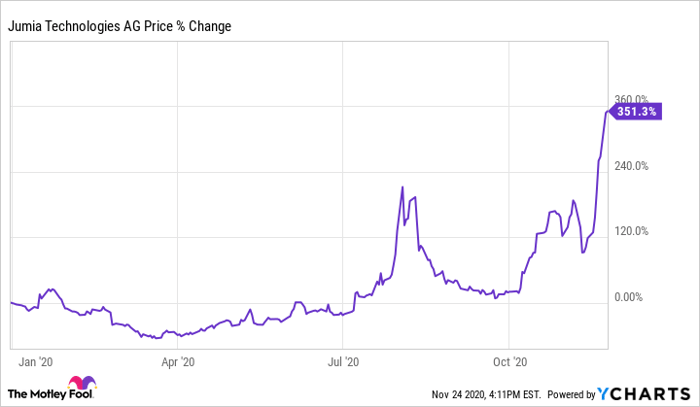 Why is Jumia's stock on a rampage this year?

One possibility is that hedge funds and other traders are buying internet retailers across the board. After all, 2020 is the year of COVID-19. Internet companies in general have soared in this environment. Virtual retailers have seen sales spike dramatically.

Yet in Jumia's case, this explanation doesn't make any sense. Regardless of how its broad sector is doing, the African e-tailer has gotten no sales tailwind from this lockdown environment. In fact, its revenues are actually worse than they were a year ago.

Are some traders manipulating the stock price?

I would venture to guess that market traders have been squeezing the shorts. Jumia has a high short interest. About 21% of the float is sold short.

On Oct. 9, Jumia's stock surged 12% when Citron tweeted "NO WAY" after being asked if the company was going to short it in the wake of its huge run-up. This is the same Citron Research that declared Jumia was an "obvious fraud" last year. Now, Citron is a buyer.

So, yes, traders and short-sellers have been manipulating Jumia's stock and trying to bag some short-term profits. This sort of thing is nothing new. A couple of decades ago, lots of financial experts warned us that Amazon was doomed. In 1999, Barron's magazine put up a headline: "Amazon.bomb." At the time, Amazon's market cap was $19 billion.

If you ignored the pessimism in that Barron's article and bought shares of Amazon despite their high valuation, you would have made 79 times your investment in 21 years. (Of course, you would also have had to hang on through some really scary drops, including at least one 90% fall).

While short-term traders are causing extreme stock fluctuations in Jumia, Foolish investors try to look past such shenanigans and think ahead five years, 10 years, or even more. Will internet commerce be incredibly valuable in Africa? Yes, absolutely.

Will Jumia be the company to dominate that market? That's the billion-dollar question.

Following Sea's lead is not a bad idea.

One notable thing Jumia is doing is copying the highly successful strategies of Sea Limited, an internet retailer that is seeing spectacular revenue growth in Southeast Asia. Instead of building out warehouses and carrying large amounts of inventory, Sea runs Shopee, a virtual marketplace that third-party sellers use to connect with customers. While that business model has its own set of difficulties (you have to be mindful of fraud from those third parties), this sort of collaborative model allows much faster growth. And, of course, it saves a company from having a lot of money tied up in inventory.

Jumia's bad numbers in part are a reflection of a mid-course shift in its business model. It's abandoning the Amazon method of building out expensive warehouses and storing large quantities of inventory. In its most recent quarter, the revenues it booked from selling products directly declined sharply. But that was a direct and expected result of the company's decision to change to a business model more like Sea's.

In addition to its shift to third-party sales, the company started up Jumia Pay as an internet payments platform (a copy of SeaMoney), and it introduced Jumia Games in the third quarter. This, too, seems to be an attempt to mimic the success of Sea Limited.

The founder of Sea Limited, Forest Li, is a video games nerd. He built his video game company Garena first. After it was wildly successful, he created Shopee for internet commerce and Sea Pay for virtual payments. Sea's wild international hit Free Fire was created in-house, and was obviously a result of passionate people doing what they know best.

It's exceedingly unlikely that Jumia will create an amazing new video game that will sweep across Africa. The company has no gaming experience. That's not what it does. So it's collaborating with another company, Mondia, that is supplying the games.

While this business model has clearly been a winner for Sea, investors should probably wait and see if Jumia can successfully replicate it in another part of the world. Keep an open mind and wait for dynamic revenue growth before you invest here.

Why Is Everybody Talking About Jumia Stock? @themotleyfool #stocks $JMIA $AMZN $MELI $SE Next Article
Current