Datadog (NASDAQ:DDOG) stock broke away from its leash almost as soon as it launched its IPO a little more than one year ago. It did not stop running higher until it peaked above $118 per share in mid-October.

However, with questions beginning to emerge about where the stock can go next, the price seems to be chasing its tail of late and going nowhere. Investors are beginning to reassess and need to decide whether Datadog can find more room to run or has this dog had its day and is ready for the doghouse.

The problem with Datadog stock

Putting the puns aside for the moment, Datadog offers operational analysis of a company through what it calls "monitoring as a service." It compiles data from all aspects of cloud applications to make the entire stack of a tech company's operations observable from one point.

At first glance, it may not look like an appealing tech stock. For one, it is far from the only cloud monitoring company. Companies can turn to the likes of New Relic, Splunk, and Sumo Logic for similar functionality. Datadog must also compete with established tech giants such as Cisco Systems and International Business Machines.

Moreover, with a forward P/E ratio that has risen above 430, Datadog stock sells for a considerable premium. The fact that the stock has risen by more than 140% this year partially explains the multiple. 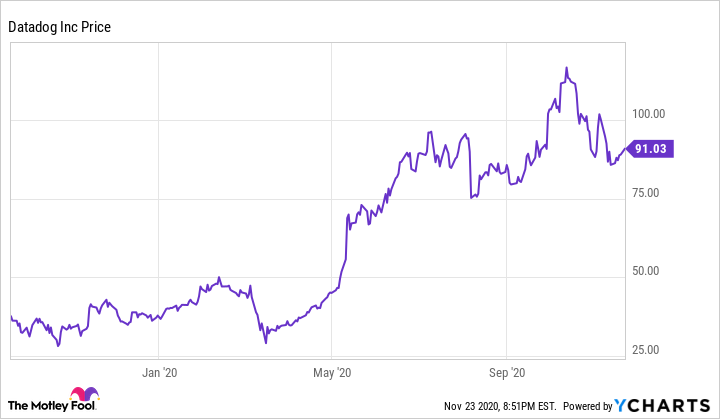 Much of this growth came as the pandemic led to a switch in work from the office to the home. Such a need accelerated the demand for cloud products, and by extension, the need to monitor such activity.

Datadog stock sold off in October as a pullback began in the broader markets. However, share prices plunged after its most recent earnings announcement, likely on the perception that the company has elevated share prices.

Despite the investor reaction, Datadog still delivered a stellar third-quarter earnings report in early November. In this most recent quarter (which ended Sept. 30), revenue surged by 61% from the same quarter last year.

Additionally, the company experienced a considerable increase in customers spending at least $100,000. This number rose to 1,107, up from 727 in the year-ago quarter.

This progress helped Datadog make a profit for the quarter. The company earned a non-GAAP (adjusted) profit of $0.05 per share. It also generated free cash flow of almost $29 million during the same period. 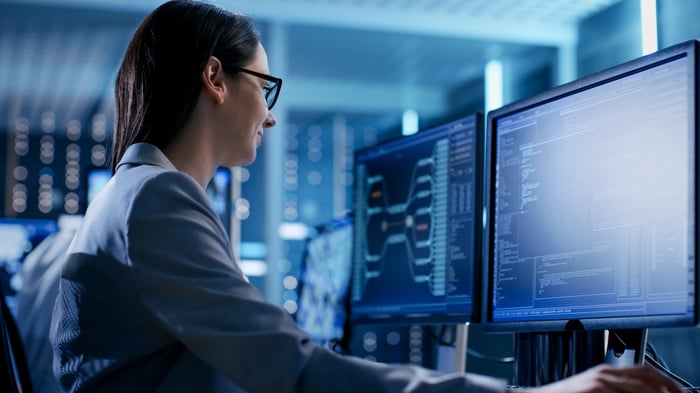 Analysts also expect the growth party to continue. For now, they forecast 63% revenue growth this year and 36% in 2021.

Currently, Datadog supports a market cap of around $28 billion. Still, despite its relatively small size, it has built a discernable competitive advantage. The company has partnered with Amazon to help its Amazon Web Services and Alphabet's Google Cloud Services to offer added data services to the companies' cloud customers.

Additionally, an alliance with Microsoft goes one step further. Thanks to a recent agreement, Microsoft will make Datadog available from Azure's portal, and customers can even purchase Datadog by drawing from committed spend on Azure.

Datadog looks poised to succeed. Not only does revenue growth remain massive, but it has managed to placate mega-cap competitors by building partnerships and avoiding those companies creating competing services.

Nonetheless, at some point, valuation matters. While Datadog continues to log impressive growth numbers, it does not appear to generate enough growth to justify a forward P/E ratio that has reached the current lofty levels. Investors seem to sense this, as they sold off the stock amid Datadog's stellar earnings report.

Datadog may well be a lead dog in the future of cloud monitoring. It also appears likely to trade at higher levels five years from now. However, at this stage, Datadog stock has probably gotten a bit ahead of it tail. Hence, potential investors might serve themselves better by offering their treats to other investments for the moment.