Please ensure Javascript is enabled for purposes of website accessibility
Free Article Join Over 1 Million Premium Members And Get More In-Depth Stock Guidance and Research
By Royston Yang - Dec 2, 2020 at 11:01AM

Investors can look forward to better numbers as the coffee chain adapts to customers' new habits.

Shares of Starbucks ( SBUX -0.89% ) rose 12.7% in November, according to data provided by S&P Global Market Intelligence.

The stock is up nearly 10% year to date and has soared 74% above the low recorded in the middle of March. 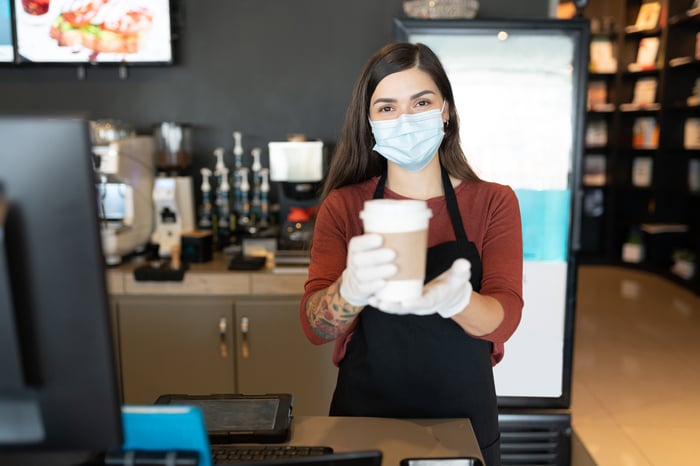 Starbucks released a better-than-expected set of fiscal 2020 fourth-quarter earnings at the end of October. CEO Kevin Johnson said in the company's earnings briefing that the company ended September with a comparable store sales decline of just 4%, which was a significant improvement from the 65% decline experienced at the peak of the pandemic back in April.

As customers began to work and study from home and change their buying behavior, Starbucks adapted its business model to cater to these changes by introducing more drive-thru and curbside pickups. Curbside pickup has already been rolled out to 800 U.S. company-operated locations and the company is on track to convert nearly 2,000 stores to this format by the end of the fiscal year 2021.

Starbucks continued to emphasize digital engagement with the revamp of its Starbucks Rewards loyalty program. Its 90-day active member count has increased to 19.3 million, up 10% year over year, driven by the launch of the new "Stars for Everyone" initiative that made it much easier for customers to gain loyalty points to redeem for free beverages. The company also announced its tenth consecutive annual dividend increase from $1.64 to $1.80, making the business a reliable dividend stock despite the crisis.

Starbucks has continued to grow through its Global Coffee Alliance with food and beverage giant Nestle. Through this alliance, the company entered nine new markets during the quarter and expanded its reach by delivering its coffee to 62 different markets. Just last month, the company announced plans to open its very first outlet in Vientiane, Laos, continuing its global expansion in Asia.

It's also doing its part to help in the fight against COVID-19 by bringing back its free coffee giveaway for first responders and healthcare workers as cases continue to surge in the United States. Starbucks is set to host its biennial Investor Day on Dec. 9, which will feature a virtual session with presentations and a question-and-answer session with senior management. Investors can tune in to learn about how the business continues to find ways to innovate and grow.