However, both companies have emerged as competitors in recent years, most notably in the cloud. Both have challenged the dominance of Amazon's Amazon Web Services (AWS), which remains the largest cloud infrastructure company.

Nonetheless, the question of whether Alphabet or Microsoft will drive higher returns for investors comes down to more than just the cloud. Let's look at both tech stocks to see which will be the better buy going forward.

The two mega-caps and their businesses

Both Alphabet and Microsoft appear positioned to grow despite their already massive operations. MarketsandMarkets Research predicts that the cloud infrastructure market will grow at a compound annual growth rate (CAGR) of almost 18% through 2025. Also, Canalys estimates that Microsoft Azure controls about 19% of the cloud infrastructure market, compared with 7% for Google Cloud.

However, investors should remember that the cloud has now become Microsoft's primary growth driver. This happened after it made a comeback amid a declining PC business. 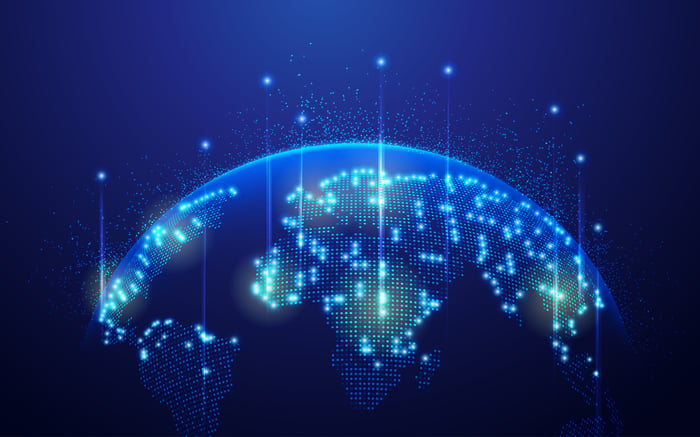 This arrangement benefited Microsoft more during the COVID-19 pandemic as lockdowns and social distancing brought more workloads to the cloud. Cloud growth bolstered both its intelligent cloud division and productivity and business processes divisions during this time.

Conversely, Google's ad business suffered due to lower economic activity at the height of the pandemic. As a result, its second-quarter earnings report led to its first year-over-year revenue decline since becoming a public company.

Given the recovery in the ad business and the potential for other businesses to drive growth, investors should not count Alphabet out.

Both companies also derive some revenue from online gaming. However, the more exciting battle royale game may be the fight to outdo one another in the financial realm.

Admittedly, both companies produce excellent numbers in this area. This is especially notable since the sheer size of mega-caps makes high-percentage growth more difficult.

Investors appear to have rewarded them accordingly. Microsoft holds a slight edge in stock price gains year to date. Still, at a 2020 year-to-date return of over 30%, both companies have served their investors well. 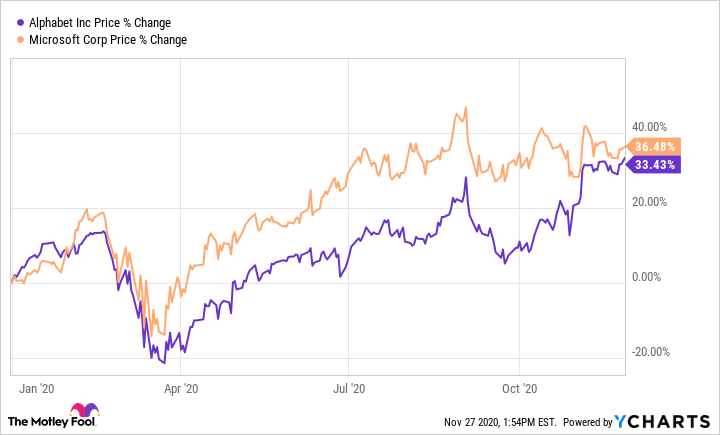 Amid the pandemic, the recent revenue and earnings figures have admittedly favored Microsoft. However, in the most recent quarter, Alphabet's diluted earnings per share (EPS) surged by 62% from the same quarter last year. Microsoft's diluted EPS increased by 32% over the same period.

Over the long run, investors will probably earn significant returns by investing in either company. Given their presence in high-growth tech businesses, both of these stocks should move higher over time.

However, if one must choose, investors should gravitate toward Alphabet. For one, Alphabet holds the edge when comparing legacy businesses. Online ads will likely drive massive growth for the foreseeable future. Although PCs will probably continue to earn revenue for Microsoft, the demand for operating systems is not likely to grow quickly.

Moreover, Alphabet has positioned itself for multiple sources of growth. Google is ramping up its cloud presence while search and ads generally remain strong. Furthermore, it holds stakes in numerous businesses across numerous tech-related niches.

Conversely, while the cloud should hold Microsoft in good stead, it will probably serve as its primary growth driver for years to come.

No matter which company delivers higher returns, both will likely remain top players in tech for a long time to come. Expect this battle royale to continue.