These aren't the types of financial metrics you see most companies post.

Sometimes, it feels like companies can do no wrong. That's what many CrowdStrike ( CRWD -5.88% ) watchers are feeling right now. The company just reported fiscal 2021 third-quarter earnings that astounded Wall Street and sent the stock up over 15% at the opening bell on Thursday. All told, shares have tripled over the past year.

Clearly, this is one of the market's great growth stocks right now. But while investors are focused on the headline numbers, there are two numbers that long-term investors (myself included) should be paying the most attention to. 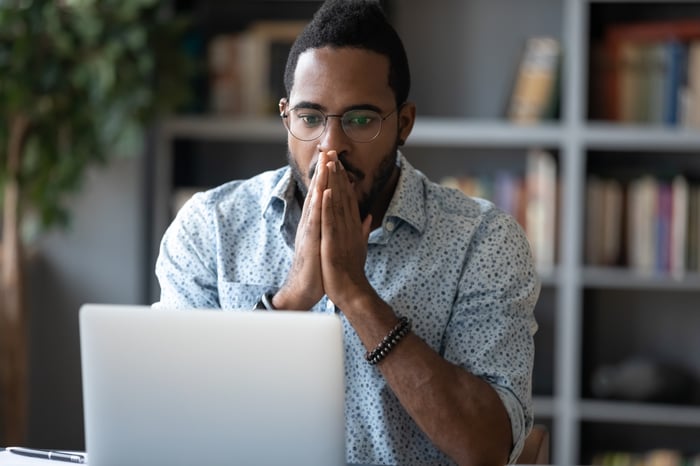 Before we get started on why this cloud-based cybersecurity company did so well, let's peek at the headline numbers everyone is focused on. As a software-as-a-service (SaaS) company, here are some of the most common metrics.

By any subjective measure, these are impressive results. The fact that CrowdStrike is generating so much free cash flow also means that it has graduated, as a SaaS company, to the point where losing money is no longer a primary concern.

Additionally, CrowdStrike announced that its net retention rate was 124%. What that means is that -- after filtering out the customers that joined CrowdStrike in the past year and including customers that might have left -- the average CrowdStrike user was paying 24% more this year than last year.

We'll dive more into how that's even possible below.

The two most important parts of a winning long-term investment

Over the years, I've zeroed in on two things as the most important by far to analyze before making an investment decision: a company's optionality and its moat. Let's define those:

This brings us to the first number-- focusing on optionality -- that I consider so important: the number of CrowdStrike modules customers have to choose from. When the company went public last year, there were 10. Here's how that was visualized in the prospectus.

While they are hard to read in this illustration, each of those 10 boxes at the top (things like Device Control and Threat Intel) were a product that CrowdStrike offered. But now, there are far more services available: 17 total, with some additions like Falcon Forensics and Zero Trust Assessment, helped in part via acquisitions.

What does this mean for investors? Simply that there's enormous upside potential. We don't even need to know where it might come from. CrowdStrike is learning as it goes along, and will develop tools to help stop breaches.

Of course, none of this matters if customers aren't adopting multiple modules (and they are). And that leads us to the second important number. By combining data the company reports every quarter, we can see that the number of customers choosing at least four modules (out of those 17) has more than doubled since the same time last year. The same can be said for those using at least five modules! 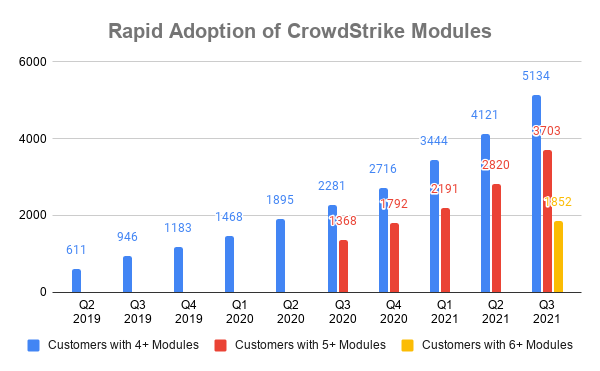 Data source: SEC filings. The total number of customers for each quarter is a rough approximation, arrived at by multiplying total customers by the percentage that have adopted a certain number of baseline modules.

Why does this matter? Because it adds dual moats around CrowdStrike's business.

By understanding how these two dynamics -- optionality and a moat -- function at CrowdStrike, it shouldn't be surprising to see a stock that's tripled in 12 months.

Does that make CrowdStrike a buy for your portfolio? Only you can make that decision. But I will offer this: If CrowdStrike weren't already 6% of my real-life holdings, I'd have no problem adding shares after considering all the company just reported.