Shares of Nano-X Imaging (NASDAQ:NNOX) were skyrocketing last month though there was little news on the medical imaging company. Instead, anticipation of its presentation at the Radiology Society of North America on Dec. 3 seemed to drive the stock higher. It surged at the end of the month, finishing up 122%, according to data from S&P Global Market Intelligence.

Hopes for a well-received debut at the conference seemed to fuel that spike. 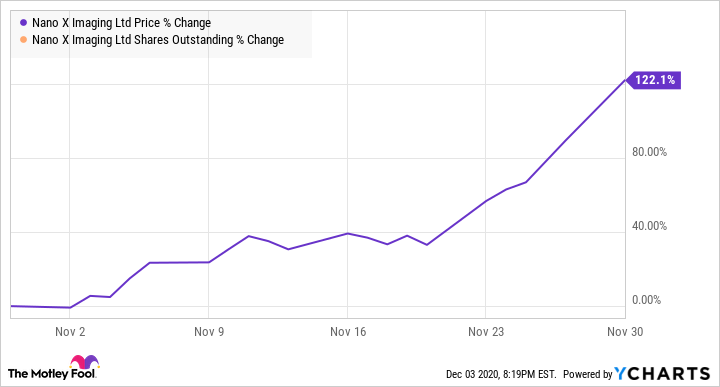 Nano-X did report earnings in November; however, with no revenue yet as operations only started last year, the focus was not on the numbers. In the report, management said it had signed a number of distribution agreements for its ARC digital X-ray device, including most recently with SPI Medical for 630 devices in Mexico and Guatemala. That gives it contracts with nine service providers to deploy 5,150 units across 13 countries. The company also said it was well capitalized with $240 million in cash and cash equivalents, and no debt.

Investors mostly shrugged off the report, and the stock began to rally on Nov. 23, jumping 18% though there was no news on the stock. Later that week, the company announced the time of its presentation at the RSNA conference, which drove the surge through the end of the month as bulls swarmed in to the healthcare stock. Nano-X also has attracted attention from well-known short-sellers like Citron Research's Andrew Left and Muddy Waters' Carson Block, making it a hotly debated stock.

On its presentation day, the stock swung back and forth but finished the day down 4%. The ARC prototype got positive reviews from most investors on Twitter, but it didn't seem to be enough to convince the market to push the stock up further. Nano-X has yet to get FDA approval for its device, which may be the next key catalyst for its stock.

Nano-X promises revolutionary technology by disrupting conventional X-rays, but with no business yet to speak of and FDA approval of its imaging system still in question, the stock remains a high-risk play. Expect its volatility to continue.