The newly public company has its share of both bulls and bears.

Shares of Palantir Technologies ( PLTR -0.37% ) climbed nearly 7% on Thursday, as the data analytics company's stock price recovered from the drubbing it took earlier in the week.

Palantir plunged on Wednesday after Morgan Stanley analyst Keith Weiss cut his rating on its stock from equal weight to underweight and assigned a $17 price forecast on its shares.

Weiss argued that with Palantir's stock up sharply from its public offering price of $7.25 in September, the risk-to-reward trade-off for investors was "decidedly negative." With its shares trading at more than 30 times his revenue estimates for 2022, Weiss questioned whether Palantir's growth prospects justified such a lofty valuation. 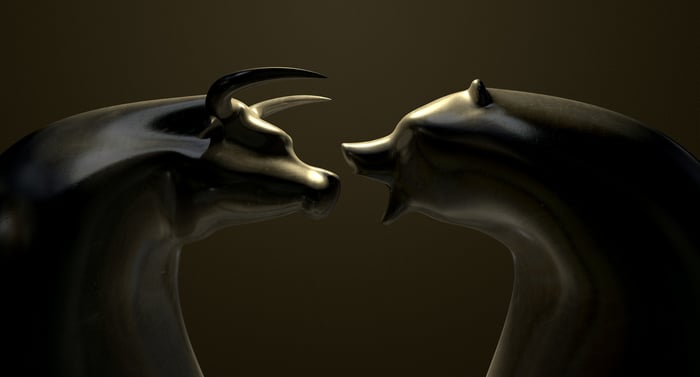 The bulls and bears are battling over the direction of Palantir's stock price. Image source: Getty Images.

On Thursday, however, investors apparently felt the sell-off in Palantir's shares was overdone. For one, Danielle Shay, director of options at Simpler Trading, disagrees with Weiss' call. "I'm looking at this as a five-to-10-year play as far as just buying and holding the stock," Shay said on CNBC.

While serving government agencies will remain a core focus, the long-term performance of Palantir's stock will come down to its ability to expand into the private sector. Palantir wants to build data platforms for the pharmaceutical, energy, and aerospace industries, among others. It's making significant progress in these areas with multiple major contract wins in recent months. If Palantir can continue to broaden its customer base, it's possible that it could grow into its lofty valuation over time.