A Recipe for Seduction was announced in simultaneous tweets from the official Lifetime and KFC accounts. Mario Lopez plays Colonel Sanders in this Lifetime original, presented by Kentucky Fried Chicken.

"We all have our secrets, his just happens to be a recipe for seduction," says the tag line. KFC hinted that Colonel Sanders will take his secrets "to the deep fryer." In a later tweet, Lopez promised to add "some sabor to the menu."

Many readers of the social media posts wondered whether this mini-movie was real or just a joke. Lifetime has indeed scheduled A Recipe for Seduction at noon this Sunday, in a 15-minute time slot. Afterwards, viewers will get a showing of Feliz NaviDAD, another Mario Lopez film. 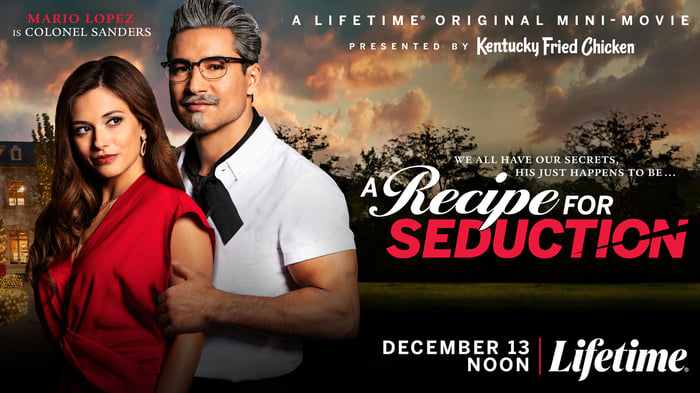 The movie is paired by a limited-time deal for six free extra crispy chicken tenders with any $20 order from KFC from Uber Technologies' (NYSE:UBER) Uber Eats.

A Recipe for Seduction will be available on Lifetime's web site and various mobile apps throughout this holiday season. The Uber Eats deal runs from Dec. 13 to Dec. 19.

This is not KFC's first foray into offbeat promotions. Judging by the social media response, it won't be the last. Consumers are paying attention to this campaign, retweeting Lifetime's post more than 20,000 times in six hours.