Shares of General Motors (NYSE:GM) were revving higher after the automaker delivered a strong third-quarter earnings report and benefited from bullish sentiment in the electric-vehicle sector as investors are beginning to appreciate the company's exposure to EVs.

Consequently, the stock finished the month up 27%, according to data from S&P Global Market Intelligence. It also benefited from broad market trends around coronavirus vaccine news and a positive response to the election results. 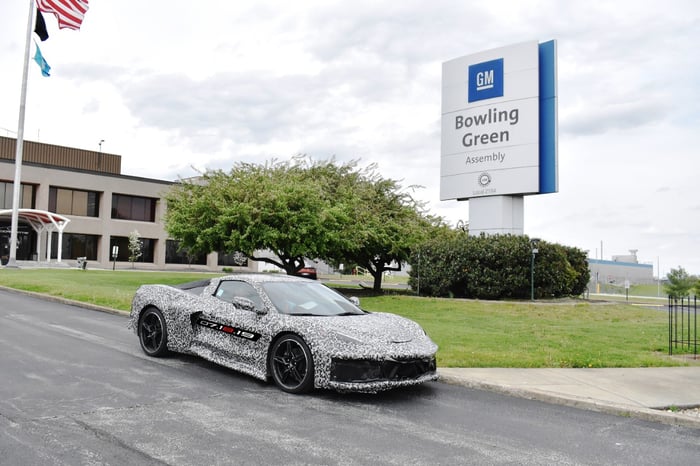 As you can see from the chart below, General Motors stock gained consistently over most of November following its earnings release at the beginning of the month. 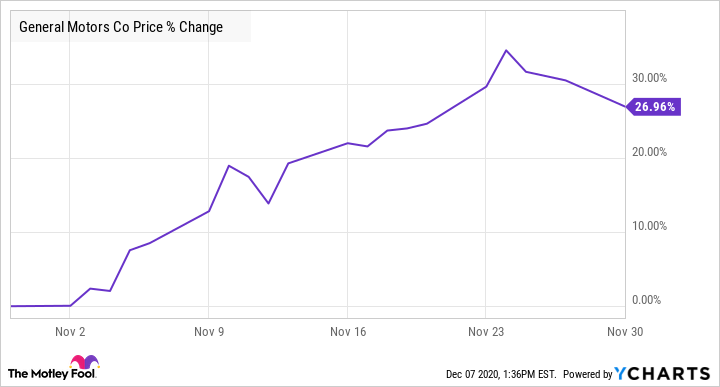 General Motors shares rose 5.4% on Nov. 5 after the company smashed through estimates in its Q3 report. Automakers have bounced back rapidly from the early days of the pandemic as demand for vehicles has soared in part because of an aversion to public transportation, and GM has been a beneficiary. Profits jumped thanks to consumers buying higher-margin SUVs and crossover vehicles.

GM's revenue in the quarter was flat at $35.5 billion, which essentially matched estimates. However, the factors above as well as cost-cutting and fewer markdowns drove a surge in adjusted earnings per share from $1.72 a year ago to $2.83, well ahead of the consensus at $1.38.

The following week the stock climbed again on news that Pfizer and BioNTech had produced a successful coronavirus vaccine and that GM said it would hire 3,000 engineers to accelerate its push into electric vehicles and autonomous vehicles (AVs). The week after that, GM again asserted that EVs were a priority, stating that it planned 30 electric-vehicle launches by 2025.

With the market now viewing traditional combustion vehicles as a declining industry, it's key that GM pivot toward new technologies.

Towards the end of the month, GM restructured its partnership with Nikola and said it would not take a $2 billion stake in the EV start-up, though GM still plans to supply fuel cell systems to the company.

As it focuses on EVs and AVs, GM offers investors an interesting opportunity since it is still priced as value stock even though it could be a leader in those new sectors. The challenge for GM will be to manage the decline of tradition combustion vehicles while transitioning to EVs and AVs.