Shares of Shopify (NYSE:SHOP) rose 17.8% in November, according to data provided by S&P Global Market Intelligence.

The e-commerce company's stock has more than doubled since the start of the year and continues to flirt with new all-time highs. 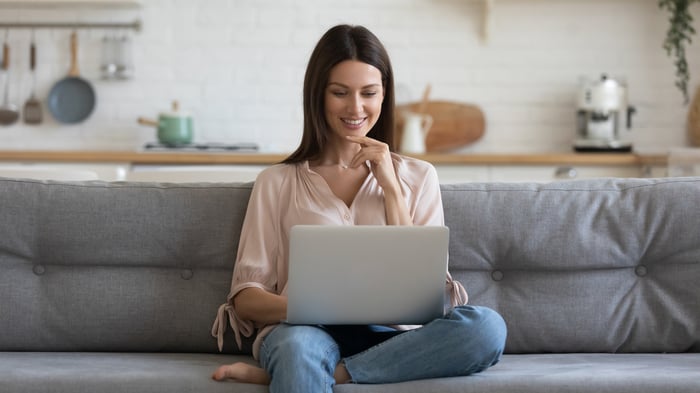 Shopify released a strong set of numbers for its third-quarter earnings report. In the quarter, revenue surged 96% year over year to $767 million. Overall revenue got a big boost from a 48% year over year jump in revenue from the subscription solutions segment. The increase was due to more merchants joining Shopify's platform as the pandemic accelerated consumers' shift to e-commerce. Entrepreneurs are also stepping up to provide products and services to meet this heightened demand, which explains the 132% year over year growth in merchant solution revenue, a metric that's driven by increased levels of gross merchandise volume through the company's e-commerce platform.

This impressive growth was boosted by merchants coming off both the 90-day and 14-day trials and becoming paying customers at the same time, thus contributing to higher monthly recurring revenue for the business. President Harley Finkelstein described how Shopify provides merchants with tools to help them get more easily discovered by new buyers, as research shows that 80% of a business' future profits come from buyers who are repeat customers. The strong financial performance has led to Shopify reporting a net profit for the quarter, reversing the loss it incurred during the same period last year.

Shopify's growth momentum is boosted by a strong network effect as successful and satisfied merchants refer another merchant to join its platform. Over the past 12 months, 37,400 existing merchants helped to refer a new merchant to Shopify, up significantly from the 23,000 in the prior 12 months. As more merchants join the network, they attract a larger and more diverse base of buyers, thereby making the platform more valuable, and the virtuous cycle continues.

Shopify is also thinking of new ways for merchants to market their products. The company launched a TikTok social media channel during the quarter to assist merchants in selling their products and to test out new features that will enhance their reach. This move should further improve the platform's attractiveness to potential entrepreneurs and allow Shopify to capture more merchants onto its platform.

Investors can benefit from Shopify's strong network effect as it continues to attract merchants and buyers. The pandemic has led to a structural change in how entrepreneurs start their businesses that will act as a sustainable tailwind for Shopify, making its shares an attractive long-term investment proposition.