Please ensure Javascript is enabled for purposes of website accessibility
Free Article Join Over 1 Million Premium Members And Get More In-Depth Stock Guidance and Research
By Adria Cimino - Dec 9, 2020 at 6:40AM

Don't expect just one or two winners in the coronavirus vaccine race. Be prepared for several.

Pfizer ( PFE -3.82% ) and Moderna ( MRNA -14.54% ) are heading for the finish line in the coronavirus vaccine race. The U.S. Food and Drug Administration will meet with advisory committees to discuss their requests for Emergency Use Authorization (EUA) on Dec. 10 and Dec. 17, respectively. At that point or soon thereafter, the regulatory agency may decide on whether the two companies may be begin offering their investigational vaccines to the public.

But this doesn't mean the race is over. Eleven other programs remain in phase 3 studies. Now the question is: Which companies may be next to cross the vaccine race finish line? Let's take a look at two that are closest right now. 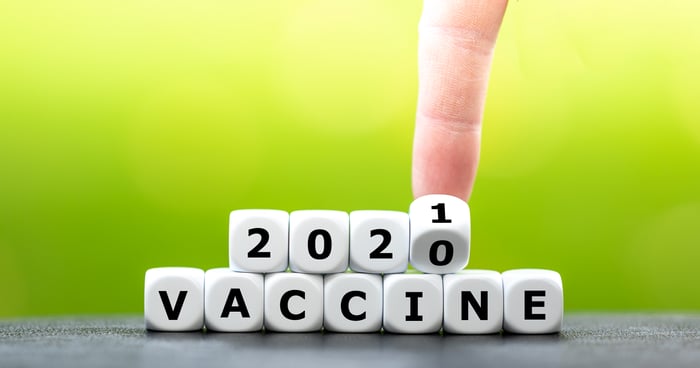 AstraZeneca ( AZN 2.36% ) reported interim results from a phase 3 trial in the U.K. and Brazil last month. But efficacy wasn't as high as Pfizer's 95% or Moderna's 94.1%. The company's most effective dose schedule vaccinated some participants with a half dose, then a full dose a month later. Other participants received two full doses a month apart. The former regimen was the most successful, showing 90% efficacy. The latter had 62% efficacy. The analysis of both dosing regimens resulted in an average of 70% efficacy for the trial as a whole, which still surpasses the FDA's bar of 50% efficacy, and puts AstraZeneca on the right track for regulatory approval.

In the data report, the company said it was "immediately" preparing submissions to all regulatory agencies worldwide that offer emergency authorization. In some cases, due to the urgent nature of the situation, decisions have come quickly. For example, the U.K. granted an authorization to Pfizer on Dec. 2, about two weeks after Pfizer completed its phase 3 efficacy study. With that as a guide, we may expect authorizations from some countries as early as this month.

AstraZeneca's major advantage is capacity. The big pharma player says it can produce as many as 3 billion vaccine doses next year. That's compared to Pfizer's production goal of 1.3 billion doses and Moderna's plan for 500 million to 1 billion doses.

Johnson & Johnson ( JNJ 2.13% ) fell behind when it had to temporarily pause its phase 3 trial in early October due to participant illness. The big pharma resumed the study a few weeks later after investigations showed the event wasn't linked to the vaccine candidate. (AstraZeneca's phase 3 studies temporarily came to a halt in September; like J&J, a case of participant illness wasn't related to the investigational vaccine so the trial resumed.)

J&J hasn't said when it may be ready to generate interim efficacy and safety results. Considering the pace of the trial so far and the pace of rivals, we might expect some data from J&J in the first quarter.

The company said this month that it has launched rolling submissions with the European Medicines Agency and Canada's regulatory agency. Rolling submissions allow a company to submit data as it becomes available instead of waiting until the end of a trial to submit a complete report. This way, regulators may start reviewing early, speeding up the process.

Like AstraZeneca, J&J has an element that sets it apart. J&J is developing a one-dose vaccine. All of the rival American or European vaccine candidates in phase 3 are two-dose vaccines. A one-dose shot is an advantage. For patients, it means fewer jabs. For providers, it simplifies storage and means more people can be vaccinated with a limited supply.

Considering the worldwide need for a vaccine, there is room for several players. That means  there are plenty of options for us as investors. We don't have buy shares of only the companies that may be first to market. AstraZeneca and J&J both have pledged to sell their vaccines without taking a profit during the pandemic. So investors won't see soaring vaccine revenue right away if regulatory agencies give their vaccine candidates the nod. But these companies may benefit after the pandemic, when they likely will take revenue from sales of the product. AstraZeneca's capacity and J&J's one-shot vaccine may make these players among the most successful.

And finally, one more positive element: AstraZeneca and J&J, with vast product portfolios, won't depend on the COVID-19 vaccine for revenue or their success. And that means you, as an investor in their stock, don't have to either.