XPO Logistics (NYSE:XPO), one of the world's biggest providers of logistics and transportation services, is set to split in half.

The company will spin off its contract logistics segment, which includes 200 million square feet of warehouses in 27 countries around the world, from its transportation business. The latter is made up of its freight brokerage, less-than-truckload (LTL) business, and last-mile e-commerce business, which specializes in delivery of heavy goods like appliances and furniture. Freight brokerage and LTL make up the bulk of the transportation segment, contributing 90% of EBITDA.

Wall Street cheered the move, sending the stock up 5.8% on Dec. 3,but the news wasn't a complete surprise. XPO had announced a strategic review of its business in January, which included selling or spinning off all parts of the business except for LTL. At the time, CEO Brad Jacobs said that despite the stock's strong performance, it continues "to trade at well below the sum of our parts and at a significant discount to our pure-play peers."

In March, as the pandemic struck and with the economy in free fall, the company canceled the review to focus on the health of its employees and delivering for its customers. In October, it quietly restarted the process, which reached fruition this past week. In a press release, the company said, "After a thorough examination of all strategic alternatives, the XPO board currently believes that the optimal path to unlock aggregate equity value is to create two independent companies that are each well-equipped to capitalize on secular growth trends in their sectors."

Under the plan, which would close the second half of next year, XPO's logistics business would be spun off as NewCo, a placeholder name, with current XPO CEO Jacobs becoming chairman and the current logistics management team likely to occupy the C-suite. Jacobs will continue to be CEO of the transportation business, which is being called RemainCo, also a placeholder. 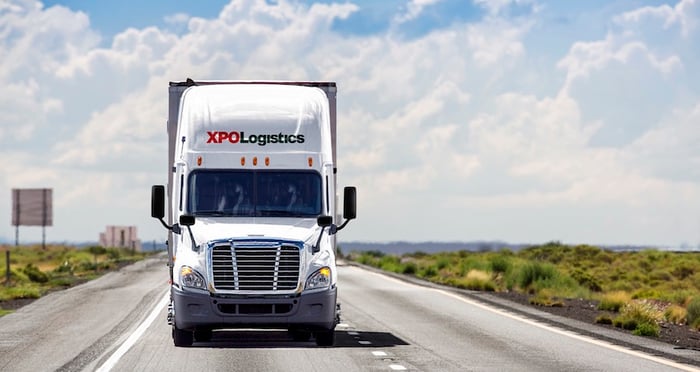 Jacobs has argued in the past that XPO is undervalued because it trades at a "conglomerate discount." Because the company is more complex than most logistics and transportation companies, the thinking goes, it trades at a lower EBITDA multiple than its peers, and XPO was told as much by investors. Separating the logistics and transportation businesses may be the simplest way to unlock that value and get a higher multiple.

In addition to the immediate goals of adding shareholder value and simplifying the businesses from an operational perspective, the company sees a number of other advantages in separating the two businesses. First, management believes it will be easier to improve each business's debt profile as separate companies, as each can cater to investors specifically interested in that business and raise capital according to its performance. That aligns with XPO's goal of achieving an investment-grade credit rating at each company.

Similarly, as separate companies, the businesses should have an easier time making M&A deals that are in their strategic interest. Above all, as a strategic rationale, XPO seems most interested in the spinoff because it will allow each business to focus on its own strategy and customer base, developing technology that aligns with its particular function and allowing for equity compensation to correspond with the performance of that business.

There are still a number of questions to be answered about the spinoff, as XPO has yet to announce a management team for NewCo, and it's unclear if, or to what extent, there will be a strategic relationship between the two companies. Though there is some cross-selling currently between logistics and transportation, logistics operates on a contractual basis, providing warehouse space for companies often on a multiyear basis, while transportation is transactional, serving a base of 50,000 customers on an as-needed basis. The company has said that both NewCo and RemainCo will have access to XPO's robust technology suite in perpetuity.

Still, Jacobs is right that XPO has historically traded at a discount to pure-play LTL peers like Old Dominion Freight Line and Saia, despite XPO's having a similar operating margin in LTL, and also has a lower valuation than DHL and Clipper on the contract logistics side. Jacobs has a proven track record in generating shareholder value as XPO stock is up 1,250% over the last decade in part due to a "roll-up" strategy he executed several years ago, acquiring a number of freight and logistics companies. In one recent move, the company repurchased about a quarter of its stock in late 2018 and early 2019, a decision that now looks brilliantly timed. Back then, the share price was flirting with $50, and today it's up near $120 on the back of rapidly improving quarterly results.

It's too soon to determine how the spinoff will play out and if it will pay off, but given the history, betting against Jacobs seems like a bad move.