In the United States, marijuana is illegal at the federal level. But 15 states have legalized recreational marijuana on their own, while 39 allow medical cannabis. By 2025, the U.S. cannabis market is expected to double from a value of $16.9 billion this year. Even when we put the massive green wave sweeping the U.S. aside, we find that the Canadian legal pot market is also soaring.

So far, monthly cannabis sales in Canada suggest that the overall market is worth CA$3.3 billion annually, which is more than double its value last year. When it comes to favorable pot stocks, look no further than the trustworthy industry leaders. Today, let's look at why you should add Curaleaf Holdings (CNSX:CURA)(OTC:CURLF) and Aphria (TSX:APHA)(NASDAQ:APHA) to your portfolios before the year's end. 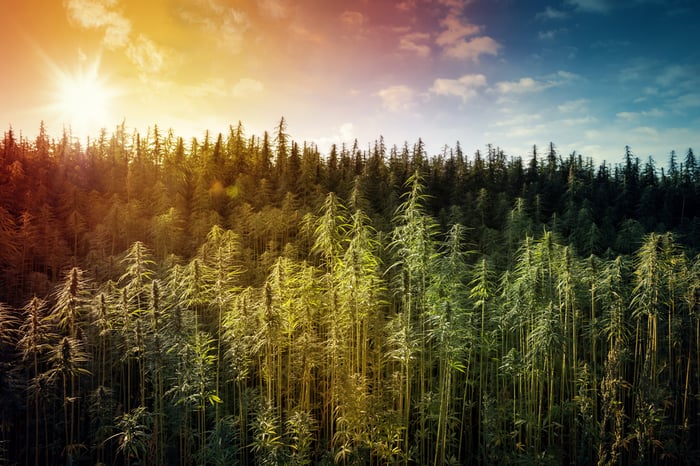 Right now, Curaleaf operates 96 dispensaries across 23 states and distributes its products at approximately 1,450 retail stores. The company has set up its locations strategically to cover about 85% of the addressable U.S. cannabis market. On top of that, it also has top market share across all New England states where weed is legal.

One of its fastest-growing segments is medical cannabis. Back in September, the company's monthly medical marijuana sales more than doubled compared to the same period last year. More than 151,000 patients spend an average of $109 per visit at one of Curaleaf's dispensaries every two weeks. Together, this customer base generates about $40 million in revenue per month.

For all the growth that it provides, the stock does not come cheap, with a valuation of 13 times revenue and five times net assets. However, that premium is more than justified considering Curaleaf plans to increase its dispensaries by 41% to 135 within the next few years.

On top of that, the company closed its acquisition of pot grower Grassroots back in July, which will add $22 million to Curaleaf's revenue this year. The deal also makes Curaleaf the No.1 biggest cannabis company in the globe in terms of sales. For those looking ahead to 2021 and ready to take a position in a leading cannabis company with spectacular growth rates, definitely consider Curaleaf.

Like Curaleaf, Aphria is also an industry leader in growing marijuana. As of Q1 2021 (ended Aug. 30), the company holds the No.1 market share in Canada, with its brands accounting for 14% of all cannabis sales in the country. In addition, its vape cartridges also have the top position in Canada in terms of popularity.

In its 2020 fiscal year, Aphria grew its revenue by a respectable 129% from last year to CA$543.3 million. At the same time, the company is becoming far more efficient with a 25% reduction in cash cost to produce its cannabis. The company's growth rate is outperforming that of its competitors in all four of Canada's most populous provinces.

A key secret to Aphria's growth is its diverse portfolio of pot brands. Right now, the company has it all: from flowers, pre-rolls, concentrates, vapes, to oils and capsules. It is also planning to produce topical cream, gummies, liquid enhancers, and cannabis-infused beverages.

The company has continued its momentum from last year. Back in Q1 2021, it managed to sell 20,882 kg of dried cannabis, up from 12,557 kg sold in Q1 2020. Last month, the company also acquired SweetWater Brewing in a $300 million deal. SweetWater is the manufacturer of the best-selling hemp-flavored beer in the U.S.

Despite its robust financials, its stock is surprisingly cheap, trading at just five times sales and two times net assets. If you are a marijuana investor on the hunt for value stocks in the sector for the new year, Aphria is an ideal candidate.