Aurora Cannabis (NASDAQ:ACB) was one of the biggest winning pot stocks last month. Its return of over 120% in November beat the S&P 500's 10% gain hands down. The company is part of a great trend in which Canadian pot growers are setting more realistic production goals after a couple of years of over-expansion.

With the stock gaining so fast, investors wonder if a small investment in the company could turn them into millionaires down the line. Today, let's look at whether or not there is in fact an explosive embedded in Aurora stock and if now is the right time to initiate a position. 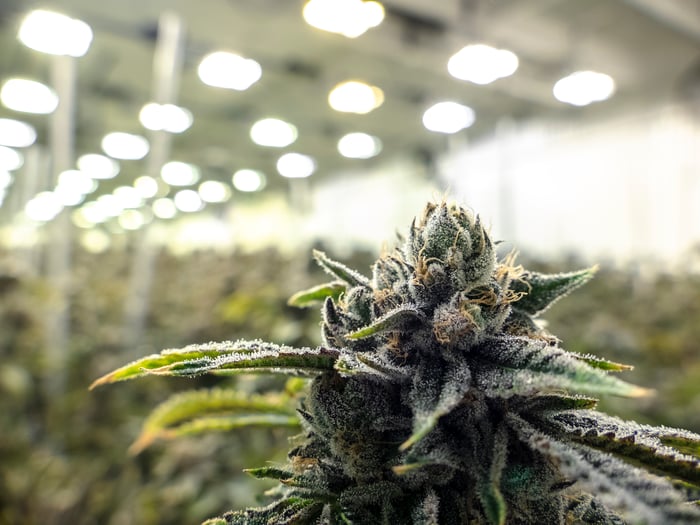 Some progress at last

Like all stocks that may have huge upside potential, Aurora must demonstrate that it generate impressive revenue growth. Luckily, the company has just that from its acquisition of hemp cannabidiol (CBD) company Reliva.

Reliva generates about $10 million in revenue per year and is among the top two most popular CBD brands across the country today. The other belongs to Charlotte's Web. Reliva's products are available in more than 20,000 retail stores. The pick up of these brands isn't bad considering this is Aurora's first expansive action into the U.S. market.

That's not all. Aurora took aggressive measures to close down production facilities and lay off employees back in June after its newly invested plants failed to make a profit. The company managed to reduce its annual production quotas from 500,000 kilograms (kg) of dried cannabis per year to 142,500 kg. Such cost-cutting tactics saved Aurora about CA$57 million per quarter in selling, general, and administrative expenses.

Right now, Aphria (TSX:APHA)(NASDAQ:APHA) boasts the title of biggest pot-grower in Canada, while Curaleaf (CNSX:CURA)(OTC:CURLF) dominates the U.S. market, both in terms of revenue. The winner's circle's dynamics may soon change, though, as Aurora is making significant progress to turn around the business. The company has finally achieved No. 1 market share in the Canadian medical cannabis sector, with over 85,000 active patients and 40% revenue growth quarter over quarter for the segment.

Despite significant progress, the company's share of woes still lingers. In the first quarter of 2021 (ended Sept. 30), Aurora's sales fell from 73.7 million Canadian dollars in last year's quarter to CA$67.8 million. Although its operating loss fell year over year by about CA$35 million, the company did recognize about CA$21.9 million in one-time expenses largely due to the termination of its partnership with the UFC.

Even though it is scaling down its business, the company's production is still excessive. During Q1 2021, it managed to sell just over 16,000 kg of cannabis, compared to about 46,874 kg produced in the quarter.

Since the company isn't profitable, it must rely on what's left of its cash balance and further stock offerings to stay afloat. Right now, the company has about CA$151 million worth of cash and investments, compared to about CA$185 million in loans and CA$322 million in convertible note liabilities. Over the past year, the company has issued more than 32 million shares to keep its operations going. The streak of stock dilutions may be near its end, as this is the third consecutive quarter that Aurora has been cutting down its operating loss.

Despite suffering a catastrophic blow to its expansion plans, Aurora proved that it could quickly scale down its operations to become more in line with what consumers ask for. As another example, the company managed to cut down its expenditures to CA$15.8 million versus CA$106.8 million in the same period last year.

Right now, the stock may be significantly undervalued compared to its potential. It trades for just 5.6 times revenue and 1.2 times net assets. As Aurora continues to focus on realigning its Canadian business with market conditions and pushes its U.S. expansion efforts, I'd expect Aurora to achieve its growth goals in no time. However, its many challenges ahead indicate that this is not a get-rich-quick stock, especially if one wants to turn a small position into a million-dollar holding. But for marijuana investors with a long-term contrarian mindset, I'd highly recommend checking out Aurora Cannabis' stock.