Everyone thinks of Alphabet (NASDAQ:GOOG)(NASDAQ:GOOGL) as an advertising company with nine products boasting over 1 billion users. That's fair. The company's Google search engine, Gmail, and YouTube are dominant in their categories. But there is another area where the company has been busy that doesn't draw as much attention. Healthcare could be the industry where Alphabet finds its next big product, and the company's strategy is painting a clear picture of where it might materialize. 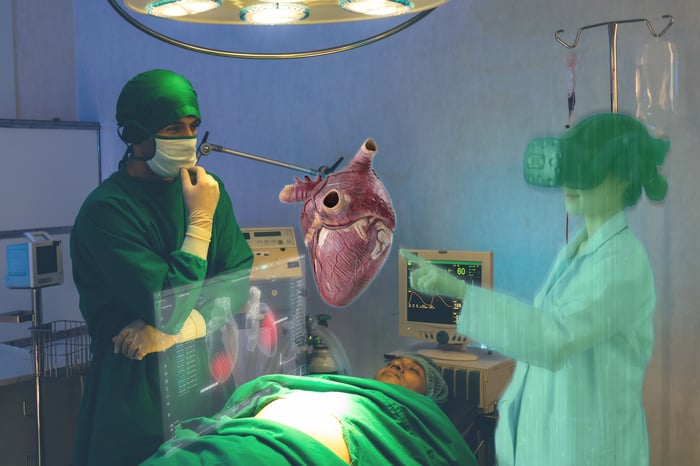 As of January 2020, Alphabet had bought more digital health start-ups than any other company. It now has 57 of these companies in its portfolio. The acquisition of Fitbit (NYSE:FIT) generated headlines when it was announced in November 2019 , but its investments and partnerships with healthcare service providers are more likely to be the gateway to the next big thing.

Aside from a few ancillary offerings, the company's investments have been focused on improving electronic health records (EHRs) and diagnostics capabilities, bundling healthcare services in the cloud, and leveraging its artificial intelligence expertise to advance scientific research. To get a handle on the company's strategy, let's explore a few examples in each area.

The market for EHRs is dominated by a few legacy companies, and Alphabet would rather improve the functionality of the existing systems than add another complicated system to the market. Last year, the company expressed interest in integrating search functionality with existing EHRs and introduced Suki, a voice-search clinical assistant.

Alphabet did form a partnership with EHR provider Meditech in 2019, making its EHRs available through Google's cloud as a subscription service. The additional functionality could alleviate many of the manual tasks that take up valuable time for clinicians, such as charting, billing, and data entry. While Meditech is moving its EHR into Google's cloud, there have been missteps. Epic, the EHR market share leader, abandoned a project with Google last January after a privacy concern. While Epic chose Microsoft's Azure and Amazon's Web Services (AWS) as partners, another EHR leader, Cerner (NASDAQ:CERN) also went with AWS. For Google to be successful in this area, it will have to shake off the data privacy stigma that seems to follow it from project to project.

Alphabet occasionally makes the news for finding new ways of using artificial intelligence to beat humans at a healthcare task. Last year, the company published a study showing that its deep-learning model could read chest X-rays at least as well as a radiologist.

The company has also used machine learning to predict patient needs, hoping to integrate the capability into existing EHRs. Two key areas of prediction are length of stay and likelihood of readmission. Both are measurements that currently drive reimbursement rates for health systems and significantly impact a patient's experience.

Although the EHR enhancements and cloud services overlap a bit, there are services that aren't necessarily constrained to any one system. For instance, Verana Health -- a company analyzing clinical data in ophthalmology and neurology -- received $100 million from Alphabet's venture capital arm. Alphabet also made a $100 million investment in telehealth provider Amwell (NYSE:AMWL) as it went public in 2020.

Alphabet is aiming to become a platform for developers building these healthcare solutions, as well. The company's Cloud Healthcare API (application programming interface) allows developers to build products in the cloud that can transfer data securely across multiple sources and leverage Alphabet's machine learning and analytics.

Research is an area where Alphabet can really show off its artificial intelligence. The company's life sciences arm, Verily, initiated a project in 2017 to describe a "baseline" for human health. By creating a platform and tools -- including wearables -- to collect health data, the company hopes to speed up future clinical trials. In 2019, four major pharmaceutical companies signed on to utilize the work. This makes Alphabet's pending $2.1 billion acquisition of Fitbit much clearer. If Fitbit users are generating health data that the company can use to create a more robust model for testing and developing new drugs, the smart watch company is far more valuable to Alphabet than it is as a stand-alone entity.

Finally, Google's DeepMind recently produced one of the most amazing discoveries in a half-century. Using powerful servers and machine learning, the company was able to predict the shape of a protein based on its amino acid sequence. This ability had been hypothesized in 1972 and has vexed scientists ever since. Now it is considered solved, and the discovery could revolutionize drug development in the future.

Alphabet has been very busy over the past few years in healthcare, even if its moves didn't always make the splashy headlines of a big acquisition or consumer product launch. Each deal is centered on using Google's analytics and deep learning expertise to incrementally improve the typical experience for healthcare clinicians and researchers. Further, the company is creating a platform for others to build new applications leveraging its services.

While it may not be competing directly with legacy healthcare companies, I believe Alphabet is slowly pulling the industry into its own circle of competence. Hosting EHRs in the cloud, offering enhanced search and predictive capabilities, and automating diagnostic capabilities creates a value proposition that cash-strapped health systems and cost-conscious insurers will find hard to ignore. Add in a platform of wearables that maps human health, and take into account the fact that 7% of all searches on Google are already health-related, and it's not hard to see the company one day offering an Android-type healthcare platform connecting consumers and providers.

Alphabet is playing the long game. A subsidized national healthcare offering in our lifetime, brought to you by Alphabet, wouldn't surprise me. As India's prime minister suggested at the World Economic Forum in 2018, if you control the data, you can control the world.