Please ensure Javascript is enabled for purposes of website accessibility
Free Article Join Over 1 Million Premium Members And Get More In-Depth Stock Guidance and Research
By John Rosevear - Dec 14, 2020 at 10:28AM

A secondary offering was oversubscribed, but it priced at a discount. Is that good or bad?

Shares of Chinese electric-vehicle maker NIO ( NIO 0.59% ) were trading lower on Monday, after the company said that a planned secondary stock offering had priced below Friday's closing price.

As of 10:15 a.m. EST, NIO's American depositary shares were down about 4% from Friday's closing price.

NIO said on Monday morning that its planned secondary offering has priced at $39 per share. That's a discount of 7.1% from Friday's closing price of $41.98, suggesting that the banks underwriting the offering needed to offer clients a bit of a discount to move the shares.

But on the other hand, NIO's offering was "oversubscribed," meaning that the underwriters opted to purchase additional shares above and beyond the initial planned amount.

NIO had said last Friday that it planned to offer 60 million shares, and that its underwriters -- Morgan Stanley and China International Capital Corporation -- had the option to purchase up to 9 million additional shares.

That was revised upward over the weekend. NIO is now selling 68 million shares (at $39), and the underwriters now have a 30-day option to purchase up to 10.2 million more.

That is generally considered bullish. So what does this all mean? 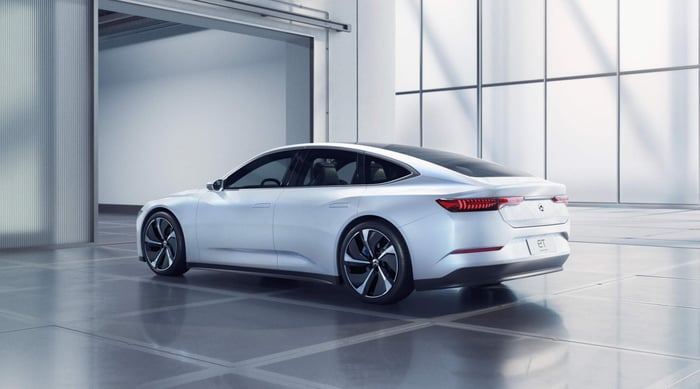 NIO said that it will use the proceeds of this offering for future-product development. The company is expected to launch two new sedans in 2021. Image source: NIO.

For auto investors who are thinking of NIO as a longer-term investment, here's what it means: NIO is about to raise a whole bunch of money at a pretty good price.

Sure, $39 is below where the stock was trading a week ago. But it's a lot higher than where it was trading a few months ago. The story of this offering is intact: NIO is taking advantage of the high valuation that has resulted from intense investor interest to raise additional funds to bolster its balance sheet.

That's still good news for the company, even if the price had to be discounted a bit to make it happen. And I think the fact that NIO was still trading above $40 as I write this suggests that most investors understand that.