The Dow Jones Industrial Average (DJINDICES:^DJI) was struggling to pick a direction on Wednesday, down about 0.1% at 11:50 a.m. EDT as the other major stock indexes were in the green. A weak retail sales report could be weighing on the Dow, while progress on stimulus and the continuing COVID-19 vaccine rollout are providing some sources of optimism.

Shares of Walt Disney (NYSE:DIS) were also stuck in neutral, even with an analyst raising his price target due to the company's streaming potential over the next few years. Disney stock trades near an all-time high thanks to optimism surrounding its streaming business, and despite its core business being hit hard by the pandemic. 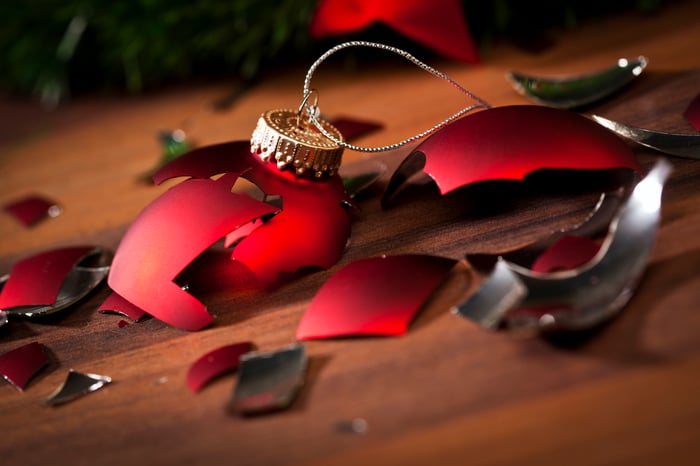 A combination of soaring COVID-19 case counts, renewed lockdown measures, and a lack of economic stimulus hurt the retail sector in November. The Commerce Department reported on Wednesday that retail sales dropped 1.1% in November from October on a seasonally adjusted basis, the second monthly decline in a row. Sales declines were widespread, and sales at non-store retailers were essentially unchanged from October.

The weak retail sales report could add more urgency to the effort in Congress to pass a new stimulus bill. Reuter's reported on Wednesday that congressional negotiators were close to agreeing on a $900 billion package, which will reportedly include extended unemployment benefits and a new round of stimulus talks. Without new stimulus, a cascade of small business failures could hurt the economy for years to come.

While the economic effects of the pandemic could last for years, the end of the pandemic itself is now in sight. The roll-out of Pfizer's COVID-19 vaccine has begun for high-risk individuals, and Health and Human Services Secretary Alex Azar told CNBC on Wednesday that there could be enough supply by February or March for the general public. Azar added that the timeline could be moved up if other vaccines are approved soon.

While there's now light at the end of the tunnel, the next few months will likely be painful on multiple fronts.

Shares of Disney are trading near all-time highs despite the company being hammered by the pandemic. Disney's parks were forced to close earlier this year, and the parks that have reopened are operating under restrictions. Notably, Disneyland in California remains shuttered.

The movie business has also been hit hard. The movie theater industry may not survive this crisis in its current form, posing a significant problem for Disney's business model of producing billion-dollar blockbusters.

Disney's hard pivot toward streaming has won investors over despite the problems facing the company. Disney disclosed last week that its flagship Disney+ service now has over 86 million subscribers, and it greatly boosted its 2024 target to a range of 230 to 260 million subscribers. For its entire streaming portfolio, which also includes Hulu and ESPN+, Disney is aiming for as many as 350 million subscribers by 2024. The company also announced a price increase for Disney+, which will be an early test of its pricing power.

The massive potential of Disney's streaming business caught the eye of Deutsche Bank analyst Bryan Kraft on Wednesday. Kraft raised his price target from $163 to $185 and reiterated a buy rating on the stock. Kraft sees Disney as a streaming leader, and he expects the company to report growing revenue and operating income through 2025.

Shares of Disney were roughly flat by late Wednesday morning. The stock is up about 20% in 2020.