America's largest publicly traded trash collector, Waste Management (NYSE:WM), has performed well throughout the pandemic. Its revenue is sprinkled throughout various public and private industries, so its numbers are holding up better than other industrials. For example, its commercial and industrial segments have declined, but residential and recycling are doing well as folks consume more goods from home.

Waste Management is emerging from the pandemic relatively unscathed. Let's analyze its performance, cost-saving initiatives, and dividend to determine if the company is a good buy now. 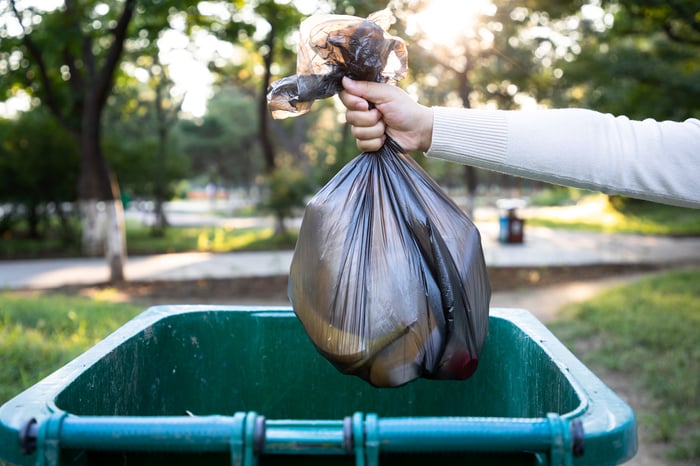 Like most industrial stocks, Waste Management struggled in the second quarter of 2020. Quarter-over-quarter revenue fell 10% and consolidated net income was down 20%. The company guided for second-half revenue to be 3.5% to 5.5% lower than the second half of 2019, with most of the damage coming in the third quarter. But third-quarter revenue only fell 2.7%, and the company's operating EBITDA, a profit metric, was similar to its record third quarter last year. In fact, Waste Management's third-quarter operating EBITDA margin was its highest in history, and it now expects to finish the year with an EBITDA margin of 28% to 28.5%. This basically tells investors that Waste Management is converting more revenue to profit, an encouraging sign considering that it achieved that milestone during a difficult time.

With 2020 performance just barely off last year's numbers, it will be interesting to see if Waste Management can sustain this level of profitability going into next year. Like most companies, Waste Management slimmed down and is running a tighter ship than usual. But management has a track record of getting through tough times and wants to keep some of its cost-saving initiatives around even after the pandemic ends.

During Waste Management's third-quarter conference call, CEO Jim Fish said that the company "has learned this year that we can permanently operate our business with a lower cost structure." He also mentioned the company would be committed to sustaining the efficiencies and cost savings it has implemented during the pandemic even after it returns to growth. 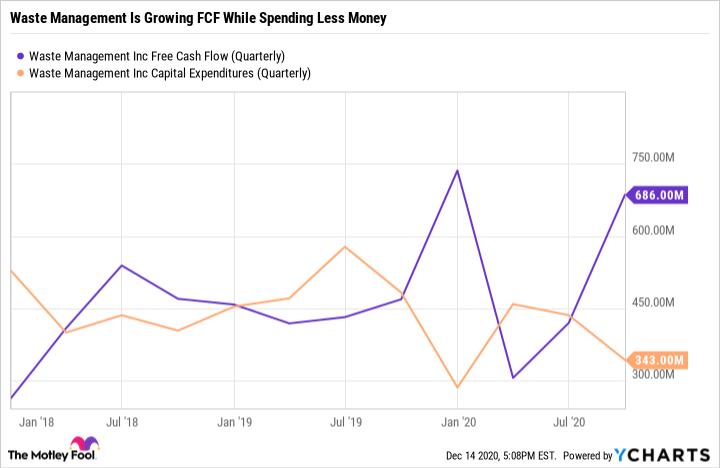 The prospect of permanently improved profitability is big news for long-term investors. Waste Management isn't a fast-growing company, but it's a stable and reliable industry leader that benefits from one of the most surefire tailwinds around -- a growing population. Higher margins will help Waste Management convert more revenue to profit as it grows naturally with the economy. Investors should track Waste Management's profitability in the coming quarters to see if it comes out on the other side of the pandemic as a better company.

Reduced spending is helping Waste Management generate some of its highest free cash flow (FCF) ever. FCF is the amount of operating cash flow left over after accounting for capital expenditures. Waste Management is generating record-high FCF in part because it's spending so little. Its FCF was around $1.4 billion for the nine months ended Sept. 30. About half of that was distributed to shareholders in the form of dividends, while the rest can be used to pay down debt, grow the business, acquire competitors like Advanced Disposal Services, or raise the dividend in the future.

FCF growth goes hand-in-hand with dividend raises. 2020 marked Waste Management's 15th consecutive annual dividend raise. Throughout this period, the company has consistently generated FCF in excess of its dividend, which has helped it grow into the market leader it is today. 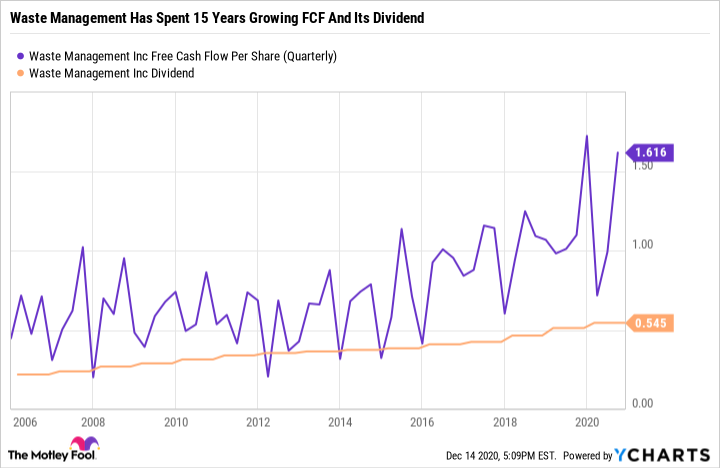 Waste Management earned 45% more FCF in the third quarter of this year than in the same period last year. It's currently generating three times the FCF it needs to pay its dividend. Even if it slows down from its record pace, the company could easily become a Dividend Aristocrat in 10 years.

Waste Management is positioned to close out a successful year. With a 1.9% dividend yield and effective cost savings, Waste Management looks to be a solid industrial stock to pick up now. Investors should make sure to follow the company's spending and FCF to see if both metrics can continue heading in opposite directions. It would also be worth watching the company's commercial and industrial revenue to see if improvements can translate into even more profit.