Please ensure Javascript is enabled for purposes of website accessibility
Free Article Join Over 1 Million Premium Members And Get More In-Depth Stock Guidance and Research
By Jason Hawthorne - Dec 17, 2020 at 7:21AM

A potentially huge advantage for the company's vaccine will soon have everyone talking.

Johnson & Johnson ( JNJ 1.46% ) is seen by investors as one of the most reliable companies around. The company has raised its dividend for 58 consecutive years. That reputation had been tarnished by litigation in the last decade, but management's announcement of progress toward a vaccine for COVID-19 offered hope the blue chip's once pristine image could be regained. Despite the fact that its clinical trials trail other companies from a timeline perspective, one detail will have people once again praising the company. 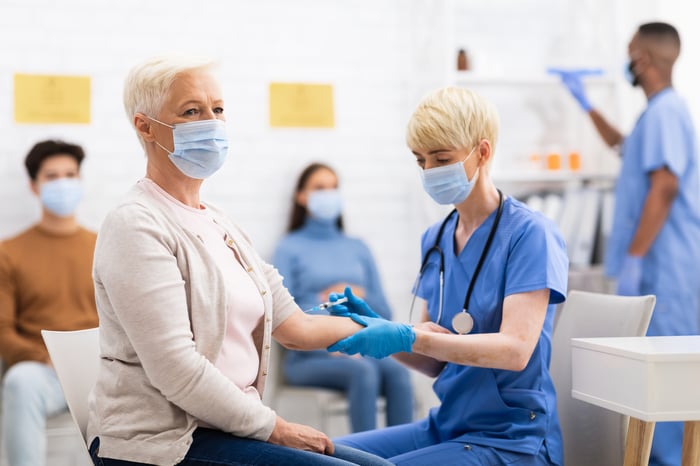 When people have talked about Johnson & Johnson in the last few years, it's often been about a product that harmed its customers. Settlements and judgments ranging from hundreds of millions of dollars to billions for faulty medical devices, misleading marketing, questionable testing, and contaminants have dominated recent headlines.

The controversy hasn't cost shareholders, though. The stock and its dividends have performed roughly the same as the overall S&P 500 over the past decade. When the pandemic broke out, Johnson & Johnson was quick to join the U.S. government's Operation Warp Speed (OWS), garnering $456 million in funds to develop a vaccine. The company would later receive another $1 billion for the manufacture and delivery of 100 million doses if approved by the U.S. Food & Drug Administration. It seemed a perfect opportunity to help change hearts and minds by associating the once-admired company with solving a national health crisis. 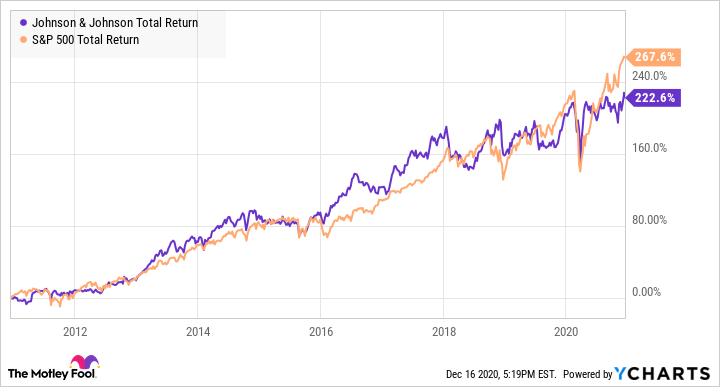 A chance to redeem the brand

Phase 1 trials of the company's vaccine candidate began in late July, and the drug entered phase 3 trials in September. The company now expects it will have results from the trial by the end of January 2021. As it turns out, the prevalence of COVID-19 has made it easier to evaluate vaccine efficacy and prompted management to cut the size of the trial from 60,000 participants down to 40,000. Unfortunately, the downsizing hasn't seemed to change the timeline.

If Johnson & Johnson wants to maximize the benefits of developing the vaccine, they need that timeline to hold. With the gene-based vaccine from partners Pfizer ( PFE 2.32% ) and BioNTech ( BNTX 3.17% ) shipping from manufacturing facilities, every day that passes could soon represent a million Americans getting a competing vaccine. That forces investors to ask how much opportunity will exist, assuming the company can deliver an approved candidate on its current schedule.

Pfizer isn't the only vaccine maker ahead of Johnson & Johnson. Although the Pfizer drug has gained emergency use authorization in the U.S. -- and approvals in the U.K. and Canada -- Moderna's ( MRNA 1.74% ) candidate is close behind. Novavax ( NVAX -0.92% ) also had a quick start developing a vaccine earlier this year, but delays have the company now projecting the end of December before its phase 3 trial is fully enrolled.

Johnson & Johnson does one big advantage -- and a few smaller ones -- despite trailing those companies. Unlike the Pfizer and Moderna vaccines, Johnson & Johnson's vaccine is stable in normal refrigeration for up to a month. Its drug also relies on traditional biological mechanisms unlike the recently developed gene-based offerings from Pfizer and Moderna. This could lead to much wider acceptance from those skeptical of the rapid development timeline.

I think that those are just small benefits. What do I think is the most important? Johnson & Johnson's vaccine only requires one dose. The company is running trials with two doses just to be safe, but one shot sounds a lot better than two for most people, and would make it far easier to inoculate a large number of individuals. The company has signed several agreements and hopes to produce a billion doses in 2021.

There is a lot of excitement about the Pfizer/BioNTech vaccine now being delivered and administered in the U.S. There should be. For now, I expect that their milestone will dominate the conversation. However, as other options get closer, I think most Americans will opt for the single shot of Johnson & Johnson's vaccine candidate if it proves as effective. That difference could lead to far more consumer demand, as well as sales and profits for shareholders. Johnson & Johnson is a diverse, stable company that still provides a way to play the COVID vaccine rollout for interested investors -- and it doesn't seem widely appreciated by the market.