The move, amid a frenzy of Christmas shopping, also includes its London stores.

Amid a spike in COVID-19 cases in California, Apple ( AAPL 2.28% ) announced on Saturday that it was closing all of its stores in the state. And as a new strain of the coronavirus sprouted up in London, it said it would close its stores in the greater London area as well.

Apple operates 53 retail locations in California and has over a dozen in London. It's the second major closure of its stores in the U.S. since Apple shuttered all its stores globally earlier this year in response to the pandemic.

Although the tech giant's online stores will remain accessible, the closures are ill-timed as consumers race to do last-minute Christmas shopping. 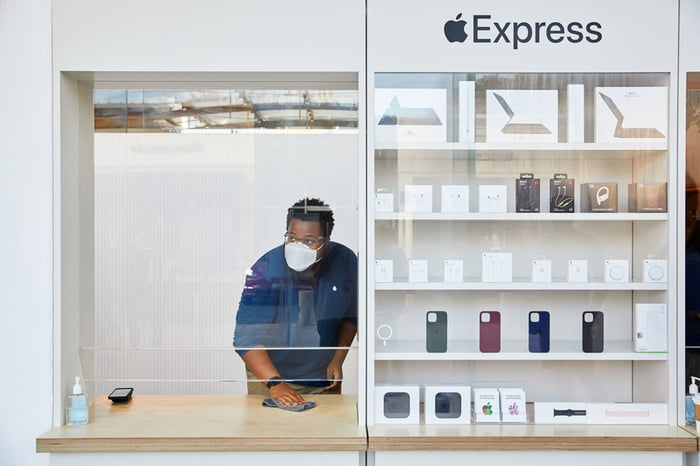 Despite having some of the toughest containment measures in place in the U.S., California is still seeing one of the most severe increases in new coronavirus cases. Some 1.8 million have been infected, with 22,400 fatalities.

In the U.K., Prime Minister Boris Johnson has imposed new lockdown orders and bans on travel. A number of countries have imposed travel bans from the U.K., although the country is still allowing people to fly in.

Apple stores that remain open elsewhere have converted to what it calls Express stores. Rather than allow customers inside, a reception area has been set up in front where shielded employees take customer orders and retrieve orders made online. Customers line up outside with social-distance spacing.

Apple posted record fiscal fourth-quarter revenue of $64.7 billion and is seeking to eclipse $100 billion in the first quarter, in part on sales of the iPhone 12.