Shares of disgraced Chinese coffee chain Luckin Coffee (OTC:LKNC.Y) might have fallen off your radar earlier this year after the upstart coffee chain was exposed for fabricating hundreds of millions in sales in March.

After the scandal came to light, Luckin's stock crashed and was delisted from the Nasdaq.  If you cast off Luckin as uninvestable, though, you missed the stock nearly tripling on Friday, Dec. 18. It gave back some of those gains on Monday. 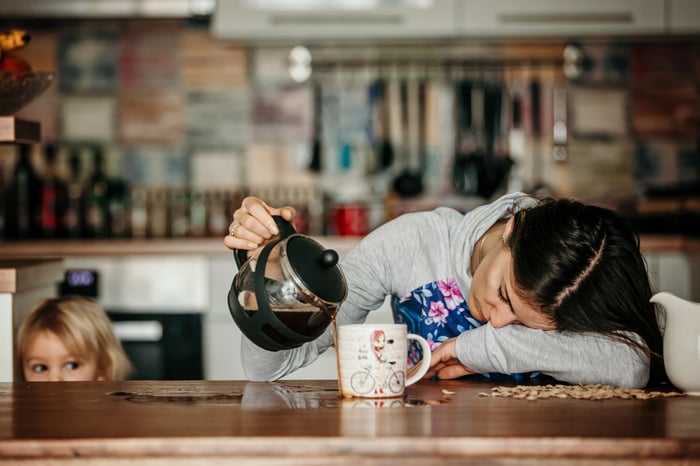 A settlement with the SEC

On Friday, Luckin announced that it had settled with the Securities and Exchange Commission. It agreed to pay $180 million in penalties for the reported fraud, which will be offset by some payments made to harmed shareholders.

In a press release, the company's new chairman, Jinyi Guo, said, "This settlement with the SEC reflects our cooperation and remediation efforts, and enables the company to continue with the execution of its business strategy."

The SEC also released a statement acknowledging "that the company self-reported the fabricated transactions to the SEC staff," but noting that the company "cooperated with the SEC throughout its investigation and promptly undertook significant remedial efforts. These efforts included initiating an internal investigation, terminating certain personnel, terminating relationships with third parties involved in the fraudulent conduct, reorganizing its finance department, and adding internal accounting controls."

The settlement of the issue likely removed one looming threat for investors. In response, the stock surged on Thursday and Friday, nearly tripling from just under $4 to over $10 before settling back to $8.20 as of market close on Monday. 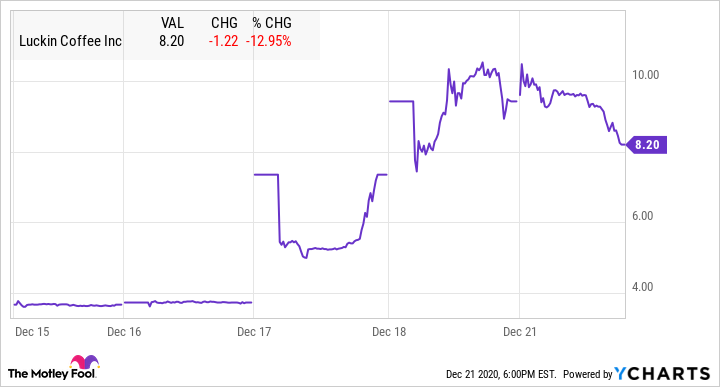 However, after Luckin's big run, there's still way too much uncertainty for all but the most speculative investors to even think about touching the stock. There are two major reasons.

We still have no idea what Luckin's financials really are

Since Luckin's fraud was revealed, it hasn't been able to issue any new financial statements for investors. The latest financial statements came after the company's third quarter of 2019. As of a year ago, the company had about $780 million in cash, but that was before it raised money from investors (under false pretenses) in January, to the tune of $418.3 million in American Depository Shares (ADS) and $446 million in convertible notes.

That raise would have swelled Luckin's coffers to about $1.63 billion. But Luckin had also been burning cash at the time it cut off financial disclosures. In the third quarter of 2019, the company reported it had burned 123 million RMB, or about $19 million, in operating cash. Meanwhile, it spent 352 million RMB, or $54 million, in capital expenditures.

If those numbers can be believed, Luckin is burning about $75 million per quarter. The breakout of COVID-19 likely poured accelerant on that burn. We really don't know. In all likelihood, the company's cash position is likely down at least $300 million, and possibly worse. Net cash, when subtracting out the convertible debt, would be another $450 million lower.

While the company may have enough cash to operate for the next couple years or so, investors can't really know that for sure. If Luckin needs to raise additional funds, doing so will be hard, especially since the company hasn't published updated financials.

Although the SEC praised Luckin for purging itself of the prior management and 12 other employees that perpetrated the fraud, there's reason to be skeptical. While the company linked the fraudulent sales back to certain executives, it wasn't able to pin anything on ex-Chairman and major shareholder Charles Lu. Lu refused to hand over his laptop and phone to the internal investigation at the company.

In a dramatic power move, Lu then convened a special meeting of the board, in which it voted to have the two directors conducting the investigation removed. Additionally, Lu had himself removed, but got the board to OK two of his hand-picked successors.

It was quite a feat. It not only allowed Lu to distance himself from the company and escape scrutiny, but also let him select two directors to the "new" board of directors, all while retaining his roughly 37.8% stake in the company.

Basically, investors still can't be sure whether Lu, who likely had a hand in the scandal to begin with, isn't still calling the shots at Luckin. Monday's give-back might be investors waking up to this. Current shareholders might also be looking to cash in after Friday's bounce.

There is no fundamental basis for any of the stock's recent rise, other than speculation around Luckin's potential financial state after the SEC deal. While that could be better than expected, it could also be much worse. Unless you have investable cash that you don't mind losing completely, stay away from this speculative Chinese stock.