One of this quarter's hottest NYSE debutantes is fuboTV (NYSE:FUBO). It priced its IPO at $10 in early October following a low-buzz springtime merger to quietly begin trading under the market's radar. The initial market reception was lukewarm for the live TV streaming service, but the stock has gone on to pop more than sixfold through Monday's close.

There are a lot of critics when it comes to fuboTV as an investment right now. Should what is essentially the country's sixth largest virtual MVPD (multichannel video programming distributor) be approaching a market cap of $10 billion? Can a streaming replacement for cable and satellite television ever achieve cost controls and pricing elasticity to deliver healthy profit margins? How dare fuboTV suggest that online gaming is a potential new revenue stream? 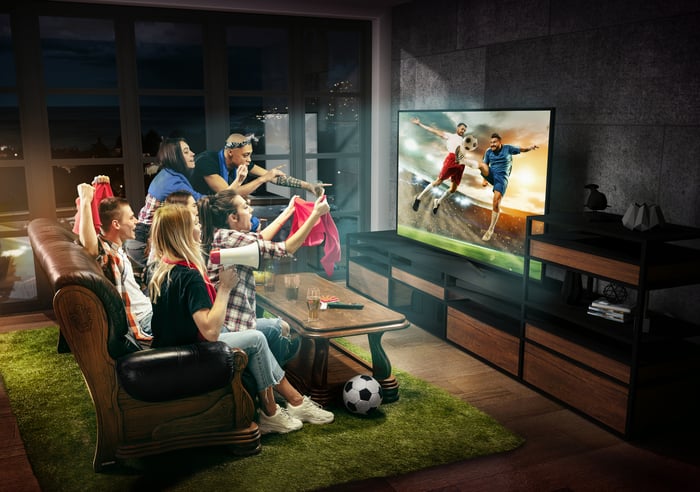 1. Growth is a game changer

Even fuboTV bears concede that the cord-cutting revolution is real. Consumers are kissing their cable bills goodbye, flocking to the live TV streaming services that offer more value and flexibility than old school platforms. The biggest knock on fuboTV is that it's too small a player. It had just 286,000 subscribers at the end of June when it hit the market, a year-to-date decline that illustrates how easy it is to come and go in this churn-happy niche.

As the only sports-first live TV streaming platform, it's easy to see why folks didn't want to pay $65 a month for a service when most of the pro and college sports leagues were on hiatus through the first few months of the pandemic. Now that it's "game on" in more ways than one, we're seeing fuboTV at 455,000 accounts at the end of September.

FuboTV may seem like a small fry in this potato patch. According to measurement and analytics firm ANTENNA it's the sixth largest virtual MVPD with a mere 5% share of the market as of September. Here's where growth and momentum start to matter. Pro forma revenue surged 71% in its latest quarter, more than overcoming the net cancellations through the first half of this year when the sporting world took a break. You're going to see bears comparing fuboTV to a lot of media and tech companies trading at lower multiples. Ask them if they are growing at a 71% clip, too.

The near-term outlook is even better. It was eyeing 410,000 to 420,000 subscribers at the end of this year when it was trying to drum up interest for its IPO in September. A month later the year-end target was bumped to 480,000 accounts. Last month the goal was boosted to between 500,000 and 510,000 paid subscribers by the end of 2020, and as I'll get to in the next section it's very likely to blast through that mark, too.

The same ANTENNA report that casts fuboTV as a small player in this growing market also offers encouraging insight into the explosion of the platform's popularity. FuboTV has seen its market share of new sign-ups go from 9% in July to 19% in November. In short, its share of new customers to virtual MVPDs has more than doubled over just the past four months. Only two services -- YouTube TV and Hulu + Live TV -- had a larger share of new sign-ups, and fuboTV is gaining market share at their expense.

In terms of costs, it's true that fuboTV isn't a traditional streaming service that can scale its programming costs and create its own content. However, how many bulls have taken the time to see how fuboTV's costs are growing relative to how much its customers are paying?

Average revenue per user (ARPU) was $37.93 a month in 2018, climbing to $53.73 last year and $67.70 in its latest quarter. These subscriptions aren't cheap, but bears thinking that costs are spiraling out of control may want to keep digging into the financials. FuboTV's average monthly cost per user has only gone from $40.59 in 2018 to $55.37 last year to $56.78 in its latest quarter. It's now generating a positive contribution margin.

FuboTV started to rally three weeks ago after announcing plans to acquire a developer of online tools for fantasy sports gaming. The initial strategy is modest. FuboTV will leverage Balto Sports' automation software with its homegrown tech to roll out a free-to-play gaming platform. Once that foot is in the door it's going to be that much easier to be the default gateway for more lucrative wagering.

The press release detailing the acquisition points out that Zion Market Research is forecasting that the online sports betting will be a $155 billion market by 2024. Bears will argue that fuboTV isn't going to be a major player in the online sportsbook market, and that's fair. Even a razor-thin slice will move the needle here. However, worrywarts arguing that fuboTV won't have an advantage over other virtual MVPD platforms are missing the appeal of its laser focus on sports. It has more than three dozen sports channels among the more than 100 channels it offers. It offers some live sports TV in 4K. If you're a sports fan looking for a live TV streaming service to replace your cable or satellite television plan you're going to have fuboTV at the top of your list. With its now rapidly expanding subscriber base it's going to be a big draw as either a direct player in online gaming or as a platform collecting the marketing dollars of larger players that want the attention of fuboTV viewers.

The fuboTV valuation is steep. It's competing against some companies with more financial resources, and sports programming costs aren't cheap. It's going to be one of the more volatile IPO stocks, and it was already giving back a good chunk of its recent gains early in Tuesday's trading. However, getting in the way of growth, momentum, and commanding pole position among MVPDs for the online wagering jackpot isn't a good idea.