Trulieve Cannabis (CNSX:TRUL)(OTC:TCNNF) is a U.S. pot grower that has blown by many shareholders' expectations. Over the past year, pot stocks, as measured by the Horizons Marijuana Life Sciences ETF (TSX:HMMJ) index, have dipped 7%. Meanwhile, Trulieve has delivered a stunning 203% growth in investors' principal.

But it's important to remember that past performance is no guarantee of future results. Will Trulieve be able to keep up its track record from now to 2025, or should investors consider alternatives? Let's find out. 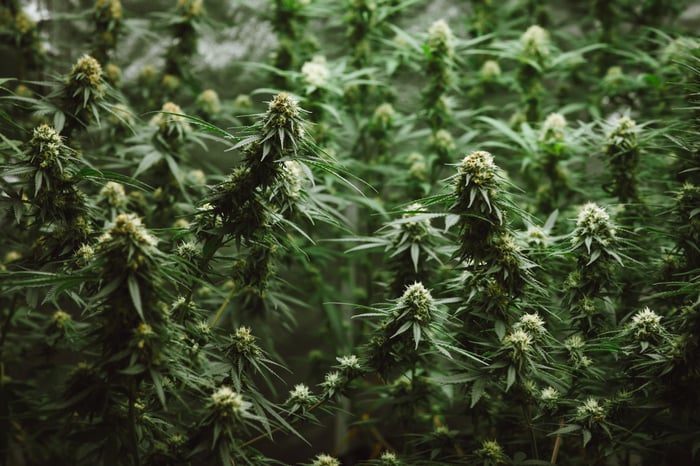 In the third quarter of 2020, Trulieve grew its sales by a whopping 93% year over year to $136.3 million. Simultaneously, the company's operating income less non-cash items (EBITDA) increased by 83% to $67.5 million in the same period. The company also attained a positive net income of $17.4 million and has been profitable since 2017. For 2020, the company expects up to $485 million in revenue and $225 million in EBITDA. Both are impressive increases over the $252.8 million it delivered in sales and $132.5 million in EBITDA from 2019.

Right now, Trulieve operates 73 dispensaries across six states, with 68 of its stores in Florida. That's also where the company leads in market share, boasting 52% of Florida's medical cannabis industry.

Aside from medical marijuana, Trulieve also has a foothold in dried cannabis, vape cartridges, edibles, concentrates, topicals, and other accessories. It is currently the fourth largest U.S. pot grower by revenue, behind Curaleaf (OTC:CURLF), Green Thumb Industries (OTC:GTBIF), and Cresco Labs (OTC:CRLBF).

Many signs are pointing to Trulieve's continued business momentum. For starters, an initiative that calls for the legalization of recreational cannabis in Florida on the 2022 election ballot has already gathered 555,000 signatures, and a few hundred thousand more are required. If that goes well, it could increase the size of the marijuana industry in the state from $1 billion to $2.5 billion.

Whether you like it or not, the reality is that states overwhelmingly favor big, well-established dispensaries over small growers when it comes to handing out operating licenses. To get one in Florida, companies need to be vertically integrated, meaning that they must own their entire supply chain -- from cultivation facilities to distribution to retail stores. That should help Trulieve consolidate its revenue in the event of recreational legalization and keep competitors at bay.

Second, Trulieve recently completed the acquisition of Pure Penn. With its Moxie cannabis brand in 92 wholesale and retail locations, nearly all of Pennsylvania's pot consumers are able to access Pure Penn's products. By 2025, the Pennsylvania cannabis industry could be worth $770 million and sport an annual growth rate of 10.6% per year. This growth would almost definitely be realized if Pennsylvania legalizes recreational cannabis next year. The odds of that happening just increased last month, after neighboring New Jersey voters cast their ballots in favor of legalization.

Finally, the company is making a big move into California. Back in 2018, the company acquired Life Essence, which has a cultivation capacity of 140,000 sq. ft. (about 7% of what its Florida facilities can produce). Trulieve projects Life Essence will become operational by Q1 2021 and tackle a piece of the $1.46 billion market opportunity for cannabis in California when that happens.

Right now, Trulieve is a little expensive at 9.1 times book value, 8.9 times revenue, and 56 times earnings. However, the company is on track to double its revenue this year. I think Trulieve can also maintain its momentum by expanding into new markets, especially in Pennsylvania and California, and further growing its reach in Florida.

By 2025, I expect Trulieve to become a billion-dollar cannabis company in terms of sales, and establish itself as a medical marijuana leader across the nation. For investors who are thrilled about pot stocks that are poised for growth, Trulieve is a fantastic choice. For others who think the price may be a bit high, or simply have a more value-orientated mindset, consider this bargain marijuana business instead.