Dividend stocks aren't generally known for generating tremendous gains over short periods. They're a lot more like the tortoise in Aesop's fabled race than the hare. Given enough time, dividend stocks can make investors a lot of money. The key, though, is to give the stocks enough time.

There are some dividend stocks, however, that are more hares than tortoises. They pay attractive dividends and deliver impressive growth at the same time. One such stock especially stands out, in my opinion. I think that the dividend stock most likely to double in 2021 is... Innovative Industrial Properties (NYSE:IIPR). 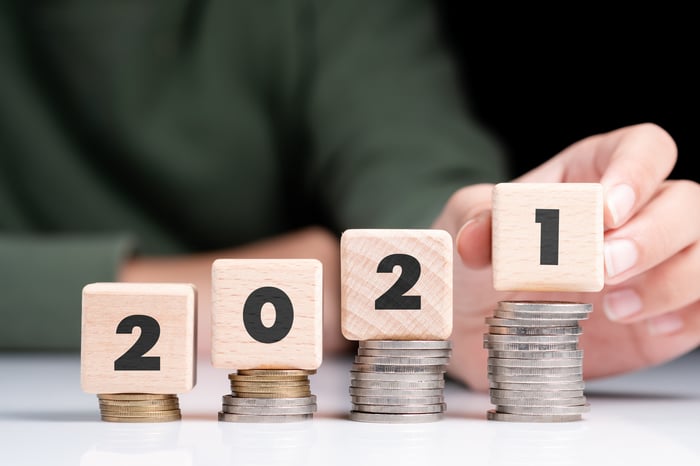 Innovative Industrial Properties ranks as the leading real estate investment trust (REIT) focused on the U.S. medical cannabis industry. The company's business model is to buy properties from medical cannabis operators then lease the properties back to the operators. These transactions provide capital to the cannabis companies and a steady revenue stream to IIP.

As a REIT, IIP must return at least 90% of its taxable income to shareholders in the form of dividends. That's exactly what the company has consistently done since 2017. Over the last three years, IIP has nearly quintupled its dividend payout. Earlier this month, the company boosted its dividend by 6% from the previous quarter.

As you might expect, the cannabis REIT's earnings have risen significantly higher to fund those dividend increases. IIP became profitable in late 2017 and has seen its bottom line steadily climb since then. 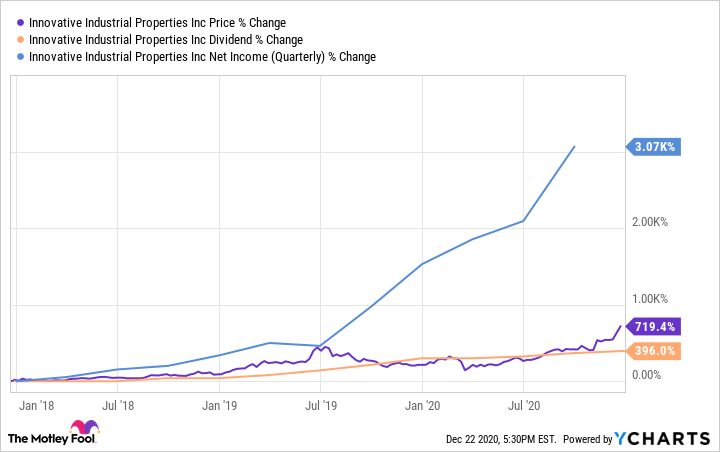 Strong earnings growth tends to drive strong stock performance. IIP hasn't been an exception. Its shares have skyrocketed more than 160% so far this year.

Why it's likely to double again

Just because Innovative Industrial Properties way more than doubled in 2020 doesn't necessarily mean that it will double in 2021. However, I think it's likely to do so for three key reasons.

First, IIP's success so far has come from adding more properties. The way for the company to continue growing is really straightforward -- keep doing what it's been doing. IIP really doesn't have to change anything about its strategy to continue achieving tremendous success.

Second, despite its impressive growth IIP remains a small company. Smaller companies usually have an easier path to doubling in a short amount of time than big companies do. IIP's market cap is less than $5 billion. Its portfolio includes 66 properties, a relatively small number.

Is IIP a slam dunk to double in the new year? That's probably taking it too far. There are a couple of potential obstacles that could get in the way.

Most stocks are dragged down when the overall market tanks. This happened with IIP earlier this year in the coronavirus-fueled market meltdown. If the stock market plunges in 2021, it's likely that IIP will fall too.

IIP currently benefits from federal marijuana laws in the U.S. Marijuana remains illegal at the federal level even though a majority of states have voted to legalize medical and/or recreational cannabis sales. Cannabis companies also have restricted access to financial services that most companies take for granted.

If financial restrictions for the U.S. cannabis industry are lifted this year, it could make IIP's real estate capital alternative less appealing to medical cannabis operators. And if federal laws were changed to recognize the rights of states to enforce their own cannabis regulations, other REITs could decide to enter the market. This could cause IIP to offer more attractive lease terms to be competitive, which in turn could negatively impact its revenue and earnings growth.

Either of these obstacles could derail IIP's path to doubling in 2021. However, I'm optimistic about the company's prospects and expect another great year from this high-flying cannabis stock.