Please ensure Javascript is enabled for purposes of website accessibility
Free Article Join Over 1 Million Premium Members And Get More In-Depth Stock Guidance and Research
By Jennifer Saibil - Dec 30, 2020 at 10:15AM

The popular retailer provided essentials in 2020. But even if customers slow down their stocking up, Costco will still see growth.

Shopping at Costco ( COST -0.58% ) is a popular American activity, and customers kept up their bulk shopping outings throughout the pandemic. Costco had high sales increases, powered by in-store shopping and also strong digital growth.

2020 was a great year for the bulk-buy king, but 2021 will be also, even as people begin to spend on non-essentials. Here's why, and why it will continue to be good for investors.

Costco stepped up to the plate as customers hoarded toilet paper and other essentials throughout lockdowns. But even after most lockdowns had been lifted in the 2021 first quarter, ended Nov. 22, sales grew 17%, and e-commerce increased 86%. 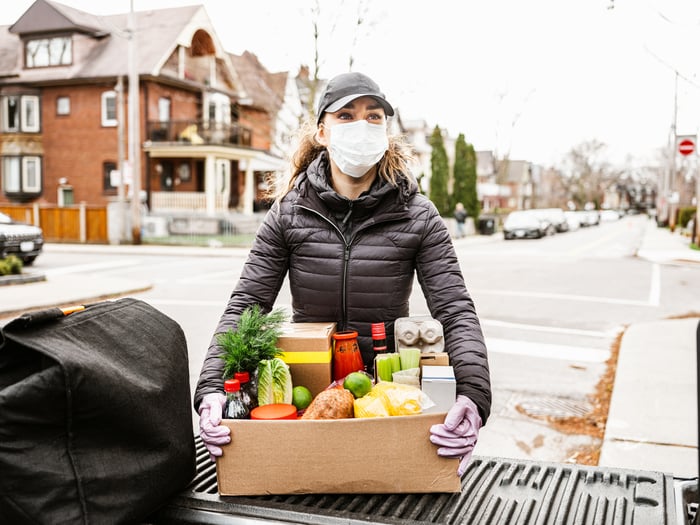 Online grocery sales grew 300% in the third quarter, an important development as digital continues to take a chunk out of the traditionally storefront category. Costco also works with third-party programs for same-day grocery delivery services, and inclusive of this program, e-commerce comps were up 100%. This is a nice growth in a slice of the pie that Amazon and other grocery purveyors are trying to overtake.

2020 turned out to be another great year for Costco, but here's why 2021 might end up being even better.

Returning to a state of normalcy

Travel and other ancillary units were closed for the worst parts of lockdown, and sales from these units, which include gas, optical, hearing aids, and food courts, were pressured while some remain closed and travel is still a fraction of what it was before the pandemic started.

Despite the ancillary business closures, the company did well because of the increased emphasis on essentials purchases. Some spending from challenged categories shifted to home improvement items such as furniture and exercise equipment, but there were delays in meeting demand due to the pandemic.

Travel has started its return to regular function. With the advent of the vaccine, the travel category should see an upswing, and logistics problems are expected to resolve by March 2021. The demand for other large purchases may decrease when travel and leisure activities resume, since some of that purchasing power will shift back to travel. But Costco should see growth in some of these categories in the coming quarters.

Membership retention is high, typically around 90%, and membership grows every quarter, up to more than 107 million cardholders in the first quarter. Paid executive memberships, which cost double the standard $60 fee, increased as well, to over 23 million at the end of the first quarter.

That's not a whole lot as compared with Walmart, the largest U.S. retailer, which operates more than 11,000 worldwide stores and over 5,000 in the U.S. Costco does not operate in all U.S. states, and has a lot of room to grow.

Costco pays a quarterly dividend that's not too spectacular, yielding only 0.75%. But it issues a special dividend every few years, including a $10 dividend in November of this year, bringing its average total yield into pretty high territory.

Stores will open all of their units as travel picks up, and Costco will see higher growth with its expansion. Costco is likely to see continued growth and another great year in 2021, bringing more gains for shareholders.