Cannabis-focused real estate investment trust Innovative Industrial Properties (NYSE:IIPR) has been on a tear in 2020, up a stunning 153.5% year to date, including dividends. 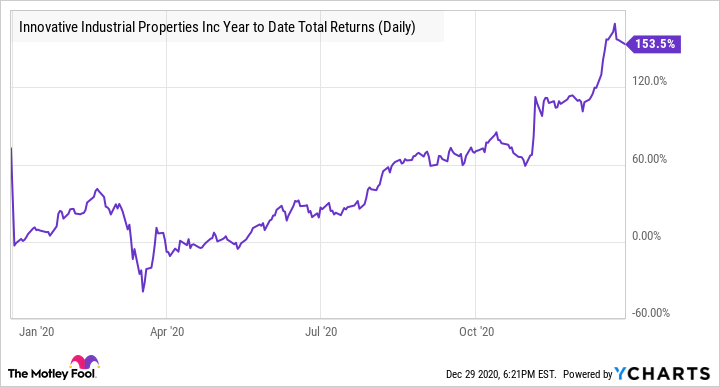 As one of the few U.S.-based cannabis-related stocks that is actually able to trade on major U.S. stock exchanges, Innovative Industrial has benefited from a renewed surge of interest in U.S. cannabis. The industry is in hyper-growth mode, and Innovative's healthy 2.6% dividend looks pretty good in a world of super-low interest rates and bond yields. The dividend per share also surged 50% last quarter relative to the year-ago period, and investors have bid up Innovative's shares higher in 2020.

Still, while the company has been executing extremely well and capitalizing on the fertile U.S. cannabis opportunity, there could be some headwinds for the stock next year. 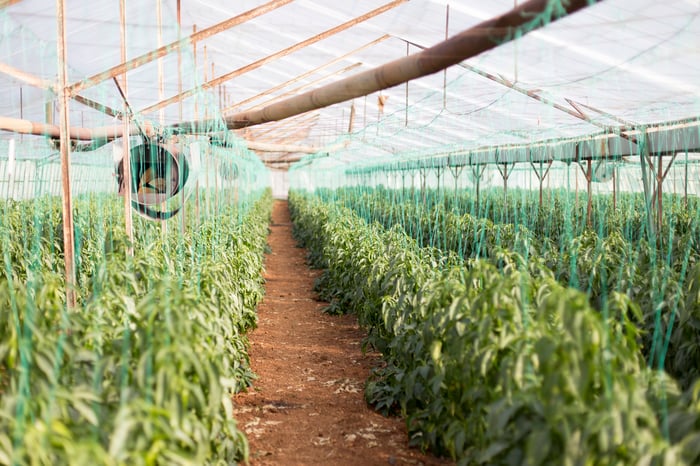 Right now, Innovative Industrial is earning some pretty good returns on its real estate. U.S. cannabis operators, still operating under the shadow of being illegal at the federal level, don't have access to national banks, and they are taxed at much higher levels than typical companies. As such, cannabis operators are willing to sell their real estate to Innovative Industrial at pretty good prices in order to raise cash for growth, given their lack of options.

Innovative ended last period with $885 million in real estate held for investment, up from $791.6 million in the second quarter. On that average of $838.3 million in property, the company earned $20.4 million in operating income in the third quarter, good for a 9.7% yield. And keep in mind, most of its leases contain contractual increases over their lives, which as of last quarter had an average remaining term of 16.1 years.

Those are really attractive cap rates in this age of super-low interest rates. This summer, depending on the market, industrial property cap rates ranged between 3.75% and 6%, according to CBRE Group. And not only that, but unlike many other REITs which take on debt to juice their returns, Innovative Industrial also has very little debt, consisting only of $143 million in exchangeable notes due 2024. Innovative also ended last quarter with a war chest of about $612 million in cash and short-term investments ready to deploy. Assuming Innovative can deploy that for similar returns, it could increase operating income to $140 million or so, without having to raise any more money.

That would bring Innovative's price-to-operating earnings ratio to around 28.7. That's not cheap, but it's not wildly expensive either, given the high-growth cannabis opportunity.

But a potential headwind lurks

Ironically, the prospect of pro-cannabis regulation could actually hurt Innovative Industrial's prospects in some ways. While full legalization may be a difficult reach in a Republican-controlled Senate, many industry leaders think that a pro-cannabis banking bill could make it through in the next Congress.

Some believe Congress will pass the Secure and Fair Enforcement (SAFE) Banking Act soon in the new year. The SAFE Act actually passed the House of Representatives last year and has bipartisan support in the Senate. With a more cannabis-tolerant Republican senator set to head the Senate Banking Committee in the new Congress, the SAFE Act may actually pass.

The SAFE Act would indemnify national banks from liability in serving the cannabis industry, as long as those customers are complying with state laws. Allowing big banks to lend to cannabis companies would bring down operators' costs of capital, enabling them to raise money at lower rates.

However, It would also open up Innovative Industrial Properties to more competition from big banks. That means that Innovative may have to lease out its properties at lower rates going forward, which would depress its impressive returns.

The Strengthening the Tenth Amendment Through Entrusting States (STATES) Act is also in play. That piece of legislation would remove section 280e for cannabis operators, which basically forces U.S. cannabis companies to pay a huge amount in taxes far beyond those of other similar businesses. Greenwave Advisors analyst Matt Karnes notes that profitable cannabis operators pay out 50% to 60% of their operating cash flow as taxes today.

The passage of the STATES Act would also allow cannabis operators to keep more of their profits, which they could then use to fund more of their own growth, rather than having to rely on Innovative Industrial's sale-leaseback schemes.

What should investors do with Innovative Industrial Properties today?

After its huge rise this year and the prospect for pro-cannabis reform next year, it's possible Innovative could be in for a pause or a giveback of its large gains seen in 2020. However, that doesn't mean you should sell the stock.

After all, new reform may take time to implement, and rival banks may still be cautious about lending to the cannabis industry even after its passage. It's also not a sure thing that the SAFE Act or STATES Act will be passed at all. Meanwhile, Innovative still has an excellent balance sheet to continue its high-return business model. It's also possible that as more and more states approve cannabis legalization, it will mean enough opportunity for everyone involved, Innovative Industrial included, even with more competition.

Still, with the prospect of more pro-cannabis regulation, I'd gravitate more toward the U.S. multistate operators in 2021 over Innovative, as those other businesses have the most to gain from reform. Sure, most don't pay a dividend and they all trade over the counter, but after Innovative Industrial's big run, I think bigger stock gains could be had in that other part of the U.S. cannabis industry next year.