Please ensure Javascript is enabled for purposes of website accessibility
Free Article Join Over 1 Million Premium Members And Get More In-Depth Stock Guidance and Research
By Billy Duberstein - Dec 31, 2020 at 7:50AM

Now may be a good opportunity to buy shares of this transformative industry leader, which is down nearly 40% from recent highs.

2020 has certainly been an interesting year for the stock market. It's also been an exciting one for plant-based meat innovator Beyond Meat ( BYND -4.08% ). Although Beyond Meat is up 66.5% for the year and has quintupled its IPO price, the stock has recently retreated about 40% from its 2020 high and nearly 50% from its post-IPO high. 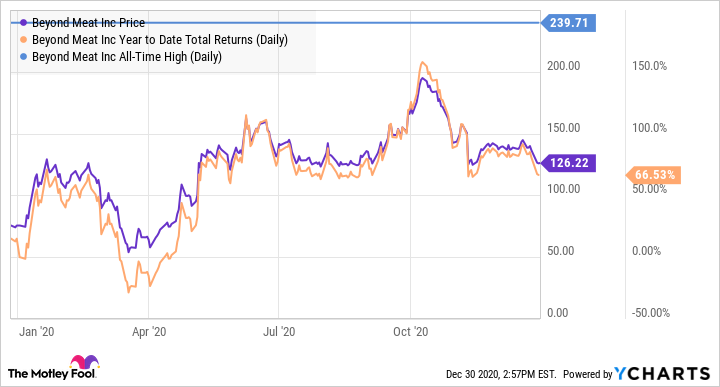 Huge volatility like this usually comes with great excitement, and there is clearly excitement out there for Beyond Meat's market opportunity. Though the stock is by no means cheap on current metrics, it's not as expensive as some other tech darlings, and the most recent post-earnings pullback could be an opportunity to pick up shares of a long-term winner. 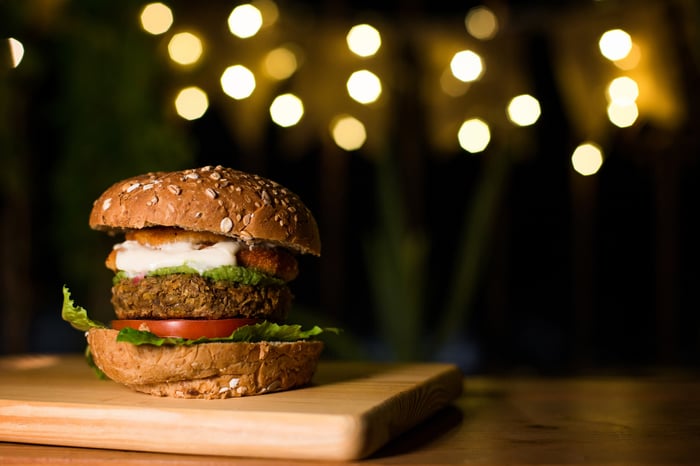 Beyond Meat has two new versions of the Beyond Burger coming out in 2021. Image source: Getty Images.

Why Beyond is down recently

Beyond's stock has taken a hit recently for a good reason. The company stunned investors with just 2.7% growth last quarter after growing 69% in the second quarter. Management attributed this to delays in restaurant rollouts and declines in the food service business. Meanwhile, as consumers stockpiled Beyond Meat products in the second quarter, they digested what they'd bought in the third quarter.

It's never a great sign when a hot growth stock decelerates significantly. It could be a sign of either declining demand or increased competition. However, as of now, I'm leaning toward believing management's explanation. Not only is this global pandemic a weird time, but there are plenty of reasons to still believe the longer-term Beyond Meat story heading into 2021.

The plant-based meat is still tiny, but growing

Meat shortages during the pandemic and millennial concerns over the environment and animal welfare have been cited as reasons for the renewed interest. However, it's also due to better taste, innovative research and development, and creative marketing from Beyond Meat and others in the space, such as the idea to put Beyond Burgers in the meat section of the supermarket, not the vegetarian section.

Beyond Meat is still innovating and aggressively expanding

Despite last quarter's slowdown, Beyond Meat management isn't taking its foot off the gas. The company has kept up its R&D spending and is rapidly expanding distribution. In just the past two months, Beyond Meat unveiled two new versions of its Beyond Burger, which is still the company's core product. Those will hit shelves in early 2021. Beyond also just introduced its new Beyond Meatballs products in Costco ( COST 0.65% ) stores in December.   Beyond Meat even launched its version of minced pork in China, where it is an early mover and where there is currently a pork shortage. Rival Impossible Foods hasn't yet gotten regulatory approval in the world's second-largest economy yet.

Importantly, CEO Ethan Brown appears to be a visionary leader with the right focus. Consistently dropping prices as the company gains more scale, Brown hopes to get Beyond Meat products to price parity with traditional meat in the near future. On a recent podcast, he noted that he's currently much more concerned with grabbing market share than optimizing for margins. That's definitely the correct strategy since he's trying to engineer a much bigger sea change in consumer buying habits. First-mover brands tend to have an advantage over those that try to break in later on.

As food service opens up, big opportunities with popular partners

Finally, 2021 should see a return to growth for Beyond Meat's food service segment, which has obviously been hurt by the pandemic. Not only are consumers shying away from eating indoors this year, but large restaurants are penny-pinching and delaying some new experiments with alternative meat suppliers.

Still, Beyond has a number of large restaurant customer partnerships in the works. In fact, Beyond currently has partnerships with four of the largest quick-service restaurant chains around: Starbucks ( SBUX -0.16% ), Yum! Brands' ( YUM -1.34% ) KFC and Pizza Hut, Dunkin' Brands Group ( DNKN ), and McDonald's ( MCD 0.21% ). The McDonald's opportunity is somewhat controversial, as McDonald's will likely not be branding the new McPlant with Beyond's brand, and will only likely use Beyond as one of several suppliers.

Still, UBS analysts think that even if Beyond is only one of three suppliers, it could mean another $120 million annual revenue opportunity. That's significant, as Beyond made just over $400 million in revenue over the past 12 months.

The transfer from traditional meat to plant-based substitutes will be long, likely with bumps in the road. Yet with new-age, mission-driven companies like Beyond and Impossible aggressively innovating in these new technologies, plant-based solutions should continue to improve and drop prices to better compete with traditional meat. The most recent pullback could therefore be an opportunity to get in on this long-term trend.