Shares of Gannett (NYSE:GCI) were moving higher today as the company seemed to get a boost from news that rival Tribune Publishing (NASDAQ:TPCO), the publisher of newspapers including the Chicago Tribune and New York Daily News, may be acquired. 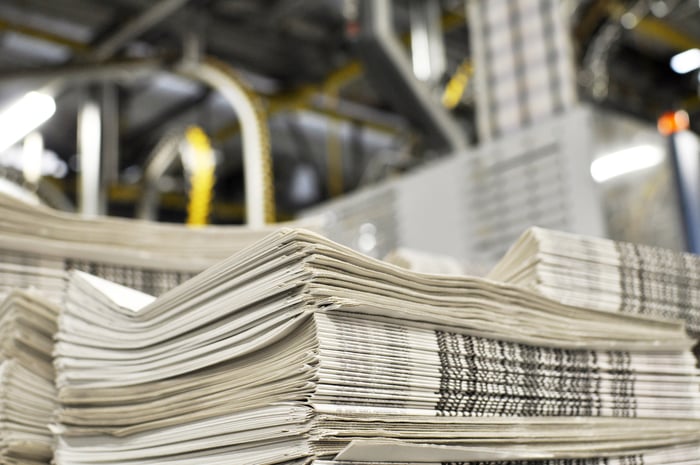 Hedge fund Alden Global Capital, which already owns 32% of Tribune Publishing, said in a filing this morning that it had proposed purchasing the remainder of the company in a letter of inquiry on Dec. 14 at a price of $14.25 per share, valuing the company at $520 million. Tribune reached a high of $14 per share in trading this morning.

Tribune has not yet responded to the letter, and it's unclear if it will accept the offer. However, Alden's proposal shows continued interest in the newspaper industry , even as print publications continue to decline.

Gannett owns USA Today and more than 140 local media brands, including the Detroit Free Press, Arizona Republic, and Austin American-Statesman. A merger with New Media late last year has not been enough to save Gannett, as the stock is down nearly 50% in 2020 and the pandemic seems to have only accelerated the shift in advertising away from print channels to digital ones.

Still, interest from any newspaper buyer is likely to benefit Gannett as it shows potential value in a company struggling to turn a profit in a declining industry.

Alden has a reputation for acquiring newspapers and slashing costs in order to squeeze out remaining profits, which may be one reason why Tribune might reject a sale as an Alden takeover would seem to hurt the long-term interests of its brands.

Nonetheless, newspaper businesses are under a lot of pressure in today's environment, and a buyout may be the best option for struggling companies like Gannett and Tribune.