Please ensure Javascript is enabled for purposes of website accessibility
Free Article Join Over 1 Million Premium Members And Get More In-Depth Stock Guidance and Research
By Leo Sun - Jan 5, 2021 at 7:30AM

This high-growth company will face tough comparisons this year.

Zoom Video Communications' ( ZM -3.46% ) stock soared nearly 400% last year as the COVID-19 pandemic turned its video conferencing platform into a household name. However, investors might be wondering if the stock can still generate multibagger gains this year as the pandemic ends.

Let's take a fresh look at Zoom's strengths, its growth rates, and its valuations to see if its high-flying stock could at least double again this year.

Why did people flock to Zoom?

Zoom attracted millions of users throughout the pandemic because it was easier to use than many other video conferencing platforms. Its free tier, which provided group calls for up to 40 minutes, roped in new users and nudged them toward paid tiers, which extended the time limit and added premium features like cloud-based recording, transcripts, and single sign-ons. 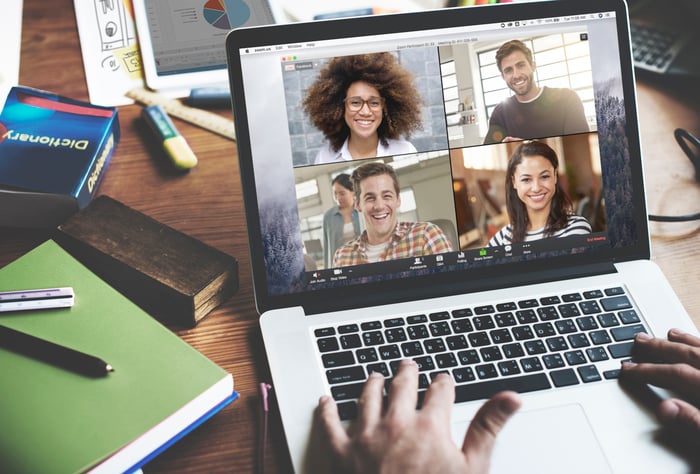 Zoom had already generated impressive returns prior to the pandemic thanks to its growth among enterprise and education users. Its revenue rose 88% to $622.7 million in fiscal 2020, which ended last January, as its adjusted net income jumped 514% to $101.3 million.

But in the first nine months of 2021, Zoom's revenue surged 307% year over year to $1.77 billion as more people worked, attended classes, and kept in touch with friends and family remotely throughout the pandemic.

Its gross margin contracted year over year due to a higher mix of free users, but its adjusted net income still grew nearly 11-fold to $630.3 million. Zoom's revenue and earnings growth accelerated significantly throughout the first three quarters of the year:

During the peak of the pandemic last April, Zoom claimed its meetings were hosting 300 million active participants per day. That figure likely rose throughout the second and third quarters.

Zoom's growth among large enterprise customers also accelerated. Its total number of customers contributing more than $100,000 in revenue over the past 12 months rose 90% year over year in the first quarter, 112% in the second quarter, and another 136% in the third quarter.

But can Zoom maintain its momentum?

Analysts expect Zoom's revenue and earnings to rise just 38% and 3%, respectively, next year as the pandemic passes -- but investors shouldn't put too much faith in those forecasts, since no one can be sure when the crisis will end.

However, Zoom could still attract users and companies that don't want to tether themselves to those big tech ecosystems. Its strong brand recognition, which has made it synonymous with video calls, could also prevent users from trying out competing services.

Second, the influx of free users, especially among schools, has been throttling Zoom's gross margins. However, its operating margins are improving as its revenue growth outpaces its operating expenses:

But during last quarter's conference call, Zoom CFO Kelly Steckelberg warned that the company's operating margins would continue to contract sequentially as it expands its sales teams and invests in new products like its voice-only Zoom Phone platform and its OnZoom marketplace for online events.

It's also unclear if Zoom can reduce its dependence on free users to boost its gross margins again. Steckelberg expects Zoom's gross margins to remain "consistent" with its third quarter throughout fiscal 2022 before expanding again -- but that could be challenging if its revenue growth decelerates after the pandemic ends.

I recently warned that Zoom's valuations were too hot to handle, and I stand by that assessment. At $340 a share, it's trading at more than 100 times forward earnings, and nearly 30 times next year's sales.

That might seem like a reasonable valuation, especially compared to other high-growth tech stocks, but it's a high price to pay for a company that faces uncertain post-pandemic returns. Pandemic-related fears could still drive this stock higher this year, but I believe fundamental gravity and concerns about its long-term growth will prevent its stock from doubling or replicating its jaw-dropping gains from 2020.

Is This an Overreaction to Zoom's Earnings?