Please ensure Javascript is enabled for purposes of website accessibility
Free Article Join Over 1 Million Premium Members And Get More In-Depth Stock Guidance and Research
By Anders Bylund - Jan 6, 2021 at 8:49AM

Yes, the insurance technology expert had some news to share. No, those tidbits really didn't move the stock. Here's the real story.

Shares of fintech company Lemonade ( LMND -6.97% ) soared 76.8% higher in December 2020, according to data from S&P Global Market Intelligence. The provider of low-cost insurance services with a social conscience and a completely computerized business model expanded its international footprint, won an important legal case, and closed the year with more than 1 million active customers.

Lemonade launched a renters insurance service in France last month. That's the third European country to get a helping of citrus-flavored insurance, following a German launch in 2019 and an expansion into the Netherlands earlier in 2020.

Two weeks later, a French court ruled that Lemonade can use the color pink (pink lemonade, you know) to market and promote its financial services in that country. Deutsche Telekom's French trademark on a specific shade of magenta was found to be relevant only in the telecommunications market, and the court slapped down Deutsche's lawsuit because Lemonade isn't hurting the company's business in an unrelated market. It was a reversal from an earlier ruling against Lemonade in a similar case in Germany, where the company now is forbidden from using certain shades of pink.

Finally, Lemonade reached 1 million active customers right at the end of December. The company's press materials underscored how Lemonade achieved this milestone in roughly four years while traditional giants of the insurance industry reached the same target at least 19 years into their operating histories. 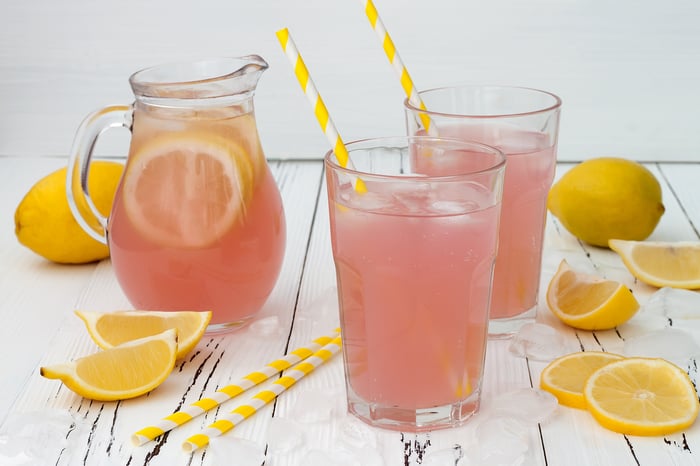 Here's the crazy part of Lemonade's gains in December. The events listed above actually didn't move the stock all that much. The two largest single-day jumps came on days where Lemonade had no news of its own and the broader market was trading sideways. Lemonade's shares closed 14.1% higher on Dec. 10 while the S&P 500 posted a small loss. On Dec. 23, Lemonade rose 12.9% as the S&P 500 increased by a measly 0.1%.

That's life in the fast lane. Pure market momentum is driving Lemonade's stock skyward right now, and investors are expecting that saga to continue playing out for years to come.

Lemonade is a fast-growing business with the ambitious long-term goal of disrupting the insurance industry, where American net premiums added up to $1.32 trillion in 2019. Investors hardly need the excuse of fresh news to hit the buy button for Lemonade stock. I speak from experience, having started a Lemonade position of my own last week. This company is going places, and the actual business is quietly creating value behind the scenes most of the time.