Altria (NYSE:MO), the largest tobacco company in America, is often considered a stable dividend stock. It pays a high forward yield of 8.4%, and it trades at just nine times forward earnings. It's raised its payout every year since spinning off its overseas business as Philip Morris International (NYSE:PM) over a decade ago, and it spent just over three-quarters of its free cash flow on its dividends over the past 12 months. 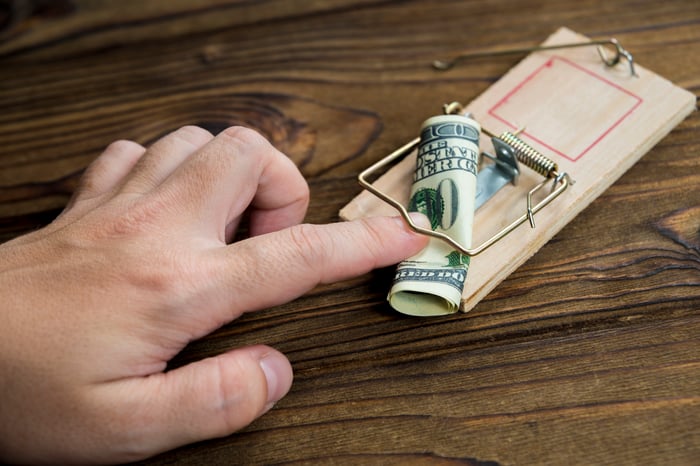 Altria's dividend yield is hovering near historical highs because its stock price has declined about 30% over the past five years. That decline effectively wiped out all of its dividend gains.

Altria's stock is tumbling because its core business faces long-term headwinds. Adult smoking rates in the U.S., where it generates all of its revenue, have dropped from 20.9% to 14% between 2005 and 2019, according to the CDC, and could hit single-digit levels within a few years.

Altria is also ceding the cigarette market to domestic rivals like British American Tobacco's (NYSE:BTI) Reynolds American. In the first nine months of 2020, Altria's retail share of the domestic cigarette market fell 70 basis points year-over-year to 49.2%, with declines across its Marlboro, premium, and discount brands.

Rising state and excise taxes across the U.S. are exacerbating that pressure. A pack of cigarettes now costs more than $10 in several states, which is likely causing more smokers to quit. Traditional cigarettes are also facing fresh competition from electronic cigarettes, other vaping devices, and legalized marijuana.

Over the past decade, Altria countered those headwinds by cutting costs, raising prices to offset its declining shipments, and repurchasing shares to boost its earnings per share. But those strategies are likely unsustainable.

Over the past 10 years, Altria already reduced its headcount and outstanding shares by 26% and 11%, respectively. It also rescinded the remaining $500 million in its $1 billion buyback plan last April due to uncertainties regarding the pandemic, and only repurchased a small amount of shares throughout the rest of the year. It still raised its prices, but rising taxes could limit its future price hikes.

Altria's adjusted shipments of cigarettes, which exclude trade inventory movements and other factors, dropped 7% last year and slipped another 2% year over year in the first nine months of 2020.

4. Altria's not offering any long-term solutions 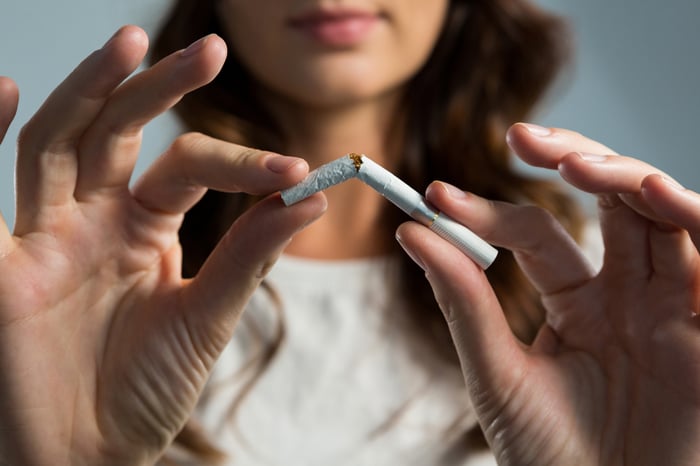 In response, Altria took a $1.8 billion stake in the cannabis company Cronos Group (NASDAQ:CRON) and made a $12.8 billion investment in the e-cigarette maker Juul.

But the former isn't generating any meaningful revenue yet, and the latter caused a disastrous writedown as the brand struggled with safety issues and tighter regulations of e-cigarettes.

Altria recently started selling Philip Morris International's iQOS devices, which heat sticks of tobacco instead of burning them. But it's still too early to tell if iQOS will gain momentum domestically, as it did in several overseas markets for PMI, as a "modified risk" device for smokers.

Altria also believes its On nicotine pouches, which are being marketed as alternatives to chewing tobacco, can diversify its business away from cigarettes. Altria is now selling On products at over 56,000 retailers, but the pouches are still being closely scrutinized by the FDA.

Altria's fundamentals initially seem stable. Analysts expect its revenue and earnings to rise 5% and 4%, respectively, this year, which indicates its balancing act of cutting costs and raising prices is still working.

However, Altria still has a ridiculously high debt-to-equity ratio of 13.4, partly due to its desperate investments, and its long-term debt of $27.8 billion could cut into its dividends when its balancing act finally fails.