Please ensure Javascript is enabled for purposes of website accessibility
Free Article Join Over 1 Million Premium Members And Get More In-Depth Stock Guidance and Research
By Beth McKenna - Jan 8, 2021 at 10:00AM

Shares of the smart-home security products specialist got a boost from two catalysts.

Shares of Arlo Technologies ( ARLO 0.13% ), a maker of smart-home security products, soared 48.1% in December, according to data from S&P Global Market Intelligence. For context, the S&P 500 returned 3.8% last month.

Arlo stock has kicked off 2021 on a strong note, as the small-cap tech stock is up 7.3%, compared to the broader market's 2% return through Thursday, Jan. 7.

We can attribute Arlo stock's robust performance last month to two catalysts. First, on Dec. 1, shares surged 31.2% following news that the company appeared to have won an exclusive distribution deal with Apple. As my colleague Evan Niu reported at the time, "The Apple Store listing that got the market's attention is for a pair of Arlo Ultra 4K wireless security cameras, which closely resemble the Arlo Ultra 2 camera the company sells on its own website, but which has a slightly different model number."

Then on Dec. 8, shares popped 14.5% following an announcement by cloud-based communications software company Calix that it had inked a strategic distribution partnership with Arlo. Calix will offer Arlo's smart security camera "as part of EDGE Suites so communications service providers (CSP) can deliver industry-leading video monitoring and do-it-yourself (DIY) security to their subscribers," according to the press release. 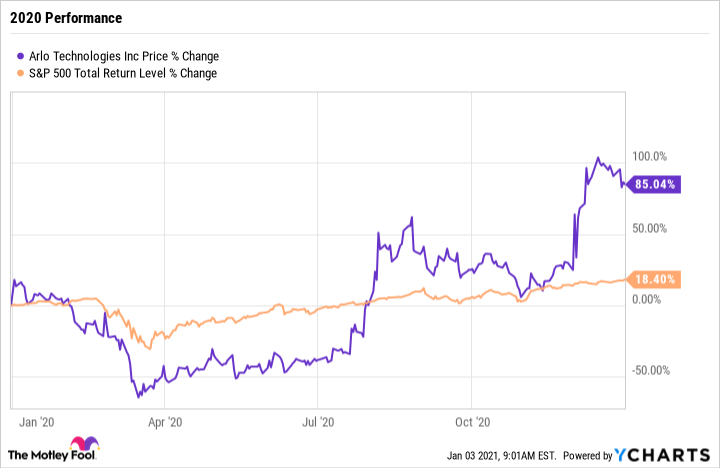