This year may be far from stellar, but it's not likely to be any worse for the cruise line than 2020.

Last year was tough on most industries for the obvious reasons, but it was downright brutal for cruise lines. Efforts to contain the coronavirus pandemic meant names like Royal Caribbean ( RCL -3.51% ) and Norwegian Cruise Line Holdings ( NCLH -5.82% ) spent much of 2020 on hold, waiting for travel restrictions to ease. Even when they did, consumers were hesitant to step aboard a ship that forces passengers into such close proximity to each other for extended periods.

Of all the maritime cruise line stocks, though, Carnival ( CCL -5.15% ) has arguably suffered the most. Shares lost 58% of their value between the end of 2019 and the end of 2020, failing to make any sort of meaningful recovery even after the broader market began to recover in April.

Should shareholders expect more of the same bad news now that COVID-19 vaccines are finally being distributed and administered? Nope. Even if it's a "things can't get any worse" dynamic, Carnival shares should start to surface in 2021. 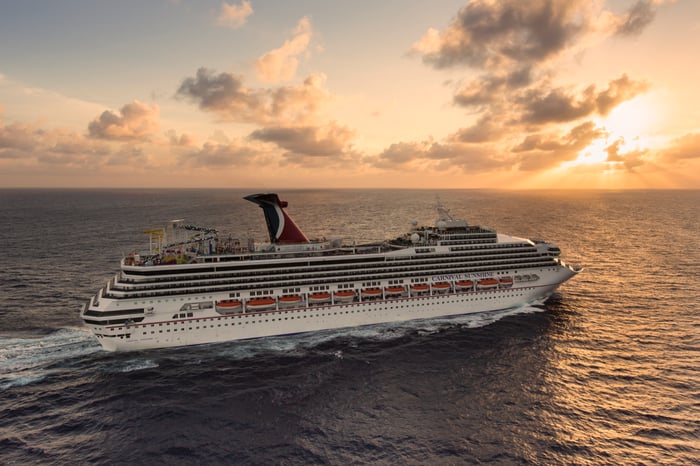 The company's fiscal fourth-quarter numbers aren't in yet, but through the first three quarters of 2020, revenue of $5.6 billion is down 65% year over year. And, considering its voyages have been suspended for months now, Carnival's upcoming fourth-quarter report won't help any. When all is said and done, Carnival's 2020 projected top line of $5.7 billion will be 73% less than 2019's $20.8 billion, leading to a full-year operating loss of something on the order of $8.9 billion. That's rough, and it more than explains the stock's decided weakness.

This year isn't off to a much better start, either. Just this week, Carnival's Princess brand announced it was extending its suspension of voyages at least through the middle of May. Its P&O Cruises Australia as well as Holland America have also, just this week, postponed the resumption of trips for the next several weeks. As it stands, no Carnival-owned ship is going to set sail from the United States at least until April.

The end result? Analysts tracking the company estimate Carnival will lose another $3.5 billion this year on $7.9 billion in revenue, though given the sheer uncertainty of everything, it's an estimate that should be accompanied by a mental footnote of sorts. That is, nobody really knows how much worse the COVID-19 pandemic could get before vaccines start to reverse its spread.

And even if the vaccines do work well, cruise lines have a long journey to recovery. SpringOwl Asset Management CEO Jason Ader said in an interview with Yahoo! Finance last month, "I don't think you'll see a return to peak profitability in the cruise industry until 2030." That's a long time for investors to wait.

With storm clouds clearing, think destination rather than starting point

While 2021 may bring a much-needed reversal of fortune for Carnival, the company isn't expecting to turn a full-year profit again until 2022. More canceled trips will only push that time frame back. There are a couple of investing realities, however, that just might turn this company and its stock into something of a Cinderella story this year.

One of those realities: Economically disruptive events tend not to have the lingering impact often suggested at the time things are unraveling. The subprime mortgage crisis, Greece's debt meltdown, and 2009's swine flu outbreak all seemed at the time to be dishing out insurmountable damage. Now they're all faded memories. Capitalists and consumers always find a way of reconnecting with one another, and usually sooner than might be expected.

The other reality investors must remember is that stocks tend to ebb and flow based on their underlying companies' fiscal trajectories rather than their absolute performances. As long as Carnival is making what appears to be progress, the stock itself should find a tailwind (even if it's an inconsistent one). To this end, know that analysts are projecting 2021's probable fiscal turnaround to continue into 2022 and 2023. This may well be enough for Carnival shares to keep unwinding last year's big loss. 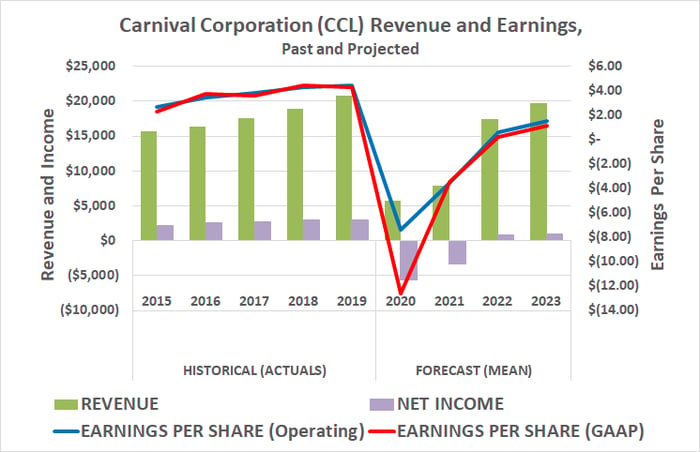 Don't misread the message. Carnival isn't a top pick right now for the faint of heart, or investors in or nearing retirement. This crowd needs more certainty and less volatility than this ticker can deliver right now.

But for long-term investors who can stomach the risk and volatility, last year's losses are this year's opportunity. Just be realistic about your expectations.