The Nasdaq Composite (NASDAQINDEX:^IXIC) has been exceedingly resilient over the past year. Even when the market is moving lower, the Nasdaq has tended to find ways to bounce back. That's what's happened so far on Monday, as the index was down well over 1% early in the day but bounced back to just a 0.5% loss as of 12:45 p.m. EST.

There were plenty of stocks that doubled in 2020, especially within the tech industry. Companies that were able to meet the needs of businesses looking to build a digital presence and workers trying to find ways to get things done from home did exceedingly well. Yet even as some of those stocks have pulled back sharply to begin 2021, NVIDIA (NASDAQ:NVDA) and Advanced Micro Devices (NASDAQ:AMD) are still headed higher. Let's look more closely to see why they're on the rise and what could lie ahead for the two chipmakers . 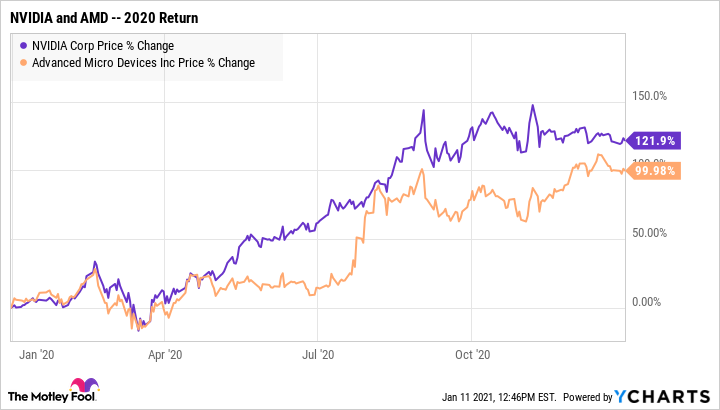 Both NVIDIA and AMD produced such healthy gains in 2020 because they played vital roles in supplying the tech industry with the innovative chips they needed in order to meet unprecedented demand. With the pace of digital transformation reaching a fevered pitch, both companies capitalized by coming out with products that the marketplace immediately jumped on.

NVIDIA had a number of elements push its stock higher. With so many enterprise customers building data centers to store all the information they collect, NVIDIA's A100 graphics processing units (GPUs) helped produce explosive growth in the company's data center segment. In addition, with so many people stuck at home during the COVID-19 pandemic, interest in video games soared. That in turn heightened demand for top NVIDIA gaming products like its RTX graphics processing unit line. 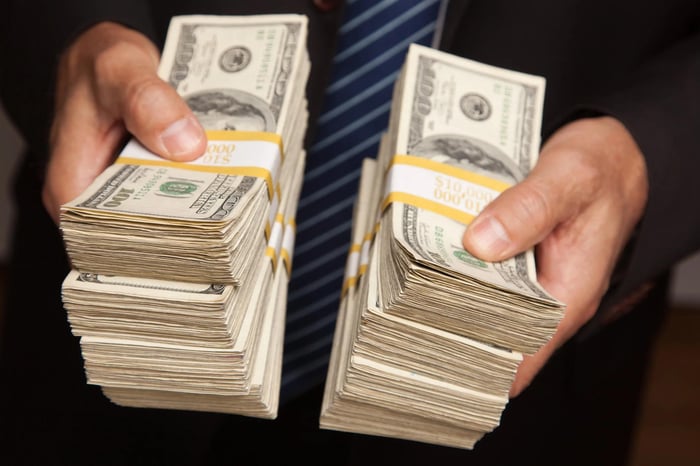 NVIDIA also turned to the mergers and acquisitions front to stoke its growth. The company announced the planned purchase of ARM Holdings. With a $40 billion price tag, the buy is a big commitment, but NVIDIA is convinced that it's a great way to grow its business and gain access to markets like mobile chips. It should also help boost NVIDIA's capacity to become a more self-sufficient company overall.

Meanwhile, AMD also found ways to stand out from the competition. The company's central processing units (CPUs) became exceedingly popular in the coronavirus crisis, helping it build up market share against longtime rival Intel (NASDAQ:INTC). New products like the Ryzen desktop processor played a big role in AMD's ascent, and the company also scored wins in the video gaming industry as its chips made their way into new video-game consoles like the PlayStation 5 and Xbox Series X.

At the same time, AMD has mergers and acquisitions (M&A) plans of its own. It's still looking to complete its announced deal to buy Xilinx (NASDAQ:XLNX). The move would help Advanced Micro Devices get a leg up in several areas of the semiconductor business, because Xilinx's field-programmable chip arrays allow for unprecedented customization and flexibility in meeting a wide variety of different user needs.

Can AMD and NVIDIA keep climbing?

Already this year, both AMD and NVIDIA are beating the Nasdaq and the broader stock market. That's largely because investors are excited about the prospects for the ongoing digital revolution, especially amid signs that a full recovery from the COVID-19 pandemic might take a lot longer than initially hoped.

NVIDIA and AMD have both kept up the pace in releasing cutting-edge products to give their customers what they want. That innovation isn't showing any signs of letting up soon. If they can keep wowing their clients, then both AMD and NVIDIA could easily keep climbing in 2021 and beyond.