Firming crude oil prices got a further boost recently with Saudi Arabia's decision of an additional cut in its oil output. While the development is bullish, it doesn't remove the inherent volatility in oil prices. The Kingdom has pledged for the additional cut in February and March, after which it may resume production levels.

Meanwhile, other producers could boost output, destabilizing prices. So, while investing in energy stocks now, as always, you should focus on companies that can do well irrespective of oil prices. Here are three of the safest dividend stocks in the energy sector right now.

With a history of more than 65 years, TC Energy (NYSE:TRP) is a top Canadian energy infrastructure company. It operates natural gas and liquids pipelines in the U.S., Canada, and Mexico. It has a strong asset base in two important supply regions -- the Western Canada Sedimentary Basin (WCSB) in Canada and the Appalachian Basin in the U.S. There is a strong demand for infrastructure to transport oil from Canada's oil sands, and TC Energy's WCSB assets are usually fully utilized at attractive rates.

The company's gas transmission operations are largely regulated, which allows it to recover costs through tolls. The approved rates allow TC Energy to recover the capital invested in building the pipeline, in addition to a return on the invested capital. Earnings from regulated assets are largely stable. Moreover, TC Energy's other assets are also backed by long-term fee-based contracts. Around 95% of the company's earnings in 2020 came from assets that are either regulated or backed by long-term contracts. Such assets allow TC Energy to generate steady income regardless of short-term fluctuations in commodity prices. 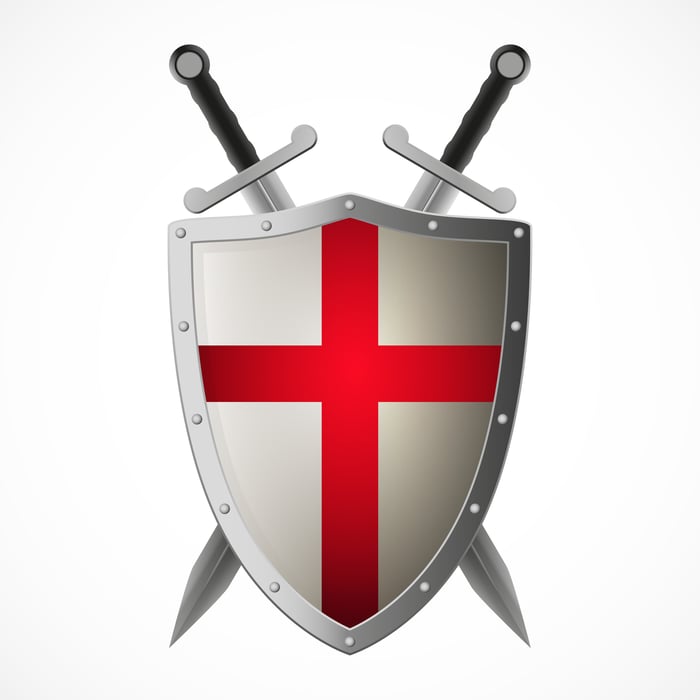 It is due to this low-risk model that the company expects to generate its previously guided EBITDA of 9.3 billion Canadian Dollars in 2020, despite the effects of COVID-19 and low commodity prices. TC Energy has raised its dividends for 20 consecutive years. With its CA$37 billion capital program, it can surely continue to raise its dividends in the future, too.

Enterprise Products Partners (NYSE:EPD) is a top midstream MLP that transports, stores, and processes crude oil, natural gas, and refined products. It earns a fee for these services, which isn't directly linked to the prices of the specific commodities. Enterprise Products raised its fourth-quarter distribution (dividends that MLPs pay) by 1.1%, which represents 22 consecutive years of distribution increases by the company. 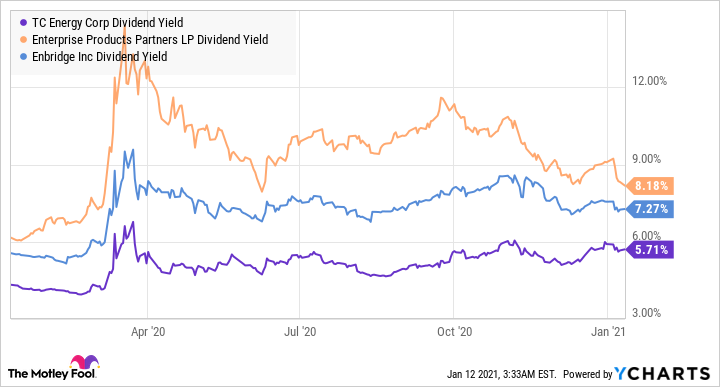 The second factor contributing to Enterprise Products' steady growth is the diversity and scale of its operations. Its natural gas liquids operations offset weakness in oil and gas operations last year. Natural gas liquids such as ethane, propane, and butane are used as inputs to produce wide-ranging products such as plastics, paints, chemicals, and so on.

Enterprise Products generated distributable cash flow of 1.6 times its distributions for the first nine months of 2020. What's more, it has around $3.9 billion of projects under construction. That sets it up to continue its distribution growth streak in the years to come.

Like TC Energy and Enterprise Products, Canadian energy company Enbridge (NYSE:ENB) too has an impressive track record of dividend growth. The company recently raised its payouts for the 26th consecutive year. Further, Enbridge expects to grow its per-share distributable cash flow by an average 5% to 7% through 2023. Enbridge's liquids pipelines contribute nearly half of its earnings. A little more than 40% of its earnings come from its regulated gas transmission and distribution business, which provide it with stability if liquids earnings fall.

Enbridge is working on several growth projects across segments and has roughly 10 billion Canadian dollars of secured growth projects that it plans to complete in the next three years. These should fuel its earnings growth in the years to come. The company has commenced construction work on the U.S. portion of its Line 3 Replacement project, which is expected to become operational in the fourth quarter of 2021. Enbridge is also expanding its renewables operations, which currently contribute around 4% of its earnings.

Enbridge's debt-to-EBITDA ratio of 4.7 is within its target range of 4.5 to 5 times. In short, this midstream operator looks extremely well-placed to continue growing in the decades to come.