Please ensure Javascript is enabled for purposes of website accessibility
Log In Help Join The Motley Fool
Free Article Join Over 1 Million Premium Members And Get More In-Depth Stock Guidance and Research
By Dan Caplinger - Jan 15, 2021 at 5:42AM

There are big bets against these stocks after a strong 2020.

The stock market has been on a tear since hitting the bear-market low in March 2020, and many investors are completely befuddled by the strong performance. With so many uncertainties in the picture -- the COVID-19 pandemic, geopolitical tensions, and economic devastation for tens of millions of Americans -- it doesn't entirely feel right that the market could go up.

Moreover, some individual stocks have produced absolutely unbelievable returns. Gains of nearly 750% for Tesla (TSLA -0.32%) are only the start of a long list of companies whose shares generated multibagger returns in just a single year. It's enough to make value investors cringe.

When investors believe a stock has gotten ahead of itself, they can sell its shares short. Short-selling is a bet against a stock. You borrow shares from a stockholder through your broker, sell them, and then hope to buy them back at a lower price to return them to the lender.

Short-selling works great in a stock market crash. But it's risky. There's no theoretical limit to the amount you can lose with a short sale. Just ask any of the many investors who sold Tesla shares short in 2020. 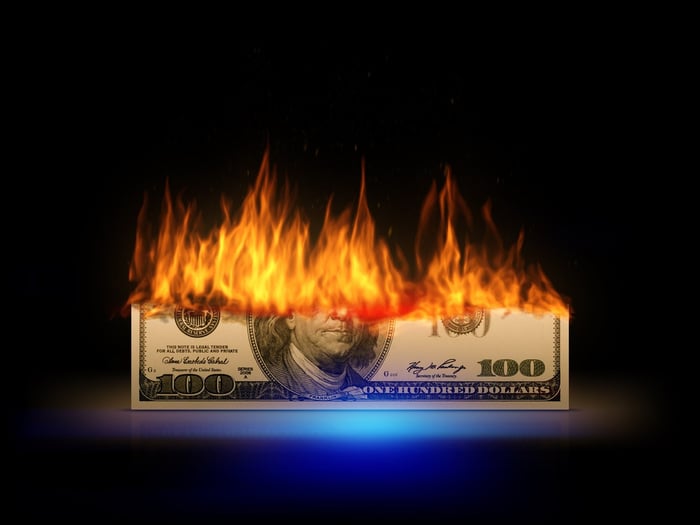 Lately, short-selling activity has picked up, and dozens of stocks have a considerable portion of their entire available shares currently sold short. Below, we'll look at three popular stocks for short-sellers that have already hurt those betting against them -- and could utterly destroy short-sellers' portfolios in the coming year if things go right for their businesses. 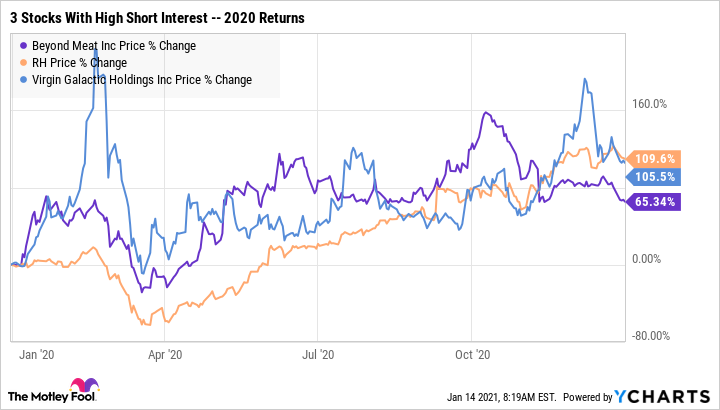 Plant-based protein has gotten a lot of attention in the food industry, and Beyond Meat (BYND -0.94%) has been the leader in the fast-growing niche. Shares of the stock were up 65% last year as the share price rebounded from declines following its mid-2019 IPO.

However, short-sellers are betting heavily against the stock. As of Dec. 31, nearly 13.7 million shares of Beyond Meat were sold short. That's almost a quarter of the company's available float of 56.2 million shares of publicly traded stock, according to Morningstar.

Beyond Meat has seen sales soar in the past couple of years. But investors were stunned when the plant-based protein specialist said that year-over-year revenue rose at less than a 3% pace in the third quarter of 2020. That prompted some to conclude that the boom in meat alternatives was over and done with.

Yet the trends that inspired interest in plant-based meat substitutes are still firmly in place. Disruptions from the pandemic have changed customer behavior, reducing trips to restaurants that feature Beyond Meat products and putting pressure on the company's top-line performance. That hasn't stopped Beyond Meat from forging new partnerships and seeking to grow its scale as quickly as it can, even at the expense of current sales and profits. If more investors catch on to Beyond Meat's long-term strategy, it could keep the stock moving higher and hurt short-sellers badly.

RH (RH -4.56%) could be the epitome of a successful turnaround story. The company formerly known as Restoration Hardware almost went out of business in the early 2010s, but since then, RH has reinvented itself as a high-end home-furnishings retailer. Its business strategy has included building out entire gallery locations and an innovative membership model that has lent an extra air of exclusivity and status for shoppers.

Sales have been strong, with third-quarter revenue up nearly 25% year over year. The stock has responded accordingly, more than doubling in 2020. Yet the gains have also brought short-sellers into the picture, with 2.78 million shares sold short representing about 18% of RH's available float, according to Morningstar.

The bearish argument is that RH has gotten well ahead of itself. The stock has quintupled from its March 2020 lows. An earnings multiple above 60 is especially rich for a company in a retail industry that has suffered dramatic disruptions and challenges for several years.

However, RH's vision is still resonating with customers, and the retailer has tapped into pent-up demand from high-income consumers that have focused on upgrading their lifestyles at home. Even once the pandemic gets under control, the urge among high-end shoppers to keep their homes luxurious won't go away -- and if RH keeps tapping into that demand, its sales and profits could grow enough to justify an even higher share price.

Finally, few stocks have more people betting against them than Virgin Galactic Holdings (SPCE 1.06%). The Richard Branson-inspired space tourism company had 43.7 million shares of stock sold short as of Dec. 31, roughly 64% of its nearly 69 million share float. Yet the stock more than doubled in 2020.

Betting against Virgin Galactic might seem like a safer bet than with most companies. For Virgin Galactic to succeed, it has to navigate a series of test flights without mishap. Then it needs to start offering commercial flights to its wait-listed customers, while continuing to scale up to a much more ambitious flight schedule. All the while, if a single thing goes wrong with any launch, it could cause potentially catastrophic backlash for the company.

Yet investors are excited about Virgin Galactic's potential to go beyond space tourism. Using the technology and knowledge it has already developed could help Virgin Galactic offer more conventional air travel at supersonic speeds, shortening transoceanic flights that currently take 12 to 15 hours and making them only two to four hours long. The market for that kind of travel is much higher than space tourism, and it's driving much of Virgin Galactic's valuation.

Virgin Galactic is going through a critical period right now, and there's a lot at stake. However, if it can succeed with its test flights, the stock could see huge gains that would crush short-sellers.

Be careful if you bet against these stocks

There's no guarantee that these three companies will be successful. It could turn out that short-sellers were completely right to bet against them.

However, investors have to weigh the risks along with the probabilities of being right. If things go well for these three companies, then short-sellers won't have any more to celebrate in 2021 than they did in 2020.