Lawrence Rothman, CFA
(TMFLarryrothman)
Author Bio
Lawrence Rothman has been following consumer and retail stocks for The Motley Fool since 2019. Previously, he worked on Wall Street and independent research firms before devoting his attention to finding successful long-term investments for individual investors.
This article represents the opinion of the writer, who may disagree with the “official” recommendation position of a Motley Fool premium advisory service. We’re motley! Questioning an investing thesis -- even one of our own -- helps us all think critically about investing and make decisions that help us become smarter, happier, and richer.

Costco Wholesale (NASDAQ:COST) has built a unique shopping experience for its warehouse club members by offering a wide range of high-quality products at attractive prices and doing so in a convenient manner. But are these good business practices enough to generate the earnings that eventually create dividend greatness? Let's take a closer look.

To answer this question, one needs to dig into the financials of the company, but in this case, it first helps to understand Costco's business model. Costco is not a typical retailer. It charges members an annual fee to shop at its warehouse clubs. Pay the fee and you can buy virtually anything on the store shelves. It sells many of the items in bulk, allowing it to charge lower unit prices than many other retailers. 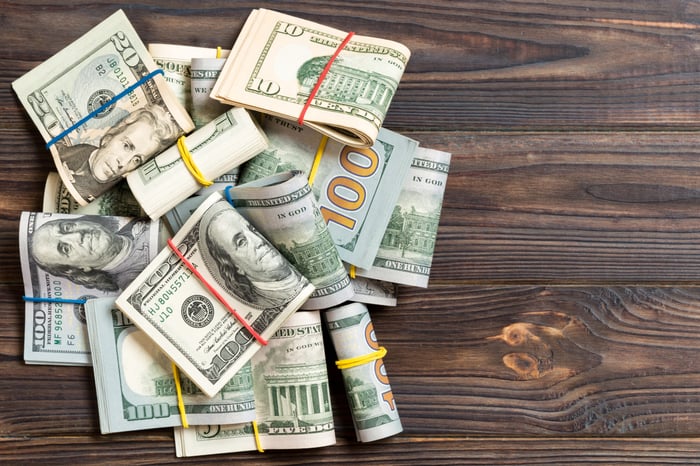 Costco has proven very successful at adding and retaining members. Costco's paid memberships stood at 58.1 million as of the end of August. The company has managed to retain nearly 90% of these memberships worldwide in each of the past several years. That suggests serious loyalty from its members.

A loyal and growing customer base has added up to higher sales and profitability. Costco's fiscal 2020 earnings (which ended Aug. 30, 2020) were $9.02 a share, 69% higher than the fiscal 2015 figure. This translated into increased cash flow. Last year's free cash flow, which is the operating cash flow minus capital expenditures, was over $6 billion. The company has chosen to share this plentiful bounty with shareholders through the easily covered $1.5 billion of dividend payments. That translates to a 22.5% trailing 12-month dividend payout ratio.

Higher profits and cash flow clearly signal that the dividend is safe. But can you rely on that payment increasing each year?

Costco certainly has an impressive track record of regularly raising dividends. After initiating a quarterly $0.10 per share dividend payment in 2004, the board of directors has increased the amount annually ever since. Currently, the quarterly rate is $0.70 per share. With growing profits and a commitment to hiking dividends, this looks good for future increases. After all, it has done so through a couple of recessions and a global pandemic.

While Costco's 0.8% dividend yield is about half the S&P 500's 1.5%, there's more to the story. In 2012, the company paid a large special dividend of $7 per share. It followed this up with outsized special dividend payments in 2015, 2017, and 2020. Last December's special payout was $10 a share. None of these special payouts is reflected in that 0.8% dividend yield figure. While you can't count on these surprise dividend payouts, Costco has shown itself willing to reward shareholders.

Does Costco's dividend history add up to greatness?

While the dividend yield doesn't seem great at first blush, it is important for investors to remember that Costco has shown consistency and will undoubtedly continue raising the payments in the coming years. It doesn't have the track record of some companies, such as Dividend Aristocrats, but it's on its way with a 16-year streak.

Steadily increasing payments -- as well as bonus payments -- put Costco in rarefied air. Mark it down as one of the great dividend stocks currently available for trade.