Please ensure Javascript is enabled for purposes of website accessibility
Log In Help Join The Motley Fool
Free Article Join Over 1 Million Premium Members And Get More In-Depth Stock Guidance and Research
By Adria Cimino - Jan 18, 2021 at 6:45AM

The possibility of a one-dose vaccine may give it an edge over rivals.

So far, some coronavirus vaccine stocks have offered investors enormous gains in a short period of time. For example, Moderna (MRNA 3.78%) stock climbed more than 400% last year as investors bet on its investigational vaccine. At the same time, Pfizer (PFE 0.52%) fell less than 1% last year -- even though the company led the vaccine race along with Moderna. In fact, Pfizer's vaccine eventually became the first to win Emergency Use Authorization (EUA). Moderna earned its EUA about a week later.

Investing in either of those companies for their COVID-19 vaccines brought vastly different results. Now, let's look ahead at the next company to possibly enter the market. Johnson & Johnson's (JNJ -0.09%) candidate is currently in phase 3 trials, and interim data is expected later this month. If all is positive, Johnson & Johnson might be the third to cross the vaccine race finish line. Should investors consider buying shares of the pharmaceutical giant for that reason? Let's take a closer look. 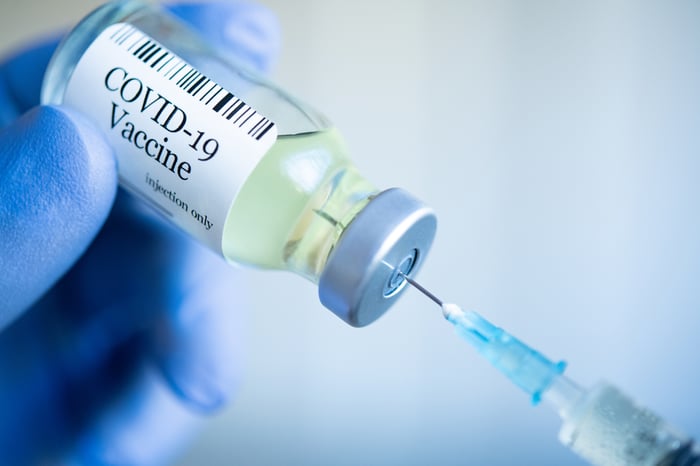 Here, I'll focus on the "Ensemble" trial -- that's the one expected to generate data in the coming weeks. It's also the one that could support an EUA request as soon as next month. And finally, what makes this trial something to talk about is the dosing regimen. The Moderna and Pfizer vaccines both require two doses. Other close-to-market rivals such as AstraZeneca (AZN -0.17%) and Novavax (NVAX 2.04%) also have developed two-dose candidates.

If Johnson & Johnson's investigational vaccine proves safe and effective, the one-dose regimen could give it a significant edge. Of course, patients will like the idea of one jab instead of two. But most importantly, this regimen makes it easier to vaccinate more people. For instance, Moderna aims to produce one billion doses of vaccine this year -- but that will only cover 500 million people. Johnson & Johnson's promise of one billion doses a year will be enough to immunize one billion people.

Johnson & Johnson also has another advantage over Pfizer. It's vaccine candidate can be stored at refrigerator temperatures for at least three months. Pfizer's vaccine requires ultra-low temperatures for transport and storage, which presents a challenge for many potential customers.

Considering these points, the situation is looking bright for Johnson & Johnson. Now, let's look at revenue potential. Like AstraZeneca, Johnson & Johnson has vowed to offer its vaccine on a not-for-profit basis during the pandemic. This means it sells the vaccine at the price it costs to make the product and the company won't earn any profit on sales. So we can't count on the vaccine adding to earnings in the near future. But post-pandemic, the company could raise the price and start benefitting from sales. The pandemic is considered over when the virus is no longer prevalent globally. It's still too early to say when that may be. But Dr. Anthony Fauci, head of the National Institute of Allergy and Infectious Diseases, said in December that it's possible we can return to "normality" around the end of 2021, according to The Harvard Gazette. If that happens, Johnson & Johnson could begin benefiting from vaccine sales in 2022.

Johnson & Johnson may very well become a leader in the coronavirus vaccine market if the one-dose vaccine wins regulatory authorization from the FDA and other health agencies around the world. But I don't expect major share price gains on the news. As we've seen with players Moderna and Pfizer, shares of clinical-stage biotech companies have soared while those of pharmaceutical rivals haven't. That's because the smaller players will depend on vaccine revenue (and will be immediately profiting). Larger companies, with their vast array of commercialized products, won't. And the sheer size of Johnson & Johnson -- with a market cap of more than $421 billion -- means its shares rarely make huge moves.

Still, over time, Johnson & Johnson's profit, revenue, and share price have climbed. (Lower prices for some of its products and lawsuits linked to its talcum powder weighed on annual profit and share performance in 2018.) 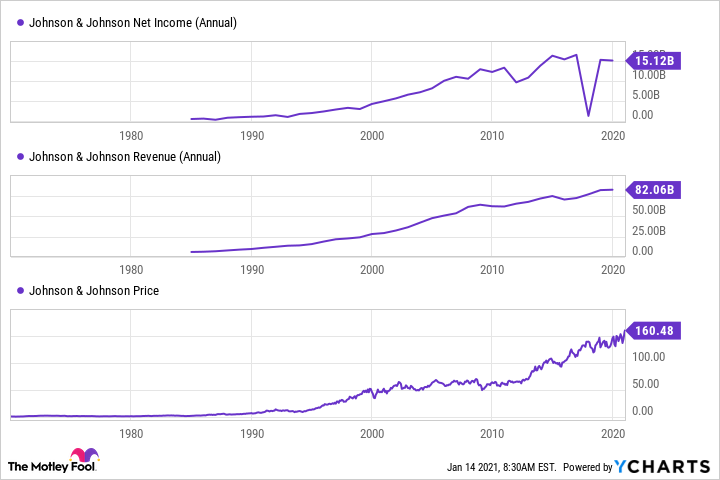 And investors can count on Johnson & Johnson for dividends. The company is a Dividend King, meaning it's raised its dividend annually for at least the past 50 years. The annual dividend now is at $4.04 a share, with a 2.55% yield.